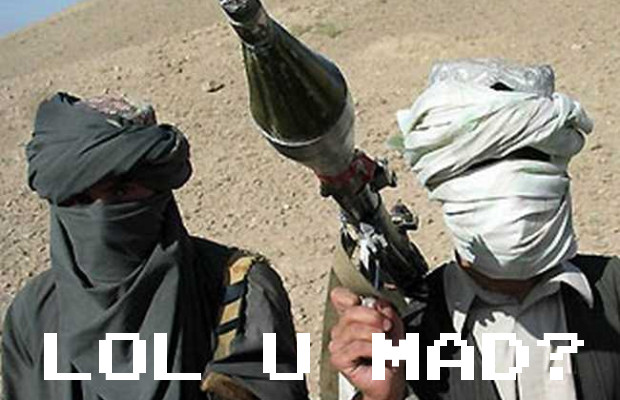 Imagine getting shot by the guy talking horrendous trash. Or being able to call in artillery on him.

ABC News Ran this story about how Afghan soldiers and Taliban talk shit about each other using old-school two-way radios.

"The Taliban will say things like why do you side with the Americans? Why do you sell out your country? You love Obama more than Afghanistan."

Being Mr. Angry Liberals on Xbox live, and with an avatar of Michelle Obama, I find that the Taliban are after my own heart.

Still, on Xbox Live the consequences are only as real as anybody lets their ego get bruised. Controlling irrational, abrupt impulses to send obnoxious nine year-old boys through a window is about as rough as it gets. But out there?

Hakmal said the standard response goes something like, "The Americans are here to help our country function again. They don't want to stay. They want to help, then leave. You should help, too."

Then the shooting starts.

I would totally break protocol if I were an Afghan soldier. And teabag.
#Community    #NOTvideogamesrelated
Login to vote this up!