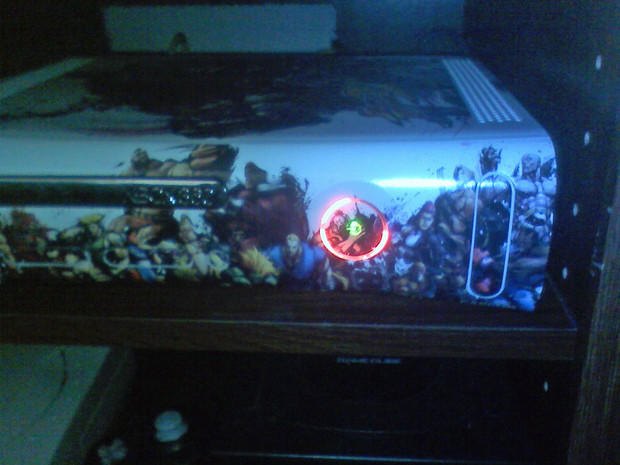 Yep,it finally happened. 12/16/2007 - 2/21/2010, my Xbox 360 lived a short but productive life. It will be shipped off to be repaired this week. Here's how it went down. I had just sat down to play some Bioshock 2 multiplayer,which I was really starting to get into and I decided to check the voice recorder in my apartment for new messages. After playing two messages I heard a strange beep and the screen froze. I thought at first this was just Bioshock 2's infamous freezing glitch, so I switched the Xbox off and back on, only to be greeted by what you see in the header image. I am very sad, mostly because Bad Company 2 comes out a week from today but hey, at least I beat the single player in Bioshock 2.

The worst part is that I was starting to feel immune. I take good care of my systems, I dust them, I don't move them often and never when they're hot. I figured if I cared for the 360 like I do my other systems, then it would last just as long. Boy was I wrong. At this point I just hope that Microsoft comes out with a 360 redesign that is nearly 100% red ring free. I buy systems with the intention of playing them and having them in my collection for the rest of my life. If I have to repair or replace my 360 every two to three years, I don't see it lasting in my permanent collection. Which is sad, because it has an amazing library of games, second only to the Super Nintendo in my mind.

Anyways, my blog title (yes it's a Dream Theater reference) hints at a silver lining to this dark cloud (Dark Cloud reference? I dunno, never played it). Well, when the 360 died, I originally planned to just plug my Playstation 2 in and finish up some games on there, namely Metal Gear Solid 3, Shadow of the Colossus and Persona 3, but I couldn't find my power cable. This combined with the red ring has inspired me to buy a Wii so I can play my Wii games that I bought when I was living with my ex. Unfortunately as you may have heard, the Wii is sold out just about everywhere, so I had to pre-order one from my local Game Stop. I don't mind though. In 1-2 weeks I'll be playing No More Heroes, Mad World, Okami, Boom Blox and Excitebots. I can't wait.
#Community
Login to vote this up!