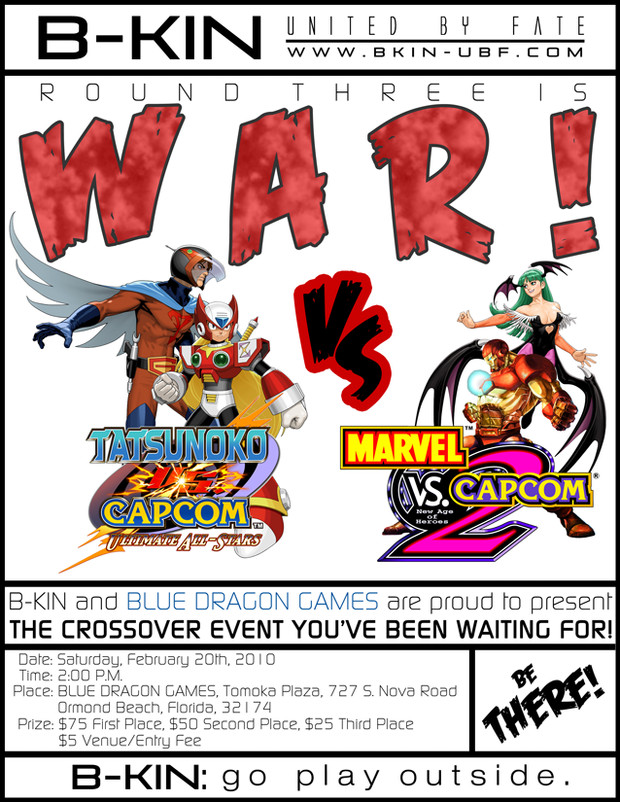 1.) $5 entry fee for each tournament, so $5 to enter into the running for either TvC or MvC2, or $10 for both. These funds go directly to two things: the Prize Pool/Prizes and our setup/administrative costs, which may include venue fees paid in advance by us. ABSOLUTELY NONE of the entry fee money taken directly profits any of our staff, ever. We do not, will not, and will never hold these tournaments for profit - we�re out here purely for the love of the game, the same as you are. The only major difference is that you�ll be able to get paid for your skillset, should you win/place.

2.) You will not be playing a member of staff at a B-KIN tournament. EVER. That�s a pretty heinous conflict of interest in our eyes, and we will not participate as actual bracketed competitors in a tournament that we sponsor, as that would mean that there�s a chance we would win our own prize money if we did play in our tournaments - and frankly, we consider that practice a load of bullshit. However, in the (highly) unlikely event of a total no-show of players except for one competitor, the competitor will have their choice of a member of registered staff to play against for a chance at a 1st or 2nd place finish. If the competitor were to win, the full 1st place payout is awarded to them, in case of a loss, they keep the 2nd place payout and have their entry fee for the next tournament they attend waived.

3.) You are able to bring your own controllers to a B-KIN tournament. Want to use your own custom pad? That�s cool. Want to use a fightstick? That�s cool too. Want to bring a standard controller, just because you trust your own equipment? We�re down with that. Just make sure that it�s unmodified to take advantage of any kind of what-have-you in the game and we�re totally okay with it. In fact, we recommend that you bring your own controller. It's just better that way.

4.) Bracketing and referees will be provided by way of individual members of B-KIN staff. There's no performing two or more jobs at once by any staff member, so we maintain an attentive, professional foundation in which to hold events. The way we see it, you�re serious about having fun, so we�ll be just as serious as you are about keeping it that way. Most of all, we�re about keeping it fair at all times. Pauses are forgiven within the first five (5) seconds of play, but only once. After that, you'll forfeit your match for pausing mid-game.

5.) The prizes are a guaranteed payout. If you�re one of 4 people that show up (because in that case, folks just weren�t cool enough to come out en masse and play for cash), you�re still going to get your payout. We won�t cancel the prize or the tournament. It�s yours, provided you earn it, even if it�s just an automatic 1st vs 2nd place tournament.

UNOFFICIAL RULE #6.) Please, please do not ask when you will play next. We are trying to focus on maintaining the entire bracket, and this kind of constant interruption makes our job a lot harder. When you are called, you will play. Just stay close by, bring a laptop/PSP/DS/iPhone, and you'll never find yourself in a bad or bored situation.


Tatsunoko Vs. Capcom
- As the US version hasn't been fully explored/examined as of yet, any discovery of any game-breaking glitches or exploits will be duly noted here.

::EDIT::
As there are infinites in this game that have been found, they are allowed, as two Super Bar Stocks can be utilized to initiate Mega Crash, therefore forcibly breaking the loop. It will all boil down to skill.


Marvel Vs. Capcom 2
---On The Subject Of "Infinites"
MvC2 is famous (infamous, really) for containing infinite combo loops that can absolutely destroy an opponent's ability to fight back, and cause the entire match to become one-sided. These are character-specific, and not all characters have this ability, so rather than ban characters that are considered high-tier (as some have requested) we have decided to force the issue of fairness by instituting a five-one-thousand second-count rule on infinite combo strings. You can perform infinites freely, but can only maintain them for five seconds (referee-counted by scale of one-one-thousand, two-one-thousand...), after which you'll be allowed two seconds (counted the same way) to break and allow sufficient recovery distance. Afterwards, you may reinitiate the infinite string and gain as many consecutive five-second strings as you please, but do try not to abuse this. We are trying to keep this tournament fair from the standpoint of actually seeing a fight rather than a one-sided assbeating repeated by the same selection of six characters out of an over-fifty selection total. So, we're hoping this strikes a good middle-ground between more casual folks wanting to play with teams that aren't Sentinel/Magneto/Storm/Psylocke/etc. while still allowing those with a supreme level of skill and practice invested to show off their skillset accordingly.


That's the long and short of it. Entry fees are $5 for each individual tournament, or $10 for both. Prizes are $75 for First Place, $50 for Second Place, and $25 for Third Place, all prizes on VISA Gift Cards (that can be used as cash anywhere VISA is accepted) for ease of transport and less risk of anyone straight jacking you for a newly-acquired stack. It just seemed easier this way.

Taken from the official announcement @ www.bkin-ubf.com/forums, and posted on the Event Calendar @ Shoryuken.com. Full effect discussion/early registration/asinine shit-talk @ B-KIN's Forums. If you live in the area, do yourself a favor and support your local gaming scene - the best is yet to come, BELIEVE ME, so all of the fellow Central Florida dtoiders need to come out and represent!

It's like your mom used to scream at you when you were causing too much damn ruckus in the house:
GO PLAY OUTSIDE.
#Community    #GAMENARPS!
Login to vote this up!