2:28 PM on 02.10.2010 (server time)    0
Mass Effect has to have been one of the best games I ever played. The deep, emersive storyline, the grave decisions you had to make. Freedom to be anyone you wanted to be, to be a hero or a badass, or even someone in between. It was one of the greatest gaming experiences ever, and can only be truely understood by playing the game. When I finished the game, I was just in awe. I asked myself, how could anything be more epic then that? How can the second Mass Effect top that? Now having finished the second Mass Effect, now I know. The first Mass Effect was great, but I found the second one was still way better. The third one will win awards that don't even exist.

You start the game just right after the first, searching space in hopes to find out what has happened to ships recently dissapearing in the area. Thats when something very terrifing happens. The Normandy is attack and destroyed, and you die. Big suprise, yes, but this is just the begining. Two years later you find yourself awaking on a table in a Cerberus facility. After a series of events you find your new mission is a suicidle one and you need to assemble a epic team. To boot, you got a new Normandy, and its a lot more badass then the last one. You will get to see the faces of those of your past and even get to recruit a couple on your new team. Me, personally, was so happy to get Garrus as a part of my team rather early in the game. 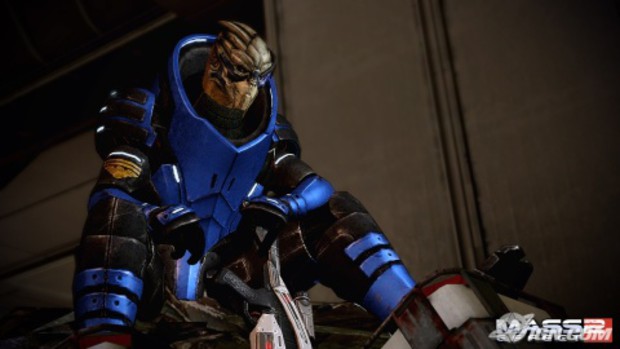 One of the greatest things about Mass Effect is the whole Paragon, Renegade system. In each conversation you have with others, you can choose how to respond. It'll lend to either your Paragon or Renegade status, or neither depending on how you want to go about playing it. If you reach certains hieghts in your Paragon or Renegade status, it'll open up other conversation options. You can have the chance to either charm or intimidate whoever you are talking to. You also get Paragon and Renegade buttons. It allows you to take interupting actions in the middle of an event. Sometimes you can be a badass, press the left trigger when the symbol comes up on screen, and increase your Renegade status. It works the same for Paragon. It doesn't come up often, but when it does its great.

Building relationships in this game is a big deal. If your team is not loyal, the mission will fail and your starting Mass Effect 3 without Shepard. However, if your team is fully mostly loyal, you can see Shepard again in a few years. Other then the loyalty, you can build more intimate relationships with other characters depending on if your female or male. Its not a life or death part of the game, but getting a chance at love with your crewmates is just a lot of fun. And having the Professor give you a speech on safe sexs with the sepcies of your choice, is hilarious.

The gameplay has made some changes from the past games... One I noticed the most is your guns need "ammo". Its a little more complicated then that, but when it comes down to it, its ammo. Instead of having to wait for your gun to cooldown if overheated, you put in an other heat clip and continue to shoot. I found myself short on ammo only a few times in the game, and this in not an improvement, its just a change. You also loose the ability to costumize each weapon, you just get what you get. However, you can use powers to make your gun use incendiary rounds or cryo rounds. It simlifies things compared to Mass Effect 1, and I didn't like it at first, but in the end its way better. You don't spend a great amount of time making someones weapon do this or that. There also isn't a large amount of weapons. Theres a few versions of each and you upgrade them by doing research and spending found minerals.

Your armor also works a lot differently this time round. Instead of buying full sets of armor, you by peices which each do something unique. They can increase your running speed, health, power, melee damage and so on. This allows you to have truely unique armor to your liking. You can also choose your armor color and paterns on it. I found it very cool that you can make your armor look the way you want.

Space exploration is an obvious part of the game, and is up to you if it really matters. Each planet you come across can be scanned for minerals, or other strange things that you might happen to come across. Scanning for minerals is a downside to the game. Its slow a tedious... You have a radar and you slowly pan over the planet looking for spikes in the radar, just hoping for anything. Its painfull and boring, and you'll need to do it if you want to upgrade the Normandy, or your crews weapons, and armor. Luckily later in the game you get an upgrade for the scanner, which makes it move faster... But this doesn't make it that much less painfull to do and doesn't come soon enough.

Visually, Mass Effect 2 is one of the best. The first Mass Effect looked great, and the second one has improvements. Lighting is better, explosions look awesome, and there is somewhat of a difference in character faces. There is no more loading time for textures and faces, which is great. The characters also run and walk more naturally then the previous Mass Effect. There is an error here and there, I found myself sitting inside someones desk suddenly while I was talking to them. Or I would lean on a nearby rail, but not really be leaning on it. I am aslo happy to see a large difference in enviroments compared to the first Mass Effect. There is no seeing the exact same base, or the exact same ship again anymore. Overall it looks better then the first, and looks very satisfying.

As in the previous Mass Effect, the voice work is the best I've ever heard. Its not cheesy, and personality and emotion in the characters comes of very noticeable and great. Some of my favorite voice work is the death cries. They are so awesome! Hearing someone scream as they burn to death is bone chilling, and very believeable. As in the pervious Mass Effect, the music is awesome. It always seems to suit the mood and gets pretty epic sounding on the final mission.

Mass Effect 1 and 2 have been a couple of my most favored and cherished gaming experiences ever. Theres not a single person, gamer or not, who shouldn't experience what is known as Mass Effect. You become so attached to the other charaters and Shepard. Its kinda sad to know that there will only ever be 3 Mass Effects. You want to be able to spend the rest of your life being able to play Shepard's adventures. I believe a review of this game, could never justify to others how awesome it is. I can suggest you play Mass Effect before you play Mass Effect 2. In my opnion, its a must. So go get Mass Effect if you haven't yet. I am really looking forward to 3, but for now... I'll prolly go play Mass Effect 2 again.
#Community    #reviews
Login to vote this up!