My Expertise: the support role.

Rhythm games could be considered my "expertise" in a way, since that's what I play most of the time and I'd consider myself above average at them. But even though my expert guitar skills on Rock Band aren't terrible, I can't really consider myself a true expert in the field when people like this exist:

So even though I'm "that guy" in my dorm, I'd hardly consider my rhythm game skills my expertise.

My second most played genre would have to be first person shooters. You've probably heard me bitch about Modern Warfare 2's many flaws in comments, but I really do enjoy the game when I'm playing with friends. I really only play the game with friends: random people online aren't much for communication and teamwork in team games, I rarely win Free For All (either due to my total lack of skill or being screwed over by those nuke boosting douchebags), and the most important thing is, I can't aim to save my life. I depend on explosives or knifing people most of the time.

However, a quick look at my favorite class, The Riot Shield, in Modern Warfare 2 made me realize what I am good at in video games. I'm the support guy. 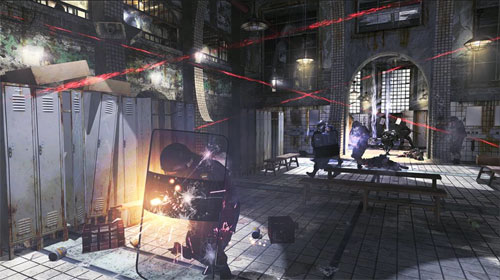 Your weapons cannot harm me!

Going back to the Rock Band example. Bass is easily my favorite instrument, not only is it undeniably the best, sexiest stringed instrument on Earth, it plays a vital role in getting high scores on Band Quickplay. While every other instrument can only get up to a 4x streak, bass goes up to 6x. I often find myself communicating with my fellow bandmates if they're playing a particularly difficult song (since the bass is rarely tough). Axe man struggling through the guitar solo on "Constant Motion"? I have some Overdrive saved up so you can flail through it. Vocalist getting their ass kicked by the outro of "Foreplay/Long Time"? I'm there to bail them out. Thank me later.

My favorite first person shooter right now is Team Fortress 2. When I first started, my normal problem was immediately prevalent: I can't aim to save my life? Sniper didn't work for me. I tried Spy, but I'm too spastic to do that convincingly. I've done somewhat decent with Pyro, but that's just because it doesn't involve too much aiming.

However, my favorite class is easily Medic. Being the support guy, I relished the opportunity to get on the front lines to help my friends push forward by keeping them alive. So I have 4 hours of Medic play on TF2, the second closest being Pyro with 2 hours. Medic is the only class I play on Team Fortress 2 nowadays, and I've gotten greater satisfaction healing people than running around trying to torch them to death.

Did you know that the same guy voiced the Medic and Travis Touchdown? I think I want his autograph.

The most recent game that's given me a chance to play a great support role is Modern Warfare 2, with the always-handy Riot Shield class. I noticed how the Riot Shield was quickly dismissed as a "noob class" since you couldn't shoot anyone, but I've found workarounds. I like to slap on Danger Close and Scavenger, lure people into narrow corridors with my Riot Shield, and destroy them with C4. I like rushing people with the Riot Shield as they waste their ammo, then throwing a knife into their face as they reload. So there's plenty of ways to attack with it.

However, I think the most important use is during team games. In Demolition, nothing is as satisfying as rushing a bomb site while drawing fire from the opposite team. My team mates pick off everyone else, I plant the bomb, we win. I'll go up on the front lines with a teammate behind me, as I draw fire and he picks everyone off. And even if I get a negative kill/death ratio, I'm gonna make damn sure that we win the game no matter what. The Riot Shield is crucial for planting bombs and capturing points, and I think people on my team appreciate it.

I mean, I only get racial/homophobic slurs yelled at me by the other team for beating them, as opposed to my team when I'm trying to just use a gun (and failing miserably). So, that's a plus, right?

So, even though I'm not the "lead singer" of the group when I play online, I like to think of myself like the bassist, providing a steady foundation and occasionally showing off with a sweet solo. For the most part, I'm the team player, the one who may not get the "spotlight" of having a ton of kills or the highest score. As the support guy, I'll do everything in my power to make sure that the team succeeds.
#Community    #OpinionEditorial
Login to vote this up!