I'll be playing Demon's Souls probably for the rest of my life. 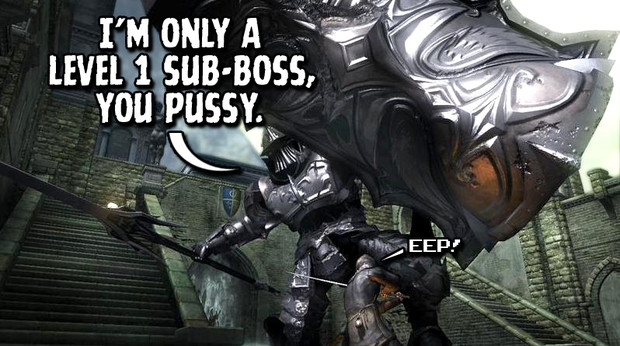 I've been playing Demon's Souls since it came out last year. And I'm still on Level 1.

I can't beat the Tower Knight yet. When I can get to him.

Granted, I do not get to play as often as I like, it takes me a notoriously long time to finish games due to other obligations (sometimes referred to as "life"). Hell, half the time I get distracted by another game altogether! (I'm talking to you, Dragon Age) But sometimes you get hooked into a game and it just lingers in the back of your mind, "Aw jeeze, I really should sit down and play some Demon's Souls... If I can only get past that next part..."

When I read initial reports of the game's difficulty, I thought, "Really? I'm no slouch, how hard can it be?" And my thoughts were that a game so difficult as noted could not possibly be fun. But like so many others, I found much enjoyment in tiptoeing my way through the introduction of Demon's Souls, and an immense-- almost profound-- sense of accomplishment for meeting milestones within the game. Hours of play seemingly honed my level traipsing to near perfection, and yet I would regularly die and curse at the top of my lungs. I would boil with rage after losing a healthy wallet of souls, only to die 30 seconds after re-animation and losing them for good. Grrrrr!

Did I mention I haven't finished level 1 yet? I'm not even halfway.

Look, man, the game is brutal. What amazes me most is that I have barely scratched the surface of what the Demon's Souls world has to offer. I really do enjoy playing it, but I fear it will take years for me to finish it. I mean, that game is like a job-- serious dedication is required! I keep thinking to myself why in the world would I even want to invest that amount of time into it? And I remember the sense of elation I felt when I beat that first Phalanx boss. I remember the awe and outright fear of trying to run the castle gauntlet when the dragon flew over and torched the path (that scared the shit out of me). Basically, it is a rare, rare game -- especially after my long gaming history-- that can still elicit those kinds of emotions.

The least I can do is beat the first level.
#Commentary    #Community
Login to vote this up!