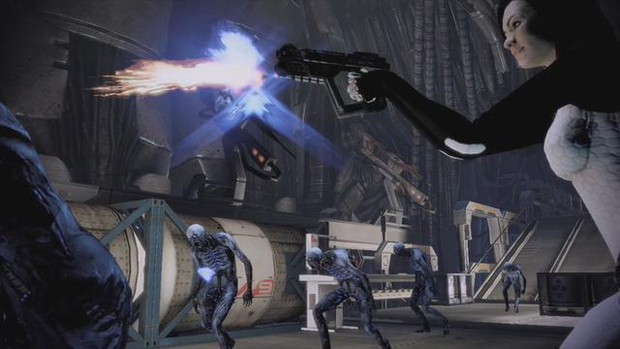 For the last week or so, I've disappeared thanks to sinking in hours of playtime with Mass Effect 2. Of course, none of you knew that because I accidentally hid the post where I mentioned getting the game. Go read it here. And yes, I am an idiot.

That being said, I'm neck deep in this game right now, busy guiding my Shepard through a Paragon playthrough and enjoying it immensely (Martin Sheen = awesome), but Mass Effect 2 has managed to do something no other game to this point has done:

It has made me fucking terrified of it.

Now, you might wonder, what is so scary? Well, There's a good amount to be frightened about if you are like me. And I will not mention spoilers, but to say the least, there's a number of ways you can screw this game up if you're trying to keep everyone alive for Mass Effect 3. And yes, that is my plan. And since saves will supposedly transfer over to ME3 from ME2 like they did this time, but with even greater emphasis on how that game plays ... I'm terrified of fucking things up and ending up having to play Mass Effect 3 the way I didn't want to play it. Or having to go through ME2 once again to secure a proper save file for ME3.

The first game did have consequences that transfer over into this version, of course: Kaidan's dead in my game, having sacrificed him for Ashley and Liara is still my love interest, though I'm doing a split-save where I'll have a Liara playthrough and a Tali playthrough now for Mass Effect 3. But possibly losing someone for the rest of the series because you made the wrong call, without any way to go back and easily fix it? That makes me a whole lot more cautious, and it's been making me take the game slower until the Internet can figure out the ideal way to make sure everyone lives at the end of the game. They're closing in on it, I think, but still not there yet.

I can't recall a game that's made me act so cautiously before. I feel like BioWare and I are playing three-dimensional chess, and if I make the wrong move at the wrong time, it's checkmate and I lose. It's a bit nerve-racking, to be honest.

BioWare promised that Mass Effect 2 would be better and have a bigger impact. It's certainly better in almost all the major categories, and as far as impact goes? Well, that goes a bit beyond the game and into my mind.
#Community
Login to vote this up!