The Future: My Very Own Supercomputer

9:30 PM on 01.30.2010 (server time)    0
[Disclaimer: This blog does not represent the views or opinions of Enkido as he exists in a sane state and he cannot be held responsible for the content expressed in this article. The charges were dropped and he has been absolved by the highest court in the United States of America. Also, cocks.]

To begin, I live at University in an apartment with four other people. Three university recognized roommates and one mutual friend that lives in the closet under the stairs in. Yes he lives in the closet under the stairs, but that is not the point. What is the point is that we have a total of five avid gamers living in the same apartment. As such I have access to all three of this generations hardware offerings. Now with this many people there is bound to be some overlap when hardware is concerned and indeed that is the case as we have one 360, two Wii's, and 2 PS3's. That's a lot of gaming.

Normally, this would be more than enough to placate a group of gamers such as ourselves, seeing as they all hook up nicely to the 46 in Bravia occupying our common room, and I had reasonably believed this to be the case. Imagine my surprise when one of them, not two nights ago, returned home with a brand new 120GB PS3 Slim system. Indeed, we now have three Sony Play Station 3 systems within the same living space. It is rare to see even two of these machines occupying the same room outside of some kind of sponsored gaming event or trade show, let alone the living space of several cash strapped college students. Yet, I had just been informed that we would be playing host to three of these devices. Not only that, I was further astounded to find that my fourth roommate had just been offered a system by a friend of his with, apparently, unnecessarily large amounts of disposable income, and a fourth system would be gracing our humble abode. 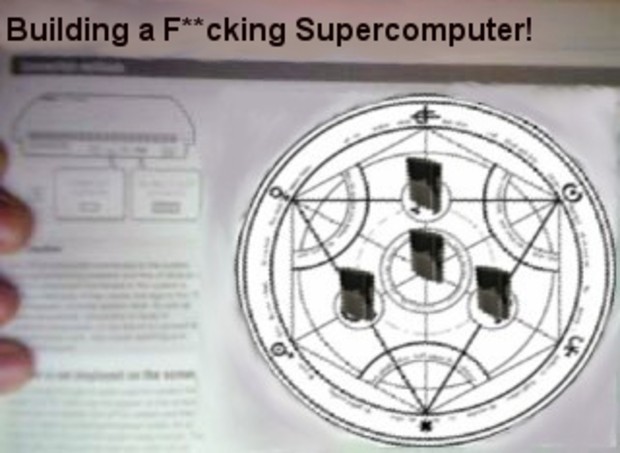 Excellent. Now, the instructions also mention something about the array being powered by the heart of an orphan child and a special start up process that requires several chanting monks in a dimly lit room arranged in a specific pattern, but those seem easy enough to get a hold of considering we managed to assemble four PS3's. Now, to conclude, in the not to distant future I will have access to an unprecedented amount of computing power. The question is what to do with it. These are some of the ideas I have come up with in no particular order.

Make my Wii incredibly jealous
Make it play Mass Effect 2
Order a lobster milkshake
Find out what I did wrong to not have any friends on my blog (those fingerprints could be any ones, it's just coincidence that they're mine, and it doesn't prove anything)
Create a way to punch people over the internet

I must say that it wont all be fun and games however. Some of this power will go to science.

I think I have a pretty good start, but if you guys would like to add any ideas I am more than open to suggestions.
#Community    #OpinionEditorial
Login to vote this up!