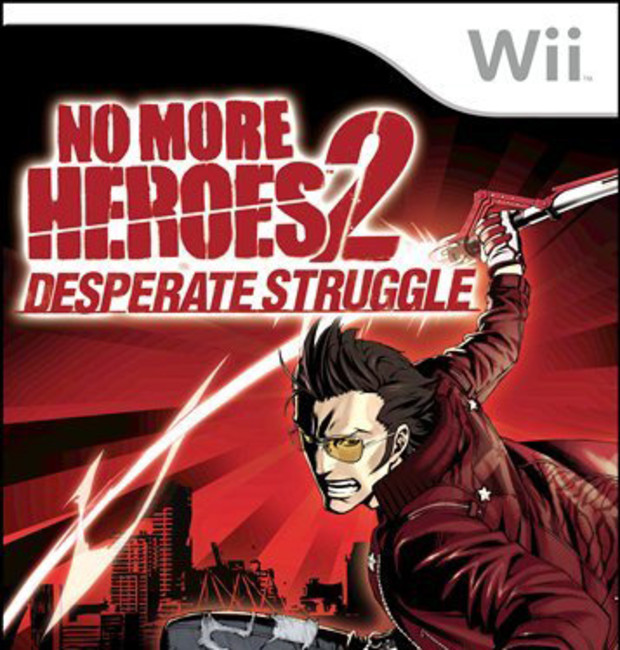 Travis Touchdown is back the sequel to 2008�s Kill Bill with wanking off lightsabers game, No More Heroes, with No More Heroes 2: Desperate Struggle. The sequel fixes some of the issues I had with the first game, but includes some new gameplay elements that end up hurting it more than helping it.

Travis is out for blood after he learns that his best friend was assassinated and is somehow convinced to compete in another assassination tournament at the request of the French seductress, Silvia. Despite being the winner of the last tournament, he starts at rank 51. However, you�ll actually only have to fight in 15 battles as you�ll jump ahead in ranks due to consolidated battles and other events that happen in the story.

The level design is identical to the first game, and in fact, some of the locations from the previous game return. Essentially, you�ll move from room to room killing enemies with your beam katana, which is just a fancy way of saying lightsaber. Pressing the A button swings the katana, while the trigger lets you kick enemies. When an enemy�s health has depleted, an arrow will appear and you�ll have to swing the remote in the indicated direction to finish off an enemy. If you finish off an enemy with a kick, two arrows will appear and you�ll have to swing the remote and the nunchuck in the direction that the arrows are pointing to perform a wrestling move. About half of the time, these motion controls work in the way you want them. As you defeat enemies, slot machine reels will appear and if you match up three of the same picture, you�ll earn a temporary power-up like faster attack speed, shooting blasts of energy with your sword or turning into a tiger and going ape-shit� or rather tiger-shit. Boss battles are typically longer than normal battles in the sense that you�ll have to figure out the boss�s strategy and exploit their weakness, then proceed to wail on them. It�s basically more of the same from the first game.

Between matches, you can take on side-jobs to earn some extra money. No More Heroes 2 improves upon several things in this regard. First, you don�t have to do any of these jobs at all. Before, you had to repeat the same tasks to earn enough money so that you could pay for your admission into the next battle, but now you don�t. Second, the GTA-style travel around the city has been removed in favor of a map screen where you simply select your destination and you�re there. Finally, with the exception of the scorpion job, all of the side-jobs are 8-bit NES-style mini-games. These classic games vary from action-puzzlers, side-scrollers, to simple puzzle games. Your speed and thoroughness determine how much money you earn from each job.

The money you earn can be spent on new beam katanas, clothing for Travis, or gym exercises to increase Travis� attack power and health. It�s entirely optional and aside from the clothing, can benefit you later. The new beam katanas you can earn include: a green curved blade, a long-reach red blade and my personal favorite, two red blades. The clothing you buy is just customizable stuff that I never really cared about.

Now for the bad things that are included in this game. About halfway through the story, Travis will encounter Shinobu, a young female samurai who he fought against in the previous game, but spared her life. Now she acts as Travis� pupil and tackles a couple of missions for him. Now I�m all for including new characters, but Shinobu�s levels are horrible. There are platforming sections in her levels and the combination of a wonky camera and the fact that she jumps like a stone don�t help. I had to retry multiple jump attempts simply because I couldn�t see where I was jumping nor could she hurdle across small gaps without falling. Also her movement is very stiff and doesn�t feel right at all. Travis� brother, Henry, is also a playable character for a single battle and features the same stiff controls as Shinobu. All in all, the new character additions are nice, but I could�ve done without the platforming.

Graphically, the game maintains the previous entry�s cel-shaded artstyle, where everyone and everything resembles Japanese animation. I haven�t played the previous game in two years, but I noticed a lot more �booby-physics� in this iteration. Gratuitous violence and spraying blood make a return as well. If you were into the artstyle of the last game, expect more of the same in this title.

Much like the visuals, the sound retains many of the elements from the last game. All of the original voice actors are back and bring the game�s mature, perverted humor to life. The catchy battle theme from the last game makes a reappearance and in multiple forms, including a version with sung Japanese lyrics. Lightsaber hums, death screams and profanity are also back in full force. The 8-bit mini-games also include retro music and sound effects from yesteryear.

Overall, I found No More Heroes 2 to be better than the original game, but it still has some issues with its camera. The new characters were nice, but Shinobu ended up being more of a burden than a blessing. If you loved the first game, definitely check this one out.