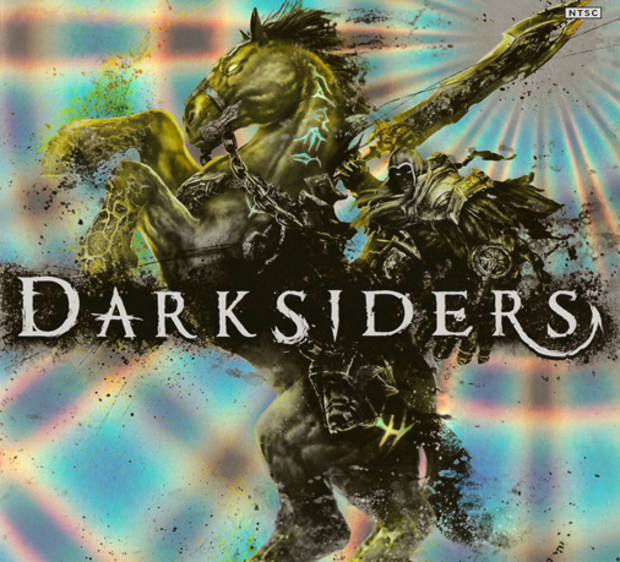 The Legend of Zelda: Twilight Princess was the last Zelda/Zelda-esque game I�ve played on a console. The new Zelda game for the Wii has been floating around in the rumor mill for some time now, but until anything concrete is announced, Darksiders from Vigil Games will suffice.

Going with what other critics have said, Darksiders blatantly copies off of many games. The overworld exploration and dungeon crawling from The Legend of Zelda are the primary aspects of this game, while the combat is similar to God of War. There�s a portal gun from Portal, a flying-shooting sequence from Panzer Dragoon, the grappling hook/swinging mechanic from Bionic Commando, the power-up-based exploration from Metroid and the main character totally looks like Arthas from WarCraft. Oh, and that memory of you playing with penguins at the zoo, Darksiders took that too!

Getting that out of the way, the story of Darksiders is loosely based off of the apocalypse stories that are mentioned in the book of Revelation from the Bible. Something terrible has happened and now heaven and hell are fighting over the world. You play as War, one of the four horsemen who are summoned during this time, but apparently you didn�t get the memo about the summoning being called off and now you�re stuck on Earth looking like a dumbass.

War is defeated by a minion of The Destroyer and sent to the Charred Council who charge War for bringing about the destruction of the world. However, War is given the chance to prove his innocence and unravel the mystery as to why these events are taking place. War is released and stripped of everything but his big-ass sword, Chaoseater. and the Council have attached the Watcher to War�s arm to keep tabs on him. The Watcher is the �Navi� companion of War and is voiced by Mark Hamill.

War�s quest will take him through four dungeons that resemble the dungeon structures from the Zelda games, namely the fire and water temples. You�ll solve puzzles, battle enemies and collect treasure. In each dungeon you�ll come across a map, a compass-like item and keys for opening locked doors. Probably the most noticeable thing is whenever you solve a puzzle, the camera will zoom out and pan over to a locked door and you�d expect to hear the little Zelda jingle, but instead you get Darksiders� version of the jingle with a �BUM BUM BUM!� You�ll also find a major item/weapon that is needed to solve some of the puzzles in a dungeon and ultimately defeat the boss of the respective dungeon. For example, the first of these items is a shuriken that is used much like Link�s boomerang; you can target multiple targets in a specific order. An example of a shuriken/boomerang would be using the fire from a torch to light a bomb plant. Yes, bomb plants are in this game.

War�s tools are also used throughout the game�s overworld. Large blocks of ice can be broken with War�s power glove weapon, while hovering grapple points can be attached to War�s hookshot that is simply called the Abyssal Chain. And as you may expect, there are treasures hidden throughout the world and many of them are blatant copies of things you�d find in Zelda. For example, after defeating a boss you�ll acquire a lifestone, (a skull) and is basically a heart container. This gives War an additional bar of health. Throughout the world you�ll also find lifestone shards and if you collect four, you�ll create a new lifestone and receive more health, much like the pieces of heart. Additionally, you�ll find wrath shards that can be combined to give you more wrath, which is needed to perform magic spells.

War�s magic includes: Blade Geyser, a ring of blades encircle Wars. Stoneskin increases War�s defense, Immolation ignites enemies and Affliction afflicts curses upon enemies. Wrath is represented as yellow, while health is green. Finally there are blue souls you�ll collect for defeating enemies, destroying objects and opening blue soul chests. Souls act as the game�s currency and can be used to purchase new weapons, combos and magic spells. Spells and combos can be upgraded multiple times with the purchase of souls, while your weapons level up with extended use.

As mentioned earlier, combat is similar to God of War. You�ll mash the X button constantly and occasionally press the Y button for your secondary weapon. Your secondary weapons include the aforementioned power glove, which sends shockwaves through the ground. You also have long-reaching scythe, which I only purchased on the recommendation of my buddy Adam. Overall, I found no practical use for the secondary weapons since I was more than satisfied with the Chaoseater.

Your weapons can be enhanced with various attachments that generate different effects such as increasing a weapon�s attack power, generating more souls, or slowly replenishing your wrath. The wrath regeneration enhancement essentially nullified the purpose of the yellow chests for the rest of the game.

In addition to weapon combat, pretty much all enemies can be finished off with a gruesome attack that prompts players to press the B button. Smaller enemies can be defeated with this attack alone, but the stronger ones will have to be stunned before they can be finished off. These finishers vary from breaking an enemy over War�s back to slicing them in half with his sword.

The visuals for Darksiders are very good. The opening cutscene is all pre-rendered and fools you into thinking that�s how all of the visuals look. The environments for the first few areas are dark and gritty, but later you�ll venture to a bright and colorful mountain pass and a beautiful temple garden. The game�s areas are definitely things you�d see in The Legend of Zelda only darker in tone. Character models are all really good, if you don�t mind War having a WarCraft appearance with his bulky armor and large shoulder pads. The designs for the angels look amazing, while the demons are what you can expect from demons.

I don�t recall much from the game�s soundtrack as there isn�t any main overworld theme. The voice cast is amazing, however. All of the characters sound really badass and it sounds like these characters are really from the apocalypse. Mark Hamill�s voice as The Watcher definitely steals the show with his wily Joker voice from Batman: Arkham Asylum and the animated series.

While nothing from Darksiders could be considered original, it�s all executed admirably. The main quest will take 10-15 hours to complete and grabbing all of the collectibles will add some more hours to your playtime. If you love The Legend of Zelda series and can�t wait for the new Zelda game, I highly recommend checking this game out.