The Future: Over Saturation 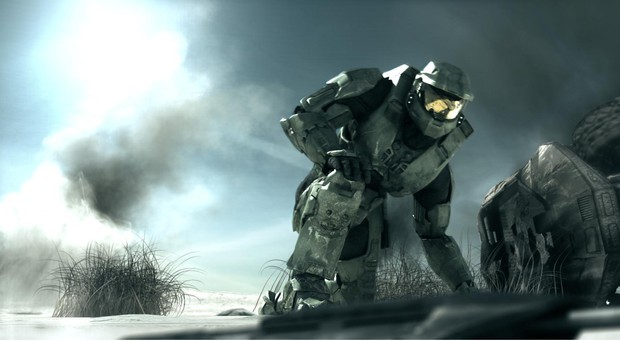 If I didn't know any better I would say that diversity in games is lost on us. Not to the point where we're all playing Pong like it was in the olden days, but still it's pretty bad. How bad? The next time you're in a game store sidle over to the Xbox 360 section and don't forget to bring your preferred booze of choice, since I plan on getting you arrested.

Take a single drink if you:
-See a first person shooter.
-See a space marine.
-See an assault rifle.
-See what can be classified as a "soldier".

Keep in mind that these drinks stack, so if you see Halo 3 ODST you must drink four times before moving on to the next game. God help you if they have Halo Wars.

Now just see how far into the section you can get before you either pass out or vomit. Yeah it's bad. I mean, I love first person shooters. I've been shooting people with a gun held in the hand attached to my chin since the N64 era. Sure I was a little late to the gun firing manliness that is the FPS genre, but I was still there before Halo, so give me a little credit.

Not to sound like I'm ripping on Halo either. Halo is a serviceable FPS game that gets way more credit than it really deserves. The only reasons I really dislike Halo is because it was the game series that popularized a bunch of genre standards that I loathe. You can only hold two guns, and you have regenerating health. I hate these two things, and more and more shooters use them. It's already passed the point where it's spilling into other genres as well. It just frustrates the hell out of me.

At this point you can classify most first person shooters in one of two ways. It's either a Halo, or it's a Call of Duty. See the games Section 8, and Operation: Flashpoint for an exact definition of what I mean. If it's a third person shooter, it's going to get compared to Gears of War whether or not it has 'roid monsters with chainsaws.

I'm not saying they're bad games, I just wish the developers would at least try something different. I know it's because they sell. It burns me inside like the mine fire beneath Centralia, Pennsylvania to think about it. People will continue to buy the games if they're like the games that they bought the week before hand.

I think games are now, what movies were during the 80's. Does that analogy make sense? It does to me.

This isn't even a rant about FPSeseses. It's about not being able to tell two games apart because they're all starting to look the same. Here's another example of what I'm referring to.

Dante's Inferno is to God of War, what Bayonetta is to Devil May Cry.

A few teency weency little differences here and there, but you still play the games generally the same. The only game that's popular right now that's being considered a clone and I don't feel deserves the bile I spew at these others is Darksiders. They say it's a Zelda knock-off, but I just don't see it.

The really funny thing is, of the aforementioned new games the only one I played (or demo'd) and didn't get into was Darksiders! See?! I'm a sheep too!

I'm a little glad that Street Fighter IV's success didn't cause a boom of bad fighting games last year. We got it, BlazBlue, and King of Fighters XII, and we were done. Are fighters too niche to warrant this kind of behavior? Yes and no. We all know fighting games run on the vicious cycle of we made good game. Let's add two new characters, "re-balance" everything and re-release the game. Maybe drop the price a bit, or not. Who cares? Those guys will buy anything we put out.

I'm guilty of this one too. I personally own every single iteration of the Guilty Gear fighting series released in the US. All I need is GGXXSlash and I'll have them all. Add in GG2: Overture and I'll have the whole console series and then I'll be looking for a Wonderswan. I defend myself by saying I'm a collector. It doesn't change the fact that my wife bought me a copy of the original Guilty Gear on PS1 from Ebay and I've played it twice. She bought it for me two years ago!

Don't get me started on Japanese strategy RPGs...

Meanwhile, with all these repeats being released and selling a bunch of other genres suffer. When was the last time you played a good new platformer that didn't have the word "Mario" in the title? The last one I played was called Mushroom Men, and I beat it in two sittings. I long for the days of Banjo Kazooie, a game I spent a lot of money on because the only way I had access to it was via rental. The money I spent renting that game could have been used to buy it, and two or three others. All that time spent and I still never beat it! I would wonder if I just sucked at games at that age, or if it had more to do with the unending desire to collect everything.

I sit here and try to think of new platformers that have come out in the past year and the only ones I can think of are ones based on bad CG kids movies. Oh wait I forgot about Ratchet and Clank. I'm pretty sure they're the only ones competing with Mario in that department, and their game is part shooter.

I'm thinking the future needs to see developers spread their time and money out a little better. I want to tell the next developer who announces the next third person shooter with a cover mechanic, and no life bar to not do it. To take the idea they have for the game and make it hack and slash dungeon crawler, or something more similar to Contra, or maybe an intense action platforming puzzler...

I wonder how neat it would be to see the staple space marines in space fighting space aliens formula would work outside the FPS, TPS, RTS genres. Oh wait! They made Mass Effect already! I think that click-and-say western-style RPGs will be the next genre to get dominated by bad games from companies desperate to make money.

It doesn't matter, they won't listen to me. They'll add a minor mechanic and call it the next big thing. It'll still be Gears of War.

In a combination of ways many people have put it: "Tug on the root of all evil to make the world go 'round." But still, we can always hope.

PS: If I didn't feel I already said more than enough to emphasize my point than I would have also mentioned sequels, and World of Warcraft.
#Community    #OpinionEditorial
Login to vote this up!