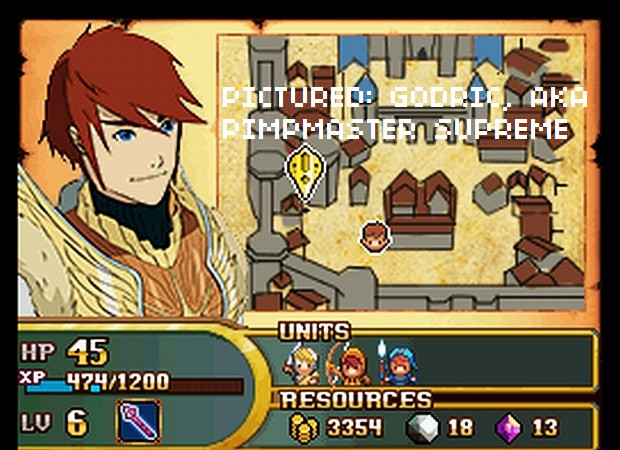 So, an RPG, a turn-based strategy, and a puzzle game walk into a bar. There they meet some spiffy, yet slightly generic manga-lookin' characters. Everybody has a grand old boozy good time, they go home together, and the result of a night's worth of debauchery is this game. Now, it could have turned into a royal mess, but by some stroke of luck (or more likely, due to Capybara Games's development prowess), Might & Magic: Clash of Heroes got all of the best traits from each of its parents.

Seriously, if you own a DS and like puzzle games and/or turn-based strategy and/or RPGs, then you want to go and buy this game right now. But I suppose I should elaborate.

Hamza's preview of the game, while informative, doesn't really do it justice. (Plus, that's from six months ago, and there hasn't been any mention of it on Destructoid since.) While everything he mentions is true, he was not able to spend enough time with the game to really understand its intricacies. What initially appears to be a simple match-three puzzler very quickly becomes an extremely satisfying battle of wits.

The overworld exploration is kept to a minimum, with the player traveling between nodes, a bit akin to the travel in fellow puzzle-RPG Puzzle Quest. Hamza dumps on this in the preview, but it feels perfect for the game because despite how our hairy friend feels, this game is not about exploration, it is about battles.

The battles occur with the player's army on the bottom screen and the opposing force on the top screen. Each army has "Core" units that take up a 1x1 square, "Elite" units that require a 1x2 area on the battlefield, and "Champion" units that fill up a huge 2x2 portion of the screen. Most of the battle involves matching up three Core units in either a column for attacking, or a row for defense. The actual unit movement occurs in a Critter Crunch-esque manner of moving the bottom-most unit in a column to the bottom of any other column. And of course, pulling off moves that create several rows or columns at once reward the player--in M&M:CoH, the reward is more moves per turn to set up attacks.

The different types of units introduce an interesting dynamic, in that Elite and Champion units do more damage than Core units, but they take more time to charge their attacks and are more difficult to maneuver due to their size. I personally found myself avoiding the Champion units in favor of Elite units because although a fully charged Champion unit typically spelled defeat for the enemy once launched, the five or six turns required to charge was frequently enough time to win without them anyway, so at that point, they were just taking up space on the battlefield.

All in all, the battles in Clash of Heroes are superbly satisfying. Combining more advanced techniques like linking attacks (launching two or more of the same color units at once) or fusing units (stacking identical attacks to double power while retaining the shortest countdown) can sometimes lead to a blitzkrieg assault that feels like a symphony of destruction. There were times when I couldn't help but show my friends. "Look at this work of art I just created," I'd say, just before I was about to completely obliterate the CPU with an expertly planned offensive. Sadly, without much experience with they game, they could not truly appreciate it.

With a DS collection pushing 60 titles at this point (legit boxed cartridges, not R4), I consider myself somewhat of an authority on the platform. And it is without hyperbole that I can say that Might & Magic: Clash of Heroes is one of the best--if not the best--DS game I played in 2009. I bought it on the same day as Legend of Zelda: Spirit Tracks, and despite the typical quality we have all come to expect from the Zelda pedigree, I have already put at least four times as many hours into Clash of Heroes than Spirit Tracks. You owe it to yourself to try this game out.
#Community    #DS
Login to vote this up!