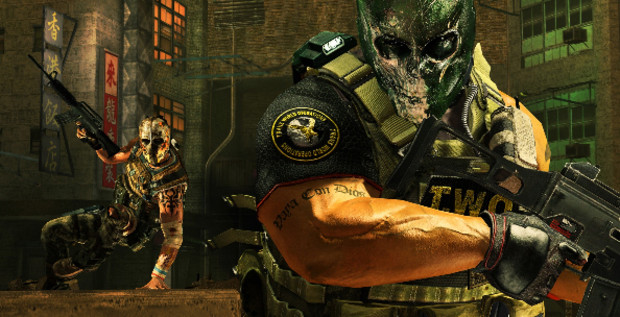 When it comes to online gaming, shooters in particular, I have a specific way I like to do things.

In a free for all death match scenario I like to have the one-shottiest gun, and the the quickest character. This has been true since Goldeneye since my friend always believe Boris, the guy I always picked, ran faster than anyone else. In Unreal Tournament 3, I like to find the Bio-rifle, or failing that a Flak Cannon, and proceed to run in circles until I bump into someone where I will try to kill them in one hit. Any death match type game you can count on me to use these tactics. For example in the often unspoken of XBLA game Cellfactor: The Psychokinetic Wars I liked to play as the kick ass robot guys called The Guardians. I liked the Guardians because their special powers are RUN FAST, HOLD TWO GUNS. Which I think is awesome. They suit my need to run, and also gun perfectly.

Then there are the online teamwork games. My play style changes on this because I like to be able to do my own thing, and the old run+gun technique doesn't work so well when you have an semi-organized group of idiots shooting at you. Really the only game I play of this type is Team Fortress 2. In TF2 I enjoy the spy class. He's self sufficient and he makes me feel like a bad ass when I'm playing against a group of morons. He also makes up for my inability to aim well since his primary means of slaying an enemy is to sneak behind them and stab them in the ass. Then once your target is killed you can either try to kill the next guy, or run and hide. I'm really good at this.

I may have to do a whole blog on TF2, but I need to get to my point.

Then there are the co-op online shooters. Fun stuff. Except when you have a completely different play style than the folks you're playing with. I recently got to play the new Army of Two game. I had skipped the first one since I heard it was on the short side, and you really needed a buddy to get the full experience. That and I'm fairly certain I was in the depths of MMO addiction at that time.

For the uneducated Army of Two is about a pair of mercenaries who get payed to shoot guys and high five afterward. Not complicated in the least. Going into it I thought I might get some laughs from the rampant ass patting, and fist bumping that would be going on shoot some stuff and be done. I actually liked it a lot more than I expected.

If I hadn't been playing with my friend I probably would have hated the game, or at least thought it was meh. Instead I got online with my IRL buddy to some high-fiving, guy shooting fun. While I'm uncertain about this, and I'll need to ask him to be sure, I think he and I cop to the same mindset of think before you act. Every time we'd come to a new area where the game would take over and show you where all the enemies are located we'd start to set out a game plan.

Me: I'll stay up on the balcony and snipe a couple of them to get their attention.

I'd pop up shoot a couple of guys to draw their fire, while he got on the ground to shotgun the rest of them. Afterward chest bumping, and man hugging would ensue.

In the situations in the game where you needed to rescue civilians we'd always work it out and even if things went wrong the first time we'd retry and use different tactics. This is what I enjoy about co-op online shooters. If I had been playing Army of Two alone, I would have been bored, and probably frustrated since we died a lot when we messed up or something caught us off guard.

The same thing pretty much goes for Left 4 Dead. You can add the fact that during the A to B parts I like to check every nook and cranny of the level for extra health packs, or pills or whatever. When it comes to the siege/cascade moments I liked to set up explosives in certain places where I can rely on them to be, in case I'm being chased by a tank for example. I like to be meticulous and try to plan the camping strategy with my team mates as best as I can. Obviously there will be times when you have to improvise, but that's why it's called improvisation.

Suffice it to say I get really, really ragequit pissed when someone fucks around and doesn't listen to me. I know I probably think about the set up to much, and that most of the time if you stay generally in one area with your fellow survivors you can stick out any event. So I guess I get super pissed because my plan didn't work? I don't know.
#Community
Login to vote this up!