The Future: A maybe-selfish desire for the postmodern in games.

Right now, I'm starting this write-up instead of doing my university homework. But don't worry, that's 75% done and I need a break from the hours I just committed to it.

Secondly, this is less about the industry and more about me and my desire for the future. But coincidentally, it seems like the industry's appropriating a market that almost satisfies my desires!

Maybe I can sort of just niche into that!

Postmodernism is a lot of things (and the linked Wikipedia page sells it a bit short, but it'll suffice). It may not even have anything formally to do with videogames! But there are some things I dig about the creative side of the postmodernist movement that I think the games industry can benefit from: fragmentation, intertextuality, and thematic re-appropriation. There's even reasonably justifiable ways in which that these creative aspects of postmodernism already exist in game design.

Here's a pretty well-known and simple example of intertextuality we saw in a game in 2009:


If you got the reference (and may your horrid deprivation soon be reversed if you're on Dtoid and don't catch the reference), then you've just experienced intertextuality.

Intertextuality is when a new work makes direct reference to another. This can be used in a merely celebratory fashion (such as Uncle Mario's exact quoting of Nintendo's Mario), but sometimes it works a lot deeper than that and the producer of a newer work fleshes out the reference completely into the newer work. Imagine in a theoretically deeper case that Ezio's Uncle Mario is a plumber by day (did they have plumbers in Renaissance Italy?), Assassin by night and who's trademark Assassin move is killing his enemies by jumping on top of their heads (and probably snapping their necks by doing so). That would be some intense intertextuality and what I note earlier as thematic re-appropriation.

Now, thematic re-appropriation is a postmodern feature that runs into one large ethical obstacle, and that is the question of whether or not something is plainly ripping something else off. In some cases, most critics or consumers of newer products that sport thematic re-appropriation do feel like blatant rip-offs, but sometimes it's done in a very classy way. The best example I can offer doesn't come from videogames, but rather comes from literature: Mrs. Dalloway by Virginia Woolf and The Hours by Michael Cunningham.

Mrs. Dalloway is usually held as one of the leading postmodern novels. Its told through a mix of the characters' consciousnesses and a lack of specified positioning in space and time. It's a terribly confusing novel to handle at first, because it rarely ever details when or where the characters are, since it literally occurs within the characters' minds: their memories are tied to their current experiences, so suddenly the reader might be reading about one of the characters' memories of a past event without the novel ever signaling that it has switched to a past event (this is that fragmentation feature of postmodernism that I mentioned, that lack of comprehension of time and space, but more on that in a bit). I mean, think about how you negotiate your experiences, especially with videogames. When you played The Legend of Zelda: Twilight Princess, you probably evoked some memories of Ocarina of Time. The novel attempts to emulate that mind's eye melding of past and present in its style -- certain events trigger the characters' memories of past events without warning. The Hours by Michael Cunningham re-appropriates themes from Mrs. Dalloway, but it is far from being a rip off. One of the characters in the novel is Virginia Woolf herself, as she is writing the novel Mrs. Dalloway; several of the characters are named after Mrs. Dalloway characters and sort of parallel the characters that they're named after; and the very novel Mrs. Dalloway itself is an integral part of the plot of The Hours, yet if you've read the two, they attempt to carry very different meanings despite their strong thematic similarities. The Hours is not a simply a retelling of Mrs. Dalloway, but a complete re-appropriation of its elements.

CAN GAMES DO THAT??? WHY YES THEY ALREADY HAVE!!! 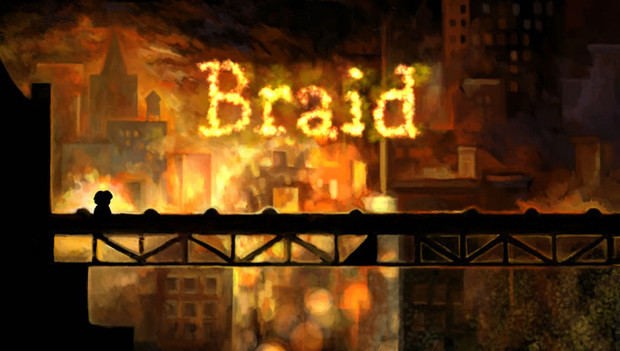 To date, Braid is the highest-quality postmodern game I've played. I'm sure there are plenty I haven't played yet, and even more to come... In The Future.

Jonathan Blow's Braid, which I'm sure many of you have heard of and even played, is postmodernism in gaming in its finest craft to date. (Well, at least to my knowledge -- maybe you all can enlighten me to other games? I'm kind of a fan of postmodernism as a creative movement, though as a philosophical one I'm not so convinced yet. Anyway, I want plugs for games that are comparably postmodern in design! Er, anyway...) Ahem!

The intertextuality is again, Super Mario Bros. The well-known, "I'm sorry, but the Princess is in another castle..." quote occurs at the end of the first world (oh, right, spoilers, heh). The basic gameplay mechanics are run, jump, and defeat enemies by jumping on their heads. The basic enemies look like Goombas. Again, this sort of operates as its thematic re-appropriation as well.

The fragmentation occurs in the story and takes tangible form in the gameplay itself as well. First, the narrative is presented from an unknown point of view at the beginning of each stage. We also don't initially have a sense of the order of these narrative events (first we hear about Tim's break-up with "The Princess," only to be treated to a brief story about Tim's socially-rough college days, which we assume came before the break-up).

And this is where Braid does it on a level that only games can achieve: time and space is manipulable, and therefore it is fragmented. And with each new world, the time and space manipulation changes up: certain items and environmental objects become immune to manipulation; the world's entire motion is dictated by the motions of Tim, etc, etc... Fragmentation in this case becomes an actual part of the gameplay itself. I nerdgasm every time I consider it!

And then it all comes together and actually makes sense. That is, if you can prove yourself a worthy navigator of effed-up space-time! The true ending is unlocked only after the full completion of every world. I won't spoil it.

We live in a postmodern age, though you don't really catch that term being tossed around a whole lot. And when I say that we live in the postmodern age, it certainly doesn't mean that everything is postmodern.

Games have actually been dabbling with postmodern techniques for a while now. The aforementioned Assassin's Creed II plays out as sort of a postmodern attempt at re-explaining the very existence of human beings! It plays around with history to tell its own narrative about humanity. I mean, I feel like it can be pretty sloppy sometimes, but I do applaud Ubisoft's effort with it.

Borderlands makes a bunch of intertextual nods to other games, and is pretty much a re-appropriate amalgamation of gameplay concepts from a number of genres. Bayonetta is littered with blatant intertextuality to Hideki Kamiya's past projects and re-appropriates Devil May Cry's gameplay into a fresh package. Half-Minute Hero, as a satire, is a pretty obvious case of postmodernist gaming.

Silent Hill: Shattered Memories is a postmodernist rearrangement of the Silent Hill formula, taking familiar characters and throwing them into familiar situations but rearranging all of the underlying reasoning for the Silent Hill universe. In fact, it's the game that spurred my thoughts on postmodernism (how many times have I said that word so far? Are you sick of it? I kind of am) in relation to games, because a friend and I had recently played through it in one sitting much to our amusement at the ending's twist on the Silent Hill narrative and much-touted psychological dimension established by Silent Hill 2. To my understanding, it's quite a divisive title in the series for long-time fans -- makes it kind of interesting to think about.

And I'm sure there are plenty of other cases you could come up with easily.

In fact, it might be plausible to point to the rise of postmodernism as the result of appeal of satire and irony. It's sort of believed that literature kick-started the postmodernist movement, and that it gained its steam not only through lauded novels such as Mrs. Dalloway, but actually through comic books and graphic novels. That's honestly a discussion for another day, but perhaps that's something additional for you all to muse about.

Anyway, I feel that as developers are currently seeking to explore the realm of narrative possibilities, they're often exploring (perhaps without even knowing that its postmodern) postmodern narratives in their games. I mean, I just was able to list off like 4 or 5 examples in the past 6 months alone, though the range of taste in that slew of titles is bound to vary based on the players. I do, even if out of my own selfish preference for postmodern creativity, hope that the future of the games industry has a lot more well-done postmodern design features.

Take the old, mix it up, and make something new.
#Community    #OpinionEditorial
Login to vote this up!