B-KIN Round Two is a WRAP! 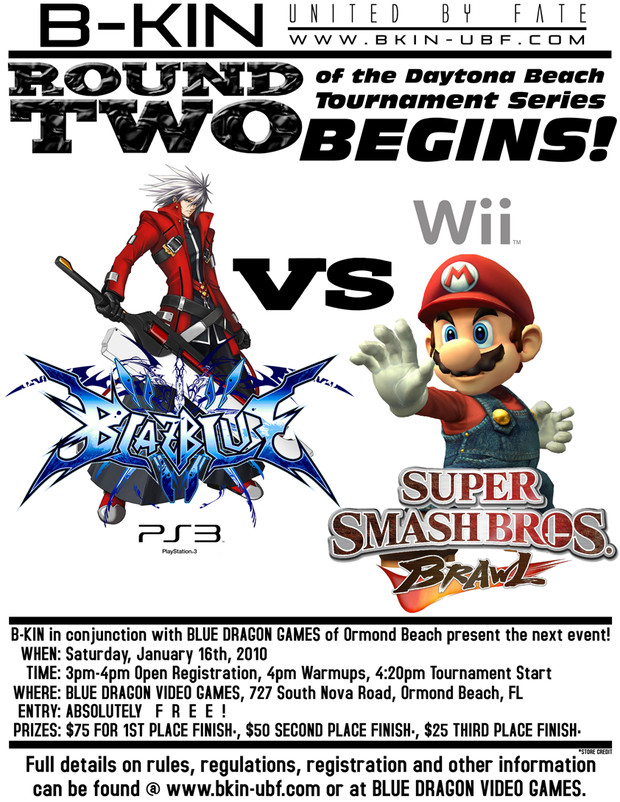 Being based out of Daytona Beach, Florida, we don't expect any game-changing amount of turnout for our tournament offerings. We're not exactly known for high-level, high-attendance videogame events.

But we went a long way in changing that last Saturday.

You see, we're big fans of the "conservative estimate." Let's say, ten for BlazBlue, twenty for Smash. Thirty competitors overall. That's considered a success around these parts, when on the topic of a young-gun company set up just to hold tournaments so people can play games and win prizes for doing so with a higher degree of skill than the other guy(s)/girl(s).

So, imagine our shock at seeing twenty people show up for BlazBlue and sixty-three showing up for Smash. It was a great day, by all accounts, and a lot of fun was had by all.

I'll be posting video and full tournament results on our site @ bkin-ubf.com, feel free to stop by if you're interested, and that goes double if you live inside the Central Florida area (i.e., Jacksonville to Miami, Orlando, Tampa, and everywhere else in between). Speaking of locals, if you are in the area, show up to our next jam...which will be very soon indeed, and be featuring two of the hottest titles of all time - one from the old school, one from the new. Just know this...it's war.

Big thanks to everyone who came out and played!
- EL
#Community    #GAMENARPS!
Login to vote this up!