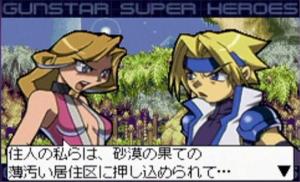 Okay, this is less of a rant and more along the lines of me looking for second opinions about a particular method of extending replay value and lasting appeal.

The storyline in Gunstar Super Heroes is not particularly unique; its decent overall but not going to win any awards for creativity. The thing that really makes it stand out is how it is developed. Each difficulty level provides a different amount of story revealed as you progress. Easy tells the basics of the story, Normal reveals more detail of the story elements, and Hard provides enough back story to give you the best possible ending. Each story progresses through the same basic series of setpieces, however the higher difficulties can change the cruial story elements significanly. Combined with the slightly different story elements that come from playing the two different characters, and that brings us to a total of six possble storylines.

Playing through the game, I started finding that the story was what was keeping me coming back to the higher difficulty levels, depite the fact that the only change gameplay-wise was a decrease in health. While I don't think that its advisable for all games (bear in mind you can complete Gunstar Super Heroes in less than an hour.), I do think that it could be a good method to increase replay value.

What do you guys think?
#Community
Login to vote this up!