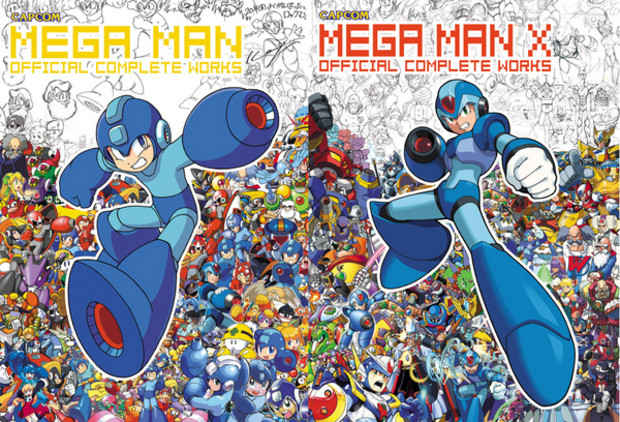 I want to get more into detail, but I don't know if I'll be able to. What I can tell you is that if you like (or used to like) the Mega Man series, you wont be disappointed with these books.

Like many owners of the internet, I've grown to believe that I no longer need "art books". Everything ever drawn or painted is already on the internet somewhere, right? Why bother buying any "books" when you have the internet? It's like every book ever, and it's FREE!

I was totally wrong there. These Mega Man books are filled to the gills with stuff I've never seen before, and can't find on the internet anywhere. The amount of drawings that Inafune has done over the years is staggering, and they all seem to be reprinted in this book.

Did you know that when Mega Man X was first conceived, he looked like a little super deformed version of Cashern: Robot Hunter? Or that Sigma was original three guys, a couple of which looked like robot versions of Dr Wily?

How about Pump Man from Mega Man 10? Did you know that an early version of the boss was around over ten years ago? Or have you ever heard of Smoke Man? He's a rejected Heat Man variant that had a puff of smoke for a head and a cigarette in hand. He's a total badass.

The internet has nothing on these books. Maybe they'll be scanned in page-for-page one of these days, but I don't think that will happen for a long time. There's just too much content here, and more so, once you buy actually buy these books, you'll likely fall in love with them, and want other people to buy them too. Scanning pages from them would only decrease the chances of anyone else buying them, not something I feel motivated to do at all.

So yeah, these books are awesome. The Mega Man X one is a lot smaller than the Mega Man one, but they're both great. The only downside is that the Mega Man one has nothing on Mega Man 9 or 10. Hopefully Udon will put out an addenda this year.

I know I'd snatch it up.
#Community    #reviews
Login to vote this up!