Top 10 Moments in NO MORE HEROES 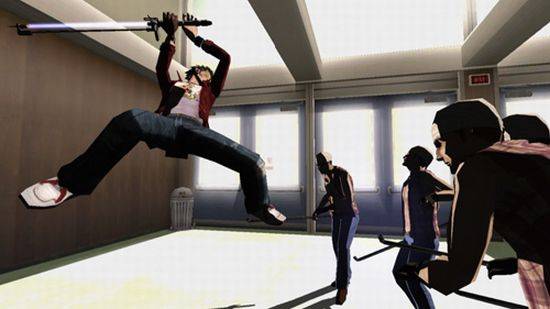 Suda's said this as one of the 5 things that make NMH2 so killer. But think about it. Those who have played this gem know one of the mainstays of the game is the absolutely kickass combat. Why? Because this game uses the Wii-Remote in the most sparring yet visceral way possible. I'll start by going through your very first enemy. The game introduces you to the A-Button first off. At first, you're hammering on the A-Button until you suddenly stop. This is different because most Wii games have you flailing around to swing the darn sword so much that you develop early cases of arthritis or tennis elbow. This game tones it down. Let's you A-button someone till near death watching a flurry of rage and flair from your on-screen avatar Travis Touchdown. Then the screen goes dark. A big 8-bit arrow is summoned forth for you to swing your remote in the same direction. You do so and suddenly the screen lights up again. Next thing you know a head is flying off some poor suckers shoulders, blood is spraying everywhere in a crimson fountain of death. Congratulations! You've just performed your first slash and you are now hooked on the combat system. There's system offers the PERFECT way to use the Wii-remote in a hack and slash combat situation. It also helps put you right in the action by having that very last killer slash performed by the player. Needless to say it blew my mind.

You knew this one was coming right? The main attraction of the game was always these ranked matches to get to the top. Every single moment culminates in being THESE ranked matches. All the money you've earned, the way you upgrade your Katana, the way you choose to train yourself at the outrageously homo-erotic Sensei's gym. It ALL culminates here. These battles are some of the most fun and thrilling you will see in a video game PERIOD. So much so that these are what kept most gamers playing. It's hard to explain why though. Putting it into words is strange because it comes off sounding like Mega Man. You learn a pattern, memorize, try not to get hit and take the fucker down. And the sense of achievement at the end is satisfying as hell. I'll try and take a stab at why they're so good though.

The introductions to each ranked fighter is fantastic. Their personalities are so verbose and over the top, that you can't help but fall a little in love with each (except for maybe Destroy Man... he's a dick). Fighting each of them without the cut-scenes, the game would lose alot of the affect it has. It's amazing how much of each character is conveyed in the cut-scenes, so it's easy to see why almost everyone who's played this is able to pick out a favourite character by personality. And when you lose or win, it almost feels personal. That right there is one feeling I can't explain. The boss battles in this game really excel because of this.

So there you have it. I've no doubt gotten it WRONG in someone's opinion and even I admit I've probably missed alot of stuff (my writing may also leave something to be desired). But let's not forget why I did this. No More Heroes 2 is totally coming. You know it, I know it and we're waiting with Wii-Remotes in hand, ready to take on Santa Destroy's finest one more time.

Will the next No More Heroes be as brilliant and memorable as it's first entry? From the previews we've seen so far, the answer is a resounding fuck YEAH! So for you there, reading this... Get Ready to press the A Button one more time... AND LET THE BLOODSHED BEGIN!
#Community    #Wii
Login to vote this up!

What kinds of games do you play?

Anything and Everything. Generally though, they have to be pretty good to be worth my time </snob>

What are your favorites?

What are you playing now?