Three reasons games are not considered art outside the gaming community.

2:20 PM on 01.13.2010 (server time)    0
Yes, I'm saying it. Games as they are are not art. Okay, games are more craft than art, but I mean in terms of actually being artistic, games are not there. Not for the reasons Roger Ebert seems to think, but they are not art. I'll just cut to the chase and explain the reasons.

Games are trying to emulate other media, increasingly at the expense of the native medium.

It's this notion that "games can be more than games" Actually, I don't disagree with that end, just the means.

Most people don't play games for hours on end. They have other things to do with their time. In short, they don't want a movie or a book when they sit down to play a game. They want a game. Other things can be bonuses, but game developers keep trying to make them the meat of the game, where gameplay is often just the filler.

I was honestly looking forward to Final Fantasy XIII, as I am a fan of the series, but after hearing about how linear the game was, I was turned off. From the pattern of some previous FF games (not all, but some), this smacked of making the game filler for the cut scenes. Even hearing about how the battle system was faster-paced just reeks of trying to get players to the next set-piece as soon as possible.

In short, they want to make a game that's also an awesome CGI movie. But since the most awesome parts require really good timing and reflexes, and you can't position the camera to get the most flashy angle, it's all done by cut scenes. When I watched the new trailer, this is one of the impressions I got from it (along with Vanille having an orgasm on her summon monster at just after a minute in).

And why does this make games not art? It's the "jack-of-all-trades" principle. It's trying to be more than one thing at the expense of others. Good art is focusing the art one one or two things and making art out of them. Even the Bible is more about parables and morals than art.

Now some might think you can't apply the notion of art to a game, and want to do something else with the game in order to make it art. This kind of attitude made Too Human the expensive, bloated mess that it was. Perhaps some of you could try making the best game that you can, and if it allows room for other awesome things, that's just a bonus.

Flashy graphics have turned into an expensive embracing of style over substance.

As a practicing artist (some hand drawing, some pixel art), I find this notion particularly loathsome. Whenever I see an article about something on the Wii, and it's a deliberately downgraded picture, I want to punch those people in the face, not just because they are dissing Nintendo, but because of why. They are actually putting the details of the graphics over what's actually being shown.

At least Paris Hilton is obvious that she's shallow. Those people try to cover it up. Yeah, I'm calling graphics whores shallow. That's what they are.

No, people who merely notice graphics are not graphics whores. I see details in graphics. I can see the jaggies in Wii games on HDTVs. I can see compression artifacts in some DVDs I watch. I find it's easier to see smaller letters in some games in high definition. But that's noticing details, not making them paramount. When it comes to a game, I don't care if in No More Heroes an enemy's beam katana in the distance is a bunch of purple pixels. I just get ready for fighting that guy.

But how this relates to art is that they are not judging graphics in games by artistic merit, but by arbitrary things like the polygon count and texture resolution.

By that logic, the Sistine Chapel is a better work of art Michelangelo did than David, simply because paint has more colors. Or dissing the works of Van Gogh because everything is so blurry. It's just like a Wii game! Aint' I clever?

Now some judge games with more artsy styles, but only the kind of styles they like. Something "cute" is bad, but something dark and gritty is better.

Dark and gritty. Wait a minute. 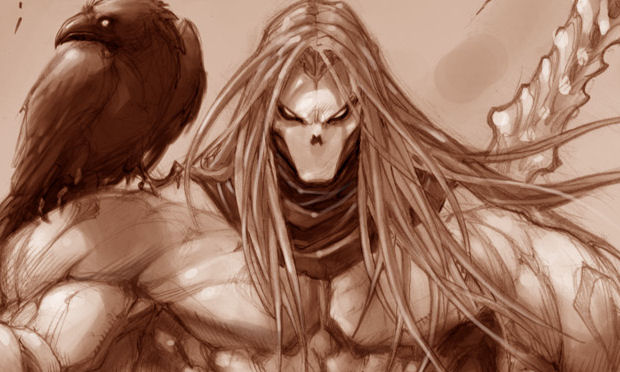 Wait, I'm not knocking Darksiders. I haven't played it, and for all I know, it could be great fun. The thing is the artwork. The look of the characters makes me think less "video game" and more "bad 1990s comic book". What's next? You think Rockstar New York has jerks running it now, imagine if later down the line someone forces Rockstar North to write a stupid and contrived reason for Satan reverting the map of Liberty City to what it was in GTA III, or even I. I wish that was a joke, but Spider-Man fans know what I'm talking about.

That's the kind of "art" a lot of these people seem to be going for. And if it wasn't art with comic books, it won't magically be art for video games.

Not that it's a bad thing for games, just don't try to call it art.

Make good scenes, and only then worry about the details.

BTW, I'm not claiming Nintendo is free from shallowness, just that when it hits them it usually comes in a different form. Different, not better.

But you know what, I could forgive all of that, okay just the first part (not the style over substance thing), if the storytelling in games was actually good.

Not that it needs to be good, just that it's mediocre writing and passable plots. But for the most part, that's okay. Heck, in some imaginative hands, it can even be awesome, like the Disgaea games. Those don't have spectacular dialog, and they don't need to be. It's about just having fun, and I love the games for that if nothing else.

But it's in the "visionary" hands that the problem sets in. So many of them have this bug up you-know-where that they can make games, I don't know, transcend the medium of gaming. From some of the things said by them, that seems to be their goal.

They can't as long as they are going for flashy scenes instead of writing better. Why don't they try actually writing stuff to get some practice. Then they might see just how bad it is. Right now they just throw more money at games to try to cover up their lack of skill. It's a crutch and a costly one at that.

And that seems to be why many don't support the Wii. All this talk about processing power and userbase is just bulls***. The Wii won't let them hide their lack of talent with flashy graphics. Sure it's less expensive, but it seem only some developers are willing to learn that lesson, while some would rather risk losing their shirts. I should make it clear, it's not the lack of support for the Wii. It's the reason of wanting to pretend they are good storytellers and artists, and the HD systems let them have that fantasy better.

I mean, take the comment about the Wii supposedly couldn't handle the title screen of Resident Evil 5. First of all, that guy was full of it. Metroid Prime called and wants its intro back. Second of all, it's a title screen. You're not going to make the game any better with a flashy title screen. Even movies don't need great title cards. Okay, the slit-scan effect in Superman was cool, but it wouldn't have been a tenth as awesome without the John Williams fanfare.

Or go back to the Final Fantasy XIII trailer (I mean, she's actually getting off on her summon blasting the monsters). I agree that the voice acting is good. Just not the dialog. It's tepid and flat (the mouth flaps need a bit of work, the animation should also be changed to match the voice acting, but that could still be remedied). Again, not a problem when the story is filler for the gameplay, but again, this game is trying to do the opposite and the story just won't cut it.

In the end, gaming nowadays tries to be like Lord of the Rings, but it's too often like DM of the Rings.

Haven't heard of DM of the Rings? Look it up. It's a great comic. And check out Darths & Droids while you're at it.

But the basic plot is that Lord of the Rings is run like a D&D campaign, but the DM just keeps railroading the players and giving them barely any action. That's what gaming is like, only way too expensive.

Heck, Final Fantasy The Spirits Within was a great prelude to what's wrong with a lot of this console generation. You get graphics that try to be photo-realistic and fail miserably against the uncanny valley, a weak story with weak dialog, lots of brown, and a company losing millions. Just add some gameplay we've seen a dozen times before and it's more or less what these games often are: not art but trying all the wrong ways to be.
#Community
Login to vote this up!