12:48 PM on 01.12.2010 (server time)    0
So, a belated Happy Holidays to all! Holy crap! So far I’m actually keeping up with my “resolution” and all, and I have yet another edition to this series up in a reasonable amount of time! Shocking? I know! I’ve also decided I’m going to try to get involved in a few more discussions and such on the site, and I’ll start off the new year and such by saying that I personally find Okami to be a really good game and well polished, but is WAY too over praised! Just some thoughts! ^_^ With that said, in this edition of A Compulsive Collector’s Haul, we’ve got yet ANOTHER super trade that occurred from the Trading Forums, only this time I traded with the self-proclaimed “Sultan” of trading, Wry Guy, and ‘twas quite the trade if I were to say so myself. I’ve also got my usual haul from Cash Converters, some awesome Christmas/Boxing Day (Canada’s equivalent Black Friday) deals, my Destructoid Secret Santa (of whom I STILL don’t know who it was, even through doing some detective work), a somewhat random Christmas gift from the coolest 55 year old locksmith from San Jose that I play Call of Duty with, and a Resident Evil 4 Chainsaw Controller! Enough with the chitchat, on with the pictures! 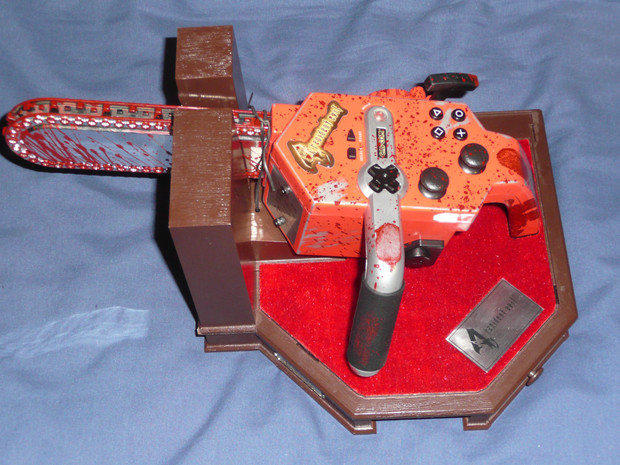 Each and every controller has a unique blood splatter, making each and every one ever made unique and special. With that said, you can even “start” it up by using the pull string above the normal buttons.

Well, that concludes yet another haul of mine. So far, so good in keeping up with more regular posts. Once again, look forward to seeing stuff from the BIGGEST Trading Forums trade to go down, and that will probably last for quite a while. It’s a pretty mind blowing trade once you see it, and once I’m caught up on that, don’t forget that fellow collector JoeCamNet has sent me some pretty epic stuff too. Thanks once again to whoever was my Destructoid Secret Santa. Also, an EXTRA SPECIAL thanks goes out to Cataract for organizing the whole Secret Santa! Kudos on a smashing success mate! Until next time folks, latez!
#Community
Login to vote this up!