3:29 PM on 01.06.2010 (server time)    0
Howdy folks! It’s time for yet another edition of A Compulsive Collector’s Haul! Hopefully you all had a good Christmas and New Year and such! I usually don’t do New Year Resolutions or the like, but I’m going to try to update this series more often and such, as this is basically a mid-November to before Christmas haul. With that said, in this edition we have a pretty BIG trade from the Trading Forums, a dozen or so games picked up in November, some mega awesome Final Fantasy X-2 loving, and some pretty bitchin’ swag! On with the show! 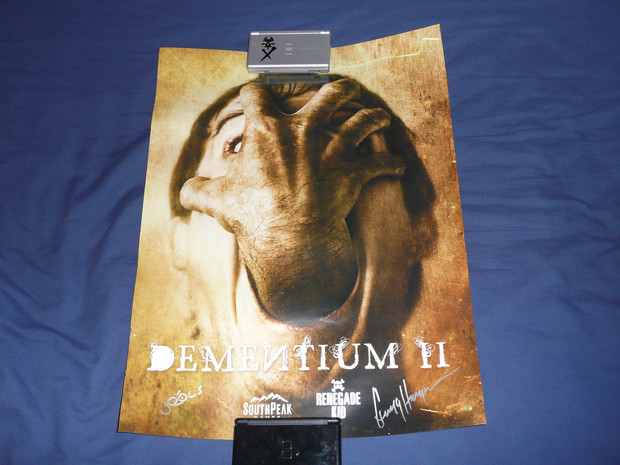 So, if you guys followed the main site and all, then you may have seen how there was a promotion by SouthPeak, where if you preordered Dementium II, and took a picture of the receipt and emailed them, you could get a signed poster of the game. Well, I did that and here is the result of my “hard” work. As you can see in the bottom corners, the poster has been signed by Jools Watsham and Gregg Hargrove! Pretty cool promotion and such if you ask me! If someone from SouthPeak reads this, thanks guys! Keep up the good work! Make another Ninjatown! ^_^

So, yet ends another edition of A Compulsive Collector’s Haul. As I’ve said, I REALLY do plan on trying to update this more often, as I have at least probably another 2 editions that I need to get out as soon as possible. One involves a pretty big trade with Wry Guy and some miscellaneous games and such. The other involves receiving my Destructoid Secret Santa, as well as a bunch of stuff from JoeCamNet. Until next time folks, have a good one!
#Community
Login to vote this up!