Awesomeist's Reviews of Many Games

My entry into the Steamtoid Community 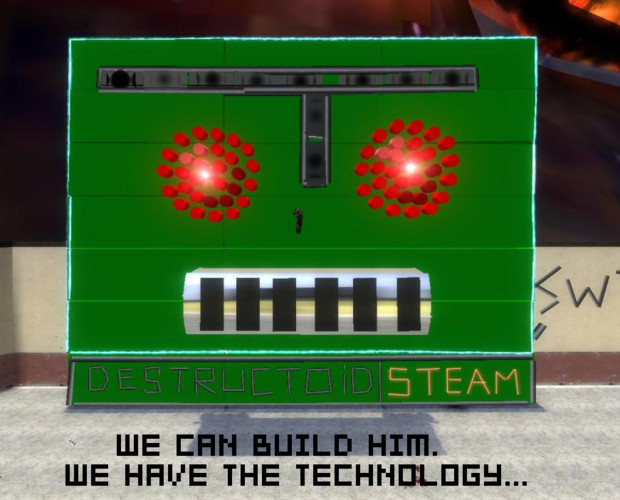 So, a small few of you may have heard of the Steamtoid, the Destructoid Community that exists on the Online Game Distribution Network Steam. Now, this may have previously seemed completely dead, and just a pointless group to join in the first place as a result, but over the last few weeks, it's started to become slowly more active, especially the chatroom, which you were lucky enough to find even one other person in at most times. It seems now times have changed.

Why exactly am I making a blog post about this? Because I feel it's a great way to get more involved with the community as a whole, and a great way to find some new gaming friends, or just generally, new friends. You get to know people a lot more personally in the Steam Community than looking at their blogs. The chatroom is active at most times, A variety of European, Asian, and American steam users are constantly in the chat, looking to play games of all sorts together, so it is rarely quiet as of recent.

Becoming a part of the Steamtoid community is incredibly easy. First off, either buy a game, download a demo, or register a steam-appliable game (Anything made by Valve) using your own Steam account (all availible at http://store.steampowered.com ), and then just search groups for "Destructoid". Join, and congrats, you're a member! And there's a lot more to do than just chat if you're a member of Steamtoid. You'll find that the chatroom is usually most active on a friday, due to the events hosted every week, "Friday Night Fights".

Most people will probably have already heard of FNF, but just incase you haven't, it's a weekly event where Destructoid users can play arranged matches on any game. On Steamtoid, we're usually open to discussion about what games our FNF will be based on, with regular choices of Left 4 Dead, Team Fortress 2, and many other games. Though, if enough requests are made, they'll list another game for FNF.

Just recently in the Steamtoid Community, members (Such as myself, and a few others), have begun to adopt DTOID tags, playing in games together as teams. This is a great experience overall, a community playing together rather than just playing online games off of your own back, and has already resulted in some great experiences (Mostly in Garry's Mod, as you can see at the top of this page, though it was an amazing hour, and the video is on it's way to a blog near you soon). What could result from Steamtoid members playing together? Chaos? Fun? Hilarity? Probably all of them. Probably worth finding out yourself.


So in closing, take a look at Steam if you already haven't. The Destructoid community is alive and kicking on it, and is willing to accept more people at any time. Even if you don't have an amazing computer, there will be something on there that you can play with other people, there's always a way. On a final note, if you must blame anyone for Steamtoid community coming to life, blame Doomsday Forte. He did it.
#AboutDestructoid    #Community
Login to vote this up!

My name is Grant. I go by many other aliases, such as Dirtster, and Raggak being my most popular ones, but decided it was time for a change, and came up with Awesomeist. Why? Because I generally wanted a name that was awesome.

I live in the UK, currently 20, and I'm a student at the University of Bolton, learning how to program videogames. It's pretty fun.

I'm currently with my amazing girlfriend Shauni, and we've been together since September 24th 2006, and I've never looked back on my life since that day, making the moment I'm writing this 4 years and 6 months together. She completes my life, and I wouldn't have it any other way!

I've been amazed by videogames since I was a young child. My first gaming experiences were various games on the Sega Mega Drive/Genesis, such as Rocket Knight Adventures, Sonic 1~3 & Knuckles, and Streets of Rage. I then grew through video games, getting a PSX (illegally chipped, haha), and borrowing an N64 on occasions to keep my pallete wide. So, whilst I have not been around since gaming started, I've definitely seen a lot go past.

I also have a great love of Japan, and I have done ever since I watched my first episode of Pok�mon as a child. I became obsessed and hungry to learn more about the country and its ways, and I have recently done so by learning the Japanese language at a GCSE level, and visiting Japan for a total of 10 days, seeing Tokyo, Owakudani, and Kyoto. I would definitely go again, and recommend that anyone who hasn't gone, does. I shall be returning again one day, but when will depend on how my life goes from now on. You'll most likely see my love of Japan seep through in my blog entries.

Now, as for where I am at the moment in gaming? I own the following consoles (including ones I share with my Girlfriend): Playstation 3, Playstation 2, Playstation Portable, Nintendo Wii, Nintendo DS Lite, and XBox 360. I have owned other consoles before hand, such as: Sega Mega Drive/Genesis, Super Nintendo Entertainment System, Gameboy Original, Gameboy Advance, DS Original, and Playstation 1.

Whilst I do play a huge variety of genres, the type that I typically focus on are as follows; Japanese RPG, Strategy, Shooter, Action, Music, and Racing. I play most other genres as well, but the only genre I tend to avoid is Sports, purely because it doesn't interest me.

And finally, what games am I currently playing? I can't be bothered to write this out because it changes too often. I do have a lot more games, but I focus on these right now.

If you want to contact me at all, leave me a message on this blog, or contact me by my XBox Gamertag: Raggak, my Steam: Awesomeist or my PSN: Awesomeist. Whilst I do have a Wii, I'm currently not using it.