Steam Sales: The best days of Game Shopping EVER!

8:57 PM on 01.03.2010 (server time)    0
Let me just admit this right now: I'm a sucker to games. I have been ever since I had Super Mario Bros./Duckhunt on the NES, I always have had enthusiasm to play computer games and get as far as possible without getting bored or throwing the thing away like it's a cardboard box, but what has happened over the past 2 months is nothing short of astonishing.

First of all, rental site LOVEFILM started Game rentals for all consoles bar the PC. I think it would be relatively awkward to make PC games work for the start, and also DRM will make it nigh on impossible to rent PC games, let alone buy them...

That is where Steam comes in.

Unbeleivably, the last two months I have been draining money away at games I might not have even bothered with in the first place, to others that I really did want, but was reluctant to fork out for it, even if it is cheaper than sometimes buying the retail box from the stores.

It started in November where they trialled (or not, well for me it is) a one day sale every day for 5 days and nights, starting at 12PM EST (or 7PM UK time), you had 24 hours to see a game you'd play and then purchase it. I started with Left 4 Dead Game of the Year Edition (Which is infuriatingly Ł35 in one store I won't disclose), and then I bought Star Wars KOTOR.

But it hasn't stopped there. Oh god. 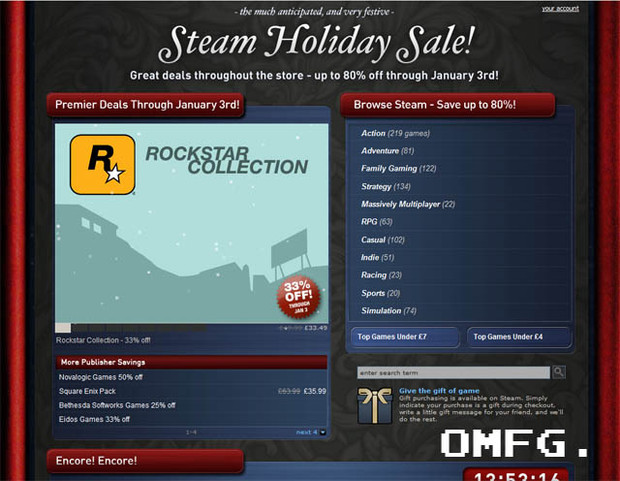 The 12 days of Steam Christmas sales have been a huge eye-opener, and I have purchased a lot of games at unbeleivable prices. From the quirky Osmos and Mr. Robot, to the blockbuster titles such as Mass Effect and even the Oddworld Games, which I fondly remember on the PSOne.

And all of a sudden you might have to agree (or not) that it seems far superior than the consoles for games as well as doing a multitude of other things.

Not that I hate console and handheld gaming, far from it, but if makers actually start lowering the prices of games on the PS3 and 360, the PC will undeniably be the superior platform for years to come.
#Community    #PC
Login to vote this up!