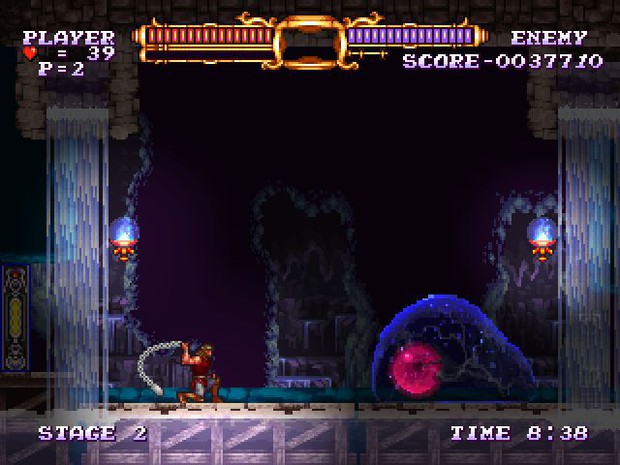 Just spent the last three and a half hours trying to beat Castlevania: The Adventure Rebirth. I couldn't do it. The fifth level is like it's own game. It's sooooooooo long, and really tough, at least on Normal.

Will finish it soon and get the full review ready for you. In the meantime, here are some impressions.

* There are tons of secrets and branching paths, more than in Rondo from what I can tell. They don't always lead to anything interesting, but they definitely add to the replay value. Like that slime boss up there-- I haven't even found him yet.

* Also like Contra Rebirth, if playing on a widescreen TV, you should immediately change the dimensions of the game to fit your screen. The game feels overly claustrophobic at the the default size when played on a HDTV.

* It's not a port of the GB game. It's totally new, though every enemy from the original Castlevania: The Adventure makes an appearance at some point.

*The whip power-up system is much improved. Even at full strength, you can occasionally get a power-up that lets you shoot fireballs from your whip. It only lasts for a limited time, but the potential to grab one makes run of the mill candle whipping much more of an event.

* The music is a little grating. Very synth-y and in your face. You might be better off turning it down a few notches.

* The bosses are pretty awesome. Most have some sort of desperation move when their health is almost gone. The first time you see them, you might be like "WHOA-LY SHIT".

*The graphics are the best in the Rebirth series thus far. I'd say they're a little better than Rondo over all, thought the animation isn't always quite as good. The "polygon trickery" of SotN works it's way into things sometimes, and looks pretty awesome.

* Now that I've turned off my console, I'm actually looking forward to beating all the levels again.

Castlevania: The Adventure Rebirth has, for the moment, entered my top five "traditional" Castlevania games. It's at the bottom of the top five right now, below Rondo, Castlevania III, Castlevania MSX, and Super Castlevania. Hmmm, maybe it's actually tied with Bloodlines for fifth. It's hard not to love Bloodlines.

Either way, it's definitely worth ten bucks for any fan of classic Castlevania. If you've never played any of the pre-SotN vanias, then this is a great, low cost place to start. If you have played them and you hated them, well, this probably wont change your mind that much.

Or maybe it will. I guess that depends on what you don't like about them.

Hopefully the full review will help you figure that out.
#Community    #Wii
Login to vote this up!