6:23 AM on 12.28.2009 (server time)    0
One of the problems I find with end of year polls, is that most of the time I can't remember what actually came out this year. In other media, like film or music, it's maybe a bit easier to associate releases with the seasons or time of the year, but by the time we get to October gamers seems to develop a kind of tunnel vision where the accepted "best games of the year" candidates are all released within about a month and a half period. But when we look at the actual releases, there was plenty to like at the start of the year, like Street Fighter IV and Resident Evil 5. Also, with high profile delays, likeBioshock 2, Splinter Cell: Conviction and Diablo 3 pushed into 2010, this year's list of candidates probably isn't as big as people would think. So what did I pick? Modern Warfare 2, Brutal Legend, Left 4 Dead 2 or Curse Of Monkey Island Special Edition? No, my game of the year is Plants Vs Zombies. 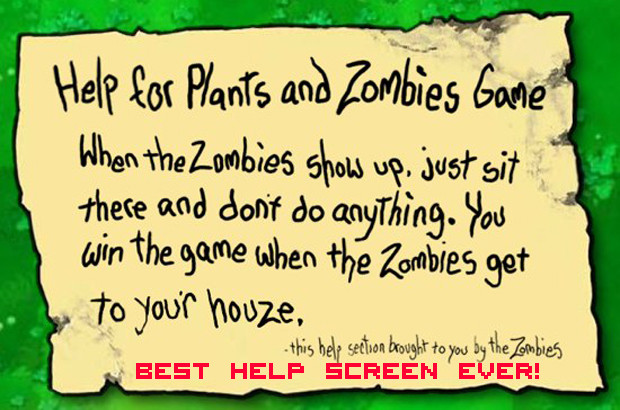 Plants Vs Zombies is the game that proved that so-called "casual" games weren't worthy of attention or coverage by the hardcore press. What madePvZ a casual game was the fact you do a round in just a couple of minutes, so it was great for quick games. I think PvZ was also thought of a casual game for no other reason than it was a $10 downloadable Pop Cap game. But it's a game that I find myself inexorably drawn to. 5 minutes to spare? Fit in another round of PvZ! That's why it's my game of the year; whereas I grew quickly tired or frustrated with other games, PvZ always drew me in for more zombie bashing fun.


Best ending song since Portal.
#Community    #PC
Login to vote this up!