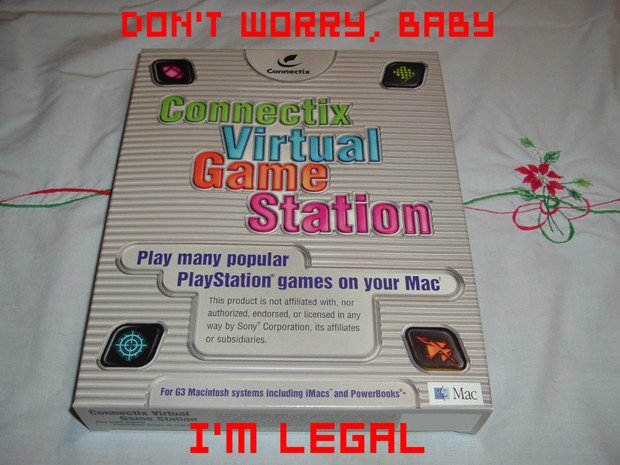 Connectix Virtual Game Station is a Mac application for emulating the Sony PlayStation. I used this to play Final Fantasy VII (and later, Final Fantasy Tactics) on my iBook, without going out and buying a PS1 - it worked pretty well, too, aside from rare graphical glitches during FF7 battle scenes that turned into red-tinted Terminator-vision.

The story of VGS is sad, but brief: Sony tried suing the living piss out of Connectix, but was never able to get anywhere, because Connectix's reverse-engineering of the PlayStation hardware was, as far as anyone could prove, 100% legal. Plus, it was designed to play commercially-sold game discs, so there was no argument for it promoting the use of illegal game rips.

So after a protracted, futile legal battle, Sony caved. They even appeared to turn the other cheek, and partnered with Connectix to further develop the product. Shortly thereafter, it was permanently discontinued.

Connectix also made another product you may be more familiar with: Virtual PC. In its original iteration, VPC was a method of running an emulated Windows environment on a PowerPC Mac. Microsoft bought (and went on to neuter and marginalize) Virtual PC in ... (checks Wikipedia) 2003. Connectix ceased to exist later that year.

Merry freakin' Xmas!
#Community    #Retro
Login to vote this up!