10:48 PM on 12.19.2009 (server time)    0
I bet the second the “Love/Hate” Monthly Musing came up a majority of gamers went straight to JRPGS and the “Hate” portion of the title. It would seem that I’m no different, but I really do want to finish Final Fantasy XII and love it to death as I tend to do with Final Fantasy games. I’ve heard all the praise for its rich story and dynamic characters, but I can’t bring myself to keep going. I can link the reason to one aspect of the gameplay that makes me want to toss the game disc into rush hour traffic. That aspect is the awful battle system.

I can’t blame the Final Fantasy developers for wanting to try something new. Everyone can agree that the battle system used through Final Fantasy X worked, but was becoming archaic. The system definitely needed to change. When Final Fantasy XI Online was released, we were introduced to the new battle system meant for the MMO community. This was the same battle system that was ported over to Final Fantasy XII, a game that’s strictly a one player experience. This is a shame because I really dislike MMOs. 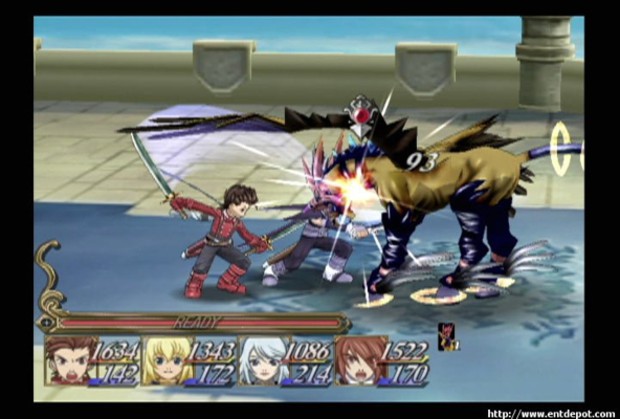 In Tales of Symphonia, however, positioning means everything, leaving battles more up to skill and on the fly tactics than menu navigation

Even though Final Fantasy XII allows you to run freely during a battle, it doesn’t actually affect the battle itself. You can stand directly behind an enemy and watch him attack where you once were, only to take damage. You can hit an enemy and run away, being a good ten feet away from the enemies attack and still get hit. It will quickly dawn on you that you’re just playing the same old Final Fantasy battle system with some minor MMO clichés tossed in for good measure. All the free roaming does is help you avoid random battles by not attracting attention (Or “aggro” as the MMO players call it) and have you run away manually and waiting for the invisible bungee cord all enemies are attached to fling them back to their starting positions. It doesn’t take long before that same feeling of grinding kicks in.

My copy of Final Fantasy XII continues to sit on my shelf collecting dust. I know I want to finish that game after hearing how great it gets towards the end. Unfortunately the clumsy and convoluted battle system meant for MMOs just takes all the fun out of the game. Instead of rewarding you for skill and strategy like Tales of Symphonia, it penalizes you for not pausing the game every few seconds to micromanage every little thing about your computer partners and seems to loathe the idea of open world battles that aren’t just glorified dice rolls. Maybe one day I’ll be able to get over that system and be able to enjoy the much lauded story I so desperately want to witness. However, it’s far more likely I’ll just get an MMO loving friend to play the game for me and allow me to watch the story while I play Mario Kart DS during the battle sequences.
#Community    #OpinionEditorial
Login to vote this up!