Three improvements I�d like to see in Dragon Age : Sequel

One of the countless cool aspects of this game is that each of the twelve class specialisations is deeply rooted into the world�s lore. You see your drunken dwarf friend pumping himself into an enraged state of madness and you�re like �Whoa, I want my fighter to do this too! Can you teach me?!� and he�s like �Yeah sure, here�s the booze!�.

I had watched the cinematic trailer with Morrigan turning into a monstrous spider mid-fight, so when I met her in-game I took the opportunity to make friends� don�t you look at me like that! Anyway, after I explored her bestial side-I mean, I asked her as a friend to teach me her shape-changing ways. On the following battle, I eagerly activated my spider form mode after I emptied my MP on spells. And waited. And waited. And stared at a progress bar. Meanwhile, my friends made short work of the remaining foes, before I finally popped into a spider.

The novelty was there, it was cool to move around as an arachnid, but I was quickly let down by the ridiculous damage and limited options this form offered. Even several levels later, when the �improved� shapes are available, their use still doesn�t justify giving up crowd-control and area of effect spells, especially in this game where enemies always attack in numbers. Coupled with the ridiculous casting time, I ended up never using my animal forms except to cross maps quickly using the insect swarm. It�s a shame, because a shifter class always has the potential to be so much fun, and the graphic models were pretty neat too�

Increasing difficulty as the story progresses

Yay, another group of bite-sized darkspawn with a caster...

One thing that has frustrated many Dragon Age gamers, ol� Jim included, is that the game�s battles offer sudden and severe spikes in difficulty, and I mean outside of boss fights. This ends in frustration as your friends drop down crying like they�re hit in the face by the newest Supersoaker; you have no choice but to load your game while you realize that your approach against these apparently average monsters needs refinement.

One could argue, and I would agree with them, that breaking players� expectations of non-boss encounter difficulty is a GOOD thing. What bothers me though is these challenging encounters stop happening later in the game, when you can petrify the enemy caster, choke the archer in a force cage and pelt the rest with a blizzard. Simply put, so many crowd control abilities are available to all three classes at that point that only monsters with ridiculous HP and defenses (read: bosses) will still be standing after everyone has exhausted their initial stamina bar.

It�s okay to move on from darkspawns to dragons (in fact the dragon fights were awesome), but I don�t think it�s right that I could dig in my BBQ chips bag while Ohgren cleaved through all the whelps laughing. I�d love harder battles next time, where the game assumes you to be level 20ish and calibrates enemy stats and add difficult terrain accordingly. It�s quite silly that one can do the whole Denerim final chapter without using any of the armies it took most of the game to recruit in the first place� 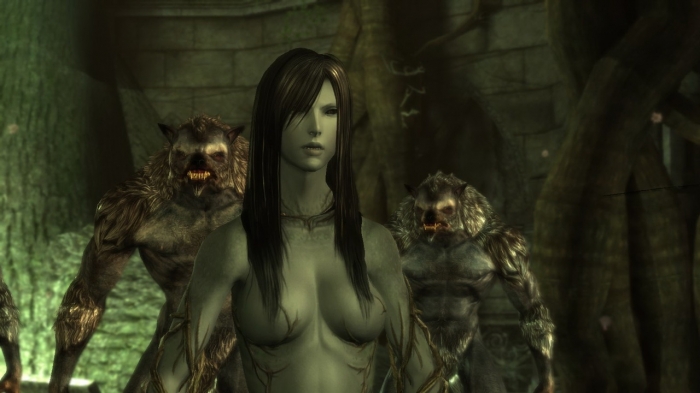 This picture has bewbies and hairy creatures.

Huh oh. In before the insults asking me to go back to The Sims! Seriously though, I felt that while the romantic options available were well-crafted, �player� characters you meet cover too little ground, personality-wise.

If you character is a man, you have the choice between:

Otherwise, as a woman character, you get the wonderful choices of:

Why stop it there? Wouldn�t Ohgren make a great romance option for females? If you have helped him on his sidequest, you must have seen how the little guy fancies bed play! Why not break a taboo while at it? Your male character could be in his later adventuring years, being the perfect gentleman with Wynne near the campfire! *GASP* That�s right! Old people have sex too! I�ve never seen romance between older people represented in a video game before, here�s your chance to do another inovation Bioware!

I couldn�t possibly close the topic of romance without speaking of Alistair, so here goes: besides my opinion that he is a clear candidate for a closeted homosexual, the heated debates regarding this subject only point to the fact that male gay characters that aren�t either flaming queens or hairy bodybuilders are severely underrepresented in video games. You know, for example like regular gay persons in the real world. Oof. Sorry, I didn�t mean to shatter your illusions like that.


In short, if the next Dragon Age episode shows improvement on these last three elements, it would make me so happy I would promote Bioware to Greater Deity in my personal pantheon, where they�d get to sit next to Atlus!
#Community
Login to vote this up!