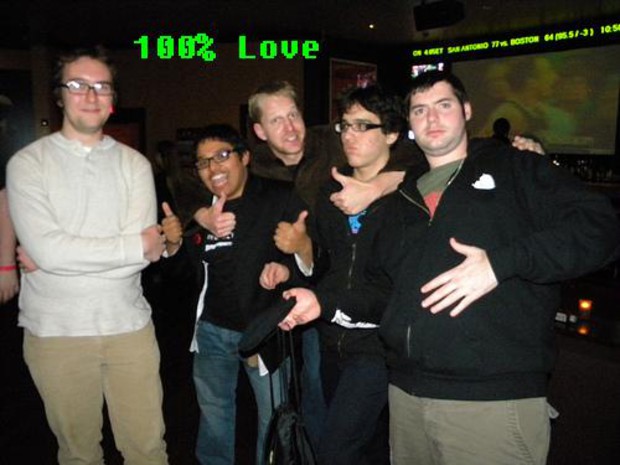 It was amazing. Absolutely amazing. I joined Destructoid about six months ago after lurking for about a year, and hearing stories about the community from my good friend Volkarin. During my time I have enjoyed meeting several Dtoider late night Skype calls, and founded Dtoid Fredericton with ScottyG ( There are two of us). I went to PAX East expecting a good time, and had the time of my life.

I arrived Thursday night in Boston after a seven hour drive with ScottyG and Volkarin. After going to our respective hotels we met up at Uno's Pizzeria. Before I continue I would just like to mention that my hotel was amazing. There were bathrobes, a rubber ducky, and decent sized closet. A Closet I so happened to sleep in for the weekend. Back to the story. I got to say, Uno's probably has one of the best group of servers I've seen in a while. Phenomenal waitresses that let us take up whole sections of the restaurant. Not to mention they kept track of everyone's bill pretty well. Any place that has a waitress that is willing to help me find a Taco Bell is absolutely amazing in my eyes.

Any who, So we had a fantastic first night with much singing, though I was bit shy and didn't introduce my self to very many people. That changed Friday night though. The first real day of PAX East blew my mind. Early on I lost my "phone" ( I was using Volkarin's phone, and he totally left me alone) so i found my self wandering the expo floor, and going to interesting panels. I had so much fun wandering about that I forgot to get in line early for the Protomen concert which I had been nerdgasming about since I found about it. Fortunately I'm the luckiest man alive, and I ended at the very front of the stage. I was so pumped by the end of the concert That I had no problem socializing that night.

The rest of PAX went as I had thought. Lots of joy and merriment. Some of the highlights that I haven't already mentioned include:
- Analoge being traumatized by the food court
- An extra long hand shake with Kauza. ( I just didn't want to let him go)
- Nik Monroe. All memories of Nik are fond memories.
- Singing Queen and Journey out side of Uno's
- Zen's awesome chiptune concert
- Playing Miegakure, Limbo, Monday Night Combat, and Splinter Cell Conviction
- Analoge impressions
- Nerdgasming with JohnnyViral at the Rooster Teeth panel
- 321GOcast vs Let'sCybercast westside-story-style dance fight
- Pictochatting in Jillians
- Being forced to Record the "best": Let'sCybercast Sunday Night ( Y'all should look forward to that)
- All the goodbye hugs

My love for you all has evolved into something far to powerful for me to contain. Thank you all so much for making my first time so enjoyable. For cereal, y'all are so pringles it's ridonkulous. Silly words aside, I already miss you all!

Much love,
Mr. Chewie
#Community    #Industryevents
Login to vote this up!

Hey y'all! Name's Alex Chibante, but my friends call me "Chewie" ( Lame story). If I were to tell you about myself and my personality it would be biased. How you perceive me, for all intents and purposes, is who I am.


Currently a student at the University of New Brunswick