Top 5 Games That Should Be Remade Into PSN/XBL Arcade Games.

4:57 PM on 12.01.2009 (server time)    0
Now I'm going to be frank, I think that Digital Distrubution is one of the best ideas for video games. Many gamers fear that "monopolies" of Sony's PSPGo or Valve's Steam. I see this aspect of gaming to be great for games that were great in the past but didn't stand a chance against big name franchises. Downloadable games are also great for developers to put out games that are great, but would never sell at full price. Thinking back to the previous generation of gaming, there were a lot of games that got cast majorly cast aside. These games would have been great seller is they didn't come out at $60, meanwhile most other games came out with much more content for the same price. Or maybe it's a game that was not "mainstream" enough to do well but has a major cult following and is hard to find. Either way, these are my choices for Top 5 Remakes for the PSN/XBL

This game was one of the most fun games I have ever played in my life. Fellow Dtoider Chainsawface just put out a blog about how awesome it was. (http://www.destructoid.com/blogs/Chainsawface/why-gotcha-force-is-the-best-third-person-shooter-ever-156439.phtml#story

Now Gotcha Force was a game about collecting miniature robots and using them to save the world. There was an immense amount of variety among the robots you could collect. You had Ninjas, Transforming Vehicles, Witches, Flying Fortresses, Cowboys, Super Heroes, and even Nuclear Warheads. 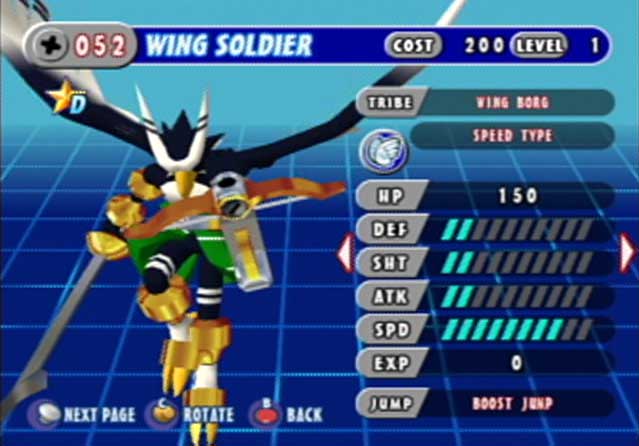 And whatever the hell this thing is...


Another thing that made Gotcha Force such a fun game for anyone who got their hands on it was the 4 player death matches that ensued. You could make your "Force" with up to 30 "Gotcha Borgs". Each player starts off with the first one on their list and when that borg dies, they play as the next one until the last man standing wins.

As fun as this game is, you could unlock all 292 borgs in about 4 days play. Not something that I'd pay full price for. And most gamers who saw this Gamecube title also saw that RE:4 was on the same shelf for the same price. Which game do you think they picked up. My friend had the courage to try something new, and we loved spending hour battling each other with miniature instruments of doom. Now imagine of this game were $15 and downloadable. I've seen a lot of games made just for fun do well at this price. Fat Princess, and Castle Crashers show that it can be done. And Gotcha Force would be a great addition to the PSN/XBL collection.

Before there was Nero with an overpowered arm fighting demons, there was Gene with an overpowered arm fighting demons......wait a minute...
Anyways being the last game to come out of Clover Studios before Capcom game then the axe, God Hand was a favourite among fans of (as well as an homage to) the old school beat em ups of the late 80
s and early 90s. It garnered enough attention to have IGN's Chris Roper not only blasted by fans for giving to game a 3 out of 10, but also by fellow IGN workers. The game starts out like any other Beat Em Up. No Intro video. Just Push Start. Select Difficulty. See beginning cutscene that explains simplistic story. Beat the shit out of people. Sounds like nothing new and exciting right? But get this, it's done in 3-D using the Resident Evil 4 Engine. Sound Better? How about being able to customize your combos with over 100 individual moves? Like the Pimp Slap, and the Chin Rocker, and the Drunken Fist. And then there's the hilarious grabs. Spanking women and kicking demons in the crotch.

It's called the "God Stomp" for a reason.
Sadly this couldn't save Clover Studio from the hands of Capcom who pulled the plug on the guys who made this game. More people need to see this game, and since we aren't getting a backwards compatible PS3 anytime soon (sorry crybabies) a PSN/XBL re-release would be fantastic.

Another 3D beat em up. But this one did what Jet-Li's videogame failed to do. amazingly simple 360 combat. Being able to counter from anywhere is amazing when your taking on a gang of 7-10 street thugs.Heavily influenced by Tobal 2, The Power Stone Game, and Ehrgeiz (can't go wrong there) anyone who's played this will agree with me when I say this. Tekken 6's Scenario Campaign should've been this game. Over 50 characters to play as or beat up. 100 missions, 4 player multiplayer. 34 different styles of fighting. Dozens of weapons. Smart AI. This game was so stuffed with great content it literally almost burst. http://www.meristation.com/EPORTAL_IMGS/GENERAL/juegos/PlayStation2-Accion/48/IMG-cw438e4b31bbca1/urban_reign3pe.jpg[/img] Great Teamwork is another helpful feature. As you can see.

Awesome moves made this game beautiful to watch. 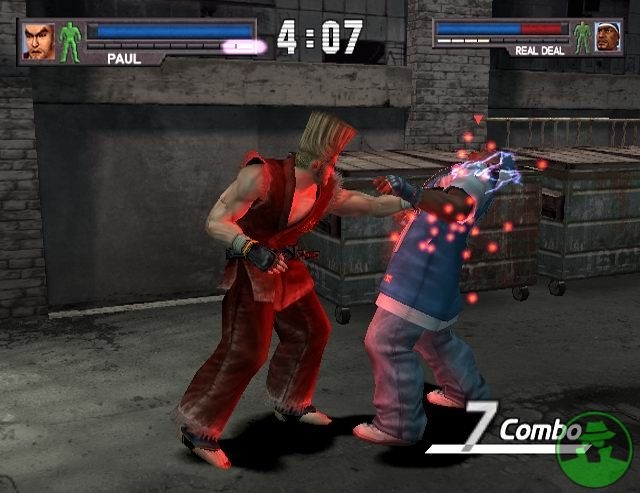 Paul And Law from Tekken make great cameo characters in this characters.

#2. Jet Set Radio Future (By Sega for the Xbox)

This game should have been successful. This game being majorly ignored proves that there is no God. Honestly I think that Sega made a bad choice putting a game like this on the Original Xbox. I mean look at this.

Now why would you put this on the "American" console.

This game was so unique in concept, idea, and gameplay. Yet was ignored majorly in everywhere. At least it's predecessor had the Dreamcast in Japan to fall back on. This amazing title wasn't so lucky. There should've been a much larger support by Sega for this. They know that people love it, and the recent success of No More Heroes shows that people want games that are off the beaten path. Hopefully this becomes true http://www.destructoid.com/leaked-sega-doc-discusses-ps2-dreamcast-on-ps3-149474.phtml.

I had to put both games in the #1 most wanted re-release spot. Come on the undeniable charm of this game. In my eye the sequel was another victim of "Great game, wrong console" as stated with JSR Future. With an immaculate story, and the perfection of quick time events this game proves that some of the best video game stories can only be told from a cinematic point of view.

This game inspired some of the best ideas in video gaming today. Take a look at Indigo Prophecy, and the upcoming Heavy Rain. Even the Yakuza series to a lesser extent owes major thanks to Shenmue 1&2.


Well there you have it people. These are the 5 games that I believe need to to be re-released on the PSN/XBL. There are other worthy contenders but in my opinion, these are the ones that come first.
#Community
Login to vote this up!