Steam-opoly: Why Valve's already on top and why no one can do anything about it 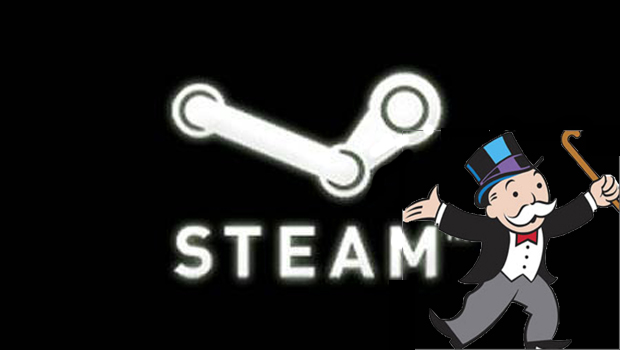 I know, it's the same one from the front page, but I don't have Photoshop where I'm at, so I can't put Gabe Newell's head on Scrooge McDuck like I would want to. I'll get to it later.

Is Valve building a digital distribution monopoly? Josh Tolentino asked that question in his write up on how Steam has roughly 70 percent of the market share today. But it's a flawed question because it supposes that Valve doesn't yet have a monopoly on digital downloads for the PC gamer.

Or rather, I should say, it has an incredibly strong de facto monopoly that has arisen for two major reasons, each of which I'll go into a little detail below to explain why Steam is king, and no one's stealing the throne anytime soon.

Lack of strong options: By strong options, I mean programs comparable to Steam. Who else right now offers not only digital downloads, but chat, friends list, achievement and stat tracking, server lists, anti-cheat support, pre-loading and cross-computer settings for games? There are others in the video game industry that do, but they're all on consoles. Nothing else on PC even really comes close to the kind of package Steam offers its users. Yes, it does limit when you can play your games because of the online connection thing, and there are complaints about prices and region locking and resale of titles, but for most gamers (including yours truly), they are really negligible when compared to all the advantages. It's a bit like how when Windows started to become popular, everyone flocked to it because ... well, Mac OS really couldn't hold a candle to it (remember, for some time, Apple was worse than they are now ... even if you think they're bad at the moment) and nothing else could provide a strong option against Microsoft's product. That's how they nearly conquered the entire operating system world and why Linux, Chrome and Co. are going to be chipping away at their huge numbers for years to come.

Steam/Valve have most of the popular PC titles out there already: When you've got all the big games coming out on the PC, it's hard not to have a monopoly on the market. Simply put, Steam gets the big games, and thus, gets the people who want those games. So let's take a look at just how that's worked out:

Recently, there have been two big PC-related game releases: Borderlands (Steam had it), Modern Warfare 2 (Steam-exclusive) and Left 4 Dead 2 (Valve made it). Other popular PC titles include Team Fortress 2 (Valve), Dragon Age: Origins (Steam), Champions Online (Steam), Torchlight (Steam), Aion (Steam), Counter-Strike: Source (Valve) and about the only games not Steam or Valve-related on this list: MapleStory, Sins of a Solar Empire the ever-popular World of Warcraft.

Yes, MapleStory is still apparently popular. I don't know why. But the point is to look at the list of games above and notice the trend: almost all the games came out on Steam.

In this sense, Steam's a bit like Wal-Mart: they've got everything, so why bother going to seventeen different stores when you can go to one place AND have everything easily manageable? There are trade-offs, that's for sure, like offline play, but for games like Champions Online that don't have offline modes, like TF2 that only have LAN as an offline option of any sort, and games like Left 4 Dead 2 that have one basic offline option (hi, single-player campaign!), it doesn't matter. You're going to be online to play those games anyways. And like Wal-Mart, Valve loves cutting Steam prices to give users deals and bundles games together in affordable packages you'd have to be stupid to not buy. The whole "low prices" thing does work (as evidenced by Wal-Mart's explosive growth) because they keep people coming back to see what your next deal is going to be. Impulse has weekly deals, too, but they don't get noticed very much because often, the titles getting mark downs aren't as sought after. And because, as we've been told before, Steam pays the little guys better than the other platforms do and they get exposure to Steam's large installed userbase, they're more likely to come back.

Can anyone stop Steam? The only company that can break them at this moment would be their Washington state buddies, Microsoft. They have the money and resources to build a comparable service with Games for Windows Live, but considering how focused they are on the Xbox 360 at the moment, I would doubt they'll be working on plans for this quite yet. So, at least for now, Steam has their little monopoly. One day, yes, there will be challengers, as most de facto monopolies tend to draw in competition trying to take them down, but until those challengers arrive, we'll be fattening Gabe's wallets for quite some time to come.
#Community    #PC
Login to vote this up!