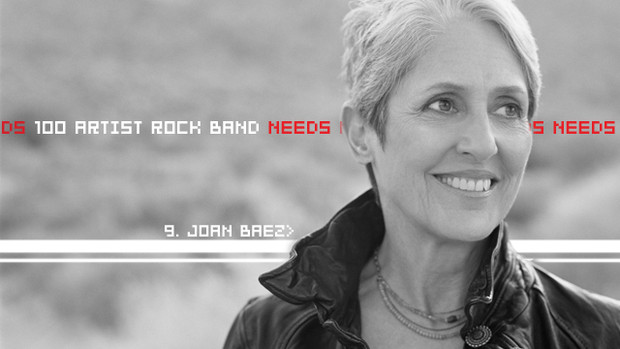 WARNING: The article you are about to read is almost 100% opinion. This means it is in no way supposed to represent artist of any legendary status. It is purely to get the ol' juices flowing. If you disagree or have a band you think should be in RB please comment (I love finding new bands) or make your own blog.

As of this week Rock Band DLC is 1000 songs strong. 1000 songs! That means that, arguably, Rock Band has the largest library of official downloadable content for any game to date. And it is fitting that it would be a music game simply because there are so many bands and so many varied taste. And Harmonix has done their best to include all the good ones. From the 1960's British Invasion to unintelligible nonmelodic death metal it's hard to find many taste unrepresented in Rock Band's ever growing music store.

Or is it? That's the question I asked myself at work the other night. In a possible slip of sanity I challenged myself saying "I bet you could come up with 100 artist easily who deserve the Rock Band treatment." I accept your challenge! I whipped out the iPhone, went to Notes, and feverishly began punching in bands. The first 50 were easy, the last 50 required me to dig deep into my library and to think beyond bands I like. Who really deserves the official translation from our iPods to our video games? Not just who I want. 2 days later I shuffled it up, made some nifty headers, and here we are.

Fictional death metal band Dethklok has a level of fame that is anything but. Led by real life guitarist/singer Brendan Small the band is notorious for it's show, Metalocalypse, which stars the alter ego's of Small and fellow show creator Tommy Blacha. Dethklok has amassed a large following and is currently the highest charted death metal band reaching 21 on Billboard's Top 100.

Amy Winehouse is fucking crazy. She talks to the dead, spends more money than God on Christmas decorations, and believes to this day that she can bring back the beehive hair look. However, shit on Winehouse as much as you want, there's a reason the crackwhore has so much money off of only two albums. The bitch is good. It's not easy making money off of a dead genre like soul but she's managed to do it. So for that she deserves all the praise in the world. For that hair she deserves all the criticisms.

Take Lamb of God, mix in some Judas Priest, and you've got 3 Inches of Blood. It's a combination of two genres that have done wonderfully in Rock Band before. Why not again?


Not to mention...Destroy the Orcs, Ride, Darkhorse, Ride, and Trial of Champions

I really don't think there's much to say here because if you disagree here you simply need to get out. Daft Punk struck in the era of house music with the release of their album, Homework, in 1993. Combining robotic vocals, funky riffs, and odd hooks Daft Punk has and will remain our robot overlords for many days to come. All hail technologic.


Not to mention...Technologic, Around the World, and Aerodynamic

Genre: Rock and roll
Formation: 1951
Trivia: Chuck Berry has a degree in Cosmetology. These are facts people.

Now the naysayers would argue that Chuck Berry masters don't exist. NAYSAYERS BE DAMNED! Chuck Berry has not only recorded his songs multiple times but the man is still an active musician who tours and stuff. Soo...re-recording anyone?

Genre: New wave
Formation: 2004
Trivia: New Young Pony Club's debut (and so far only) album Fantastic Playroom was nominated for the Mercury Music Prize but lost to the Klaxons.

Fantastic Playroom is easily one of the best albums I've ever heard. Every song on it is infectious, dance-y, and beautifully composed with just enough wave, rave, and dance. I can not praise NYPC enough. You guys need to hurry up and get that second album out.


Not to mention...The Bomb, Jerk Me, and Tight Fit

We've seen a huge amount of grunge from Harmonix. From Pearl Jam to Screaming Trees. Well here I am to throw another band into the ring: Seven Year Bitch. 7YB is an all-female grunge band formed in Seattle during the hotbed of the grunge era. In 1992 guitarist Stefanie Sargent died of a heroin overdose and was replaced by friend Lisa Faye Beatty. The band enjoyed a mild success until their break-up in 1997 due to geographical distances between the members. Bassist Elizabeth Davis went on to join Von Iva. You don't know Von Iva? You seen Yes Man? Remember that band? Yeah it's a real band. Crazy, right?


Not to mention...Dead Men Don't Rape, Kiss My Ass Goodbye, and The Scratch

Genre: Blues rock
Formation: 1962
Trivia: Up until House of the Rising The Beatles were the only British band to have a #1 hit single in America.

We've gotten The Zombies and now I think it's time to shine a light on The Animals. If you don't know The Animals were a 60's British Invasion band who popularized House of the Rising (yes even before Dylan), created one of the first really badass music videos, and are also credited with being one of the first Darkwave bands, a genre that would blossom in the 80s thanks to Gary Numan, Culture Club, and the like. The UK has always been one of the capitals of international inspiration. From the British Invasion to the New Wave of British Heavy Metal to the most recent resurgence of new wave (or as the kids are calling it now new rave) and antifolk. The Animals were one of the first, one of the best, and easily deserve the RB treatment.


Not to mention...We Gotta Get Out of This Place and It's My Life

Genre: Folk
Formation: 1941
Trivia: In the film I'm Not There, an artsy look at the many faces of Bob Dylan, the woman who plays Joan Baez's equivalent is Sonic Youth bassist and all around amazing human being Kim Gordon. Yeah, that's all I got.

Baez and Dylan are best known for bringing folk into the mainstream and while one would go on to create for himself a cult of personality Joan Baez chose a different path. She has been, and still is, something of a quiet thunder in the folk scene. She's immensely successful and has continued the old school tradition of artist of old . She's won Grammy's left and right, tours to this day, and is an active protester. Yet unlike her counterpart Dylan she's never been one to throw a lot of talk out there. She's a doer. She's not about complexity but rather just good music.


[b]Not to mention...Farewell, Angelina, Silver Dagger, and House of the Rising Sun

Genre: Synthpop/Chiptune
Formation: 2009
Trivia: La Roux is not the stage name of singer/songwriter Elly Jackson who leads the vocals. La Roux is actually a duo of longtime friends Elly Jackson and Ben Langmaid.

You see my blog banner? That's Elly Jackson, vocalist of La Roux, and she is the shit. I figured I'd include this in the first 10 and get it out of the way. Now I could gush on and on about how amazing La Roux is and how Elly Jackson is a goddess but who wants to hear that? So I'll keep my praise brief. Elly Jackson, former folk artist, joined up with buddy Ben Langmaid and made a duo who debuted this year. Their debut album La Roux has been a hit in the UK winning them tons of recognition, a huge respect in the eyes of the press, and a Mercury Award nomination. La Roux (and synthpop in general) is, as far as I give a shit, the next big thing. And I gotta say I dig the recent resurgence of La Roux/Lady Gaga style synthpop more than the grunge-y Nickelback style of pop we're used to.


Not to mention...In for the Kill, Quicksand, and Colourless Colour

Now I've got 90 more artist lined up but I'm more curious about this: What bands who have gotten absolutely no love from Harmonix do you guys wanna see?
#Community
Login to vote this up!