8:09 PM on 09.24.2009 (server time)    0
Even though this game has a pretty robust Wikipedia article it remained forgotten to me until just a few days ago. So even though I've already done a Monthly Musing, I just had to share this little gem with you guys.

Let me begin with one a quote with one of my favorite PC games from the 90's: "And now, VWBT is proud to present the show that squashes reality like a bug. That's right! You better be ready to MegaRace! Annnnd here's your mega-host, Lance Boyle!"

The word mega-host should tip you off about the level of camp in this game. For those of you who don't know, MegaRace is an on rails driving/shooting game that was released in '94 for PC and Sega CD. You, the Enforcer, are a contestant on the virtual reality TV show, MegaRace. You race against virtual speed-gangs on futuristic tracks and the goal is to either pass or destroy all the enemy cars before you finish 3 laps.

When you finish a level, you get access to that gangs' car. Each car has different handling, armor, and weapons so you can choose whichever one fits your playing style. The levels take you to the hills of future San Francisco (New San), an underwater level, some industrial levels in space, and even to the twisting inside of a particle accelerator. 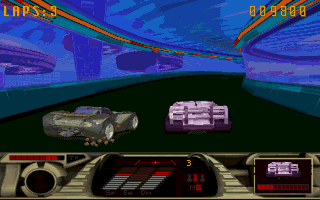 For the record, the particle accelerator level was pretty hard. I'd always seem to get second place.

Scattered on the surface of the tracks are different icons that represent either power ups or power downs. Some increase your ammo capacity while others reverse your controls for a few seconds. The worst one was on the "last chance" Tokyo track. One of the icons takes your weapons away completely, making it so you can only ram or pass the other cars to destroy them. Hitting that icon was like instant death. It was practically impossible to win without your weapons.

But all those things are secondary to the best/worst aspect of this game. That's right I'm talking about the one, the only....Laaaaance Boyle!

To this day, I can still remember some of his catch phrases and inflections. Portrayed by actor Christian Erickson, Lance Boyle was an over the top, snarky, and ultimately cheesy game show host who delivered terrible one-liners. What's hilarious is that the actor returned to "reprise his role" for the 2 sequels. ('96 and '01 respectively) I mean the guy was in a few other video games but if I hadn't seen that on Wikipedia, I wouldn't have known him other than the MegaRace guy.

Seriously. While I was writing this I went and watched the intro video on YouTube. The guy's over the top B-grade acting skills fit the game's aesthetic perfectly. They kinda suck. And looking back, so does the game. I'm pretty sure most of my perceived enjoyment of the game is coming from a pretty hardcore pair of retro goggles. Still my brothers, my dad, and I all spent hours playing this game back on our Windows 3.x computer.

One of the saddest days for me was when I found the old CD a few years after we stopped playing it. I installed it, but the disc was scratched so all the video sequences stuttered. Lance's dialogue came out worse than Porky Pig. However, apparently the game is up on Good Old Games.

The bad graphics, pretty bad gameplay, and awesome (read terrible) host clearly cement this game's place among the legions of forgotten games. As much as I may have loved MegaRace back then, I don't think I could sit through this type of stuff again to replay it.

Skip about a more than a minute to see the Lancey goodness. Photoshop skills by Cadtalfryn
#Community    #OpinionEditorial
Login to vote this up!