12:01 PM on 09.14.2009 (server time)    0
Hello all, welcome to my first blog. I assume many people post pictures of their collections, setups, etc. However, of the many random things I do own not one of them is a digital camera. I'll have to get on with that, and it'll be around at some point. However, another momentous occasion for me happened recently, and as I've been frequenting this site at an almost obsessive rate it seemed as good a time as any.

It's fair to say I grew up within the world of video games. I wasn't by any means a total loner, but as I lived across the tracks ,so to speak, I found myself distanced from a lot of the friends I wanted to hang out with. Systems like the NES, Sega Genesis, and Super Nintendo provided a form of escapism that provided a much richer experience, than my rural east Texas surroundings. all back woods and southern baptists, both of which aren't exactly my cup of tea.

The above image is one in particular that has been seared in my mind since those days in rural middle America. I spent countless hours fighting the demonic jaquio's evil hordes. Many, many, frustrated hours cursing flying ninjas, and practically frothing at the mouth when my ryu would fall into one of many cruel enemy juggles.

As a nine year old I simply did not have the capacity to deal with the evil tecmo developers cruel tricks. However, the more frustrated i became the more I felt compelled to return again, and again, to the universe of Ninja Gaiden, and allow myself to get shit canned all over again. It was a vicious cycle, but it's one that cemented in the fact that I was developing a passion for these things called video games that was more than a passing fling. The pinnacle of this experience, as a child, was finally reaching the masked devil, only to be obliterated in what was probably less than 30 seconds. The shock of being sent back to 6-1 sent me into a fit of actual rage, and sent my controller flying at the screen.

Fast Forward to today. I recently was in one of my oh my god I need a q-tip fits, and while searching my new house I moved in I found a closet I hadn't noticed before. My curiosity was peaked, and the first thing i see when i open the door is a large plastic container, and the game facing me through the plastic was none other than Ninja Gaiden. As soon as my room mates got back I asked them about the box, and shortly there after we were on our way.

First thing was first though. We needed a konami code run through on contra, which was a breeze even after all these years.

The next order of the day was a return to the scourge of my childhood. It's pretty amazing how much a person can retain over ten years as I flew through the first four acts without losing a life, but it was after Bloody Malth that once again frustration began to settle in. Controllers didn't fly as much this time around, but it was here years later that I began to truly understand the logic in Ninja Gaiden. Anticipating enemy attacks, ways to fly through situations unscathed, and developing actual strategies. It might not be entirely accurate, but in this sense Ninja Gaiden essentially becomes a strange hybrid action/platformer/strategy game with the added spice of puzzle elements. Every screen is really just a large puzzle, and every enemy encounter has a certain solution. In this sense, the genius of the developers really shines through, rather than the challenge being a result of bad game design.

Jaquio deserves special mention as he is probably one of the most difficult bosses I've ever encountered, and that statement goes across all platforms to date.

My first Ninja Gaiden completion was not a clean one. I spent many frustrating continues back at 6-1, but determined after all these years to get the job done. However, with persistence comes success, and eventually even the demon itself fell under my sword. Something about completing a game of this difficulty that I had spent many hours of my youth playing came with a strange sense of real accomplishment. The ending accompanied by a real satisfaction, and some unfortunate and hilarious female objectification. 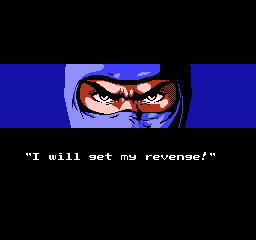 #Community    #IAMDRUNK
Login to vote this up!