As wonderful an experience as PAX was, something was missing. Going to Seattle, I knew, in my heart of hearts, I was gonna be able to sink my teeth into news about the 3rd installment of my favorite downloadable series, On The Rain-Slick Precipice of Darkness. This ingenious and funny RPG created by the Penny Arcade guys has delighted me for hours on end, with both episode 1 and 2 holding some of the best turn-based battles and enjoyable scenarios I’ve ever played. Not hearing anything about Ep. 3 made me a sad panda, to be sure. But, going to PAX, I decided to go back and play Ep. 1, in preparation for the news that never came. In doing that, I was reminded of one of the strangest levels I’ve ever witnessed in an RPG: the festival-like, mime-infested Pelican Bay. 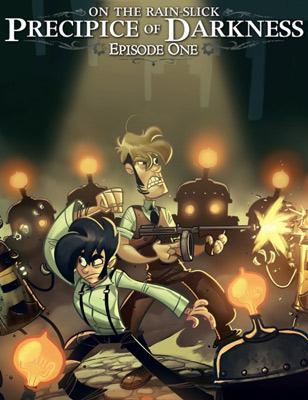 Pelican Bay, much like the boardwalks of your youth, contains everything for an enjoyable summer afternoon: mimes, barbershop quartets, games of chance, popcorn, and cults trying to release an ancient unspeakable horror onto the land. This level opens up about 1/3rd through the game, while you, Gabe, and Tycho are on the hunt for the Fruit Fucker that destroyed your house (God I love this plot). The area begins with a visit to the shop of the odd-doesn't-even-begin-to-describe-him Mr. Swindell. Navigate some of the strangest in the dialogue in the game, and give Swindell your ticket, to gain access to the boardwalk.

Making your way through the opening gate, you come in contact with a mime scientist. He tells you that he was once under the control of some sort of mime cult, who has now confiscated some of his invisible mime items. Guess who has to find that shit? Well, you do, and that means walking through the gorgeously-drawn boardwalk doing everything from playing carnival games, collecting prize tokens, and fighting, fighting, fighting. You basically carve your way through swarms of clowns, singing quartets, and the aforementioned evil mimes. The best part about these enemies are their attacks; the clowns toss their over-sized red boots at you with an attack called Bop Shoe Bop, the quartet fights using their vast vocal skills, and the mimes attempt to, well, MIME you to death.

As you progress through the level, you eventually come into contact with the Necrowombicon, the book that turned all these mimes into religious zealots, obeying the will of some great being known as The Silent One (see where this is going?). Eventually you get the mime scientist's parts back for him, and learn that, to save the world, you have to battle the as-yet-unseen Silent One, who is looking to come into this world and rule with a giant, unspeaking hand. Through determination and battling the higher-ups in the mimes evil cult cabal, the final boss battle comes. You go face to face, tentacle to rake, against The Silent One; a statue…possessed by Cthulu…in a mime outfit. Yeah.

Now, I'd rather not spoil the final fight, as it's not only the final of the episode, but one of the better ones I've fought in so far. Just know; it's awesome. If you're a fan of RPGs or what Gabe and Tycho do in general, you fucking OWE it to yourself to pick this (and Ep. 2) up, and enjoy pure, hilarious bliss. Then, you can join me while I wait for news about Ep. 3.