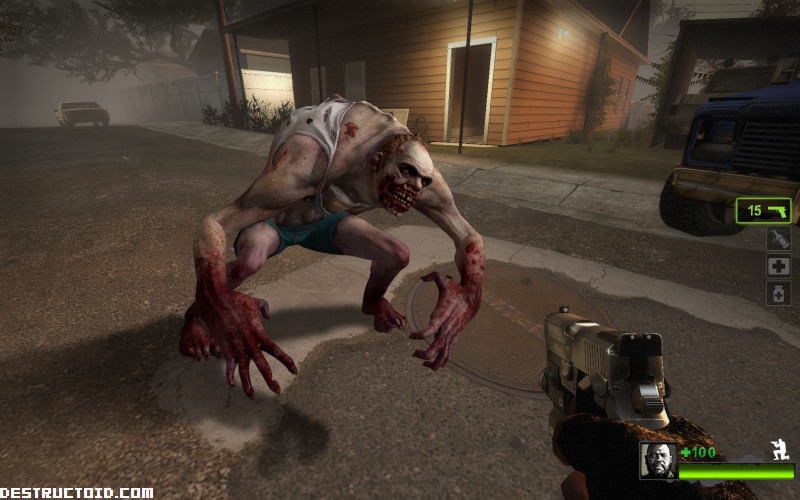 Jockey, as well as some of the new weapons, melee and otherwise.

The biggest thing I took from playing as the new Survivors (dibs on Rochelle, by the way) is that playing as the Infected in Left 4 Dead 2 is going to absolutely be the highlight of the game for me. Whereas playing as Left 4 Dead 1's Infected resulted in a similar strategy at all times (one person vomits, two Hunters jump in, one Smoker pulls somebody away), the sheer number of different combinations will certainly shake things up a bit. I did observe, however, that each of the new special Infected plays pretty similarly to one of the existing special Infected, although the outcomes are different. The Charger plays much like the Tank, where he gets into the fray, knocking Survivors down, although he can be taken out much more easily than the Tank. The Spitter plays a lot like the Smoker in that she is typically most effective staying far from the Survivors and sniping her acid at them while remaining safe herself. Finally, the newly revealed Jockey plays like the Hunter in that he jumps on top of the Survivors, but he is much more difficult to dispatch, as he doesn't provide a stationary target once he snatches a Survivor.

I don't believe it is any coincidence that each of the new special Infected have a similar silhouette to their L4D1 counterpart. The Charger is big in all dimensions like the Tank, the Spitter is taller than normal Infected, and skinny, just like the Smoker, and the Jockey crawls around on the ground like the Hunter.

Of course, they are definitely different enough that they justify their existence. The Charger appears to move about as quickly as a Tank, until he activates his charge, which is a superfast linear boost that will latch onto one Survivor and temporarily knock over any others nearby. When he comes to a stop, he will slam the Survivor into the ground repeatedly, but again, he goes down after just a few seconds of sustained fire--and probably even less if the team is working together.

Over the three times I played the level, I never felt particularly threatened by the Spitter. I saw her a few times, and killed her without much incident. To be fair, she only ever seemed to show up when there weren't other special Infected around, and I can imagine that pairing her with any of the others would make her attack much more formidable. She is very easy to pick out from a distance, not only because she stands taller than most Infected, but because the acid she uses for her projectile attack glows a bright green, and is constantly surrounding her, much like the Smoker's dark green smoke. I can only imagine her acid attack (which acts like when Chad throws a molotov at your party's feet) paired with some well-timed Boomer bile could be potentially devastating.

The Jockey doesn't appear to be able to jump as high or far as a Hunter, and I don't believe he can do any initial pounce damage, but should he hop on a Survivor's back, he can somewhat control the human's movement. It almost works as a combination of the Hunter and the Smoker, in that he has to risk himself getting near the Survivors, but he allows the Infected another method for physically separating Survivors. He was definitely the biggest threat in the PAX demo, but it was largely due to the fact that our teams were made up of random people who could hardly communicate with one another, so by the time one person realized there was a Jockey on somebody's back, he had run him halfway across the map, down a mountainside, and into a swamp. Luckily, it appears as though he does not remain on top of a Survivor after he incapacitates the Survivor, so the downed player can get revenge if he is quick enough, and his teammates can usually come help in time. While the Jockey is on a Survivor's back, the Survivor can slow the Jockey's movement control, but as far as I could tell, could not do anything about actually stopping it.

One final general note on the Infected: since this preview took place on the loud PAX show floor, I couldn't really make out any of the new special Infected sounds, so it is entirely possible that in a more controlled environment, with a team who communicates, they will likely be much easier to counter than we found.

I realize I have spent a pretty fair amount of focus on the new Infected, but there were also some noteworthy things to mention about the Survivor side of things. I did not come across any incendiary ammunition, but I did observe equipment that I was not aware of beforehand. There now exist little pickups such as laser sights to improve accuracy. The effect is marginal, but it looks cool and is a neat touch.

The melee weapons take the place of the player's pistol, so a decision must be made between carrying a sidearm or a melee weapon, and it isn't a particularly easy choice to make. Of course, there is a friggin' katana in the game, so should that ever come up, the choice becomes infinitely easier. Other melee weapons of note are a guitar and a possible-Half-Life-homage red crowbar. I was asked what the player does if he is incapacitated while carrying a melee weapon rather than a pistol, but it never came up, either for me or anybody I watched, so I couldn't answer that definitively.

Lastly, the shooty weapons. Some of the old guns were present (my L4D1 favorite, the hunting rifle, was there for me to use), but there were several new guns as well. The starting weapons are similar to the old pump shotgun and uzi, but I also came across an AK47, which was about as powerful as the M16, but predictably less accurate. Even later, we came across an alternative to the hunting rifle, which appeared to be a G3 with a scope on it. It functioned similarly, but felt a bit more sluggish, and didn't produce nearly as satisfying a bang when fired. And finally, there now exists a grenade launcher, which is totally awesome. It only holds one grenade at a time (with another thirty in your incorporeal ammo pockets), but it lets the player pretty accurately place explosives, both spatially and temporally, so I can imagine it being an invaluable tool for a skilled team.

It's funny to think that I almost didn't even play Left 4 Dead 2 on the show floor, since I felt like I already knew what to expect. And truthfully, I got pretty much what I expected, but I am glad I took the time to really get to know that one level of Dark Carnival. I'm now looking forward to this game more than ever. And you probably should be too, so when it finally does release, we can play together.
#Community    #Xbox360
Login to vote this up!