My younger sister has been addicted to Art Style: Rotohex lately. A lot of the guys I know seem to think that girls don't play games, but from my perspective, they play plenty of games. My sister (and my girlfriend both) play lots of RPGs, and my sister's puzzle game addiction has gone from Tetris to Frenzic to Planet Puzzle League. And for the past two nights, she's been playing Rotohex for hours straight. 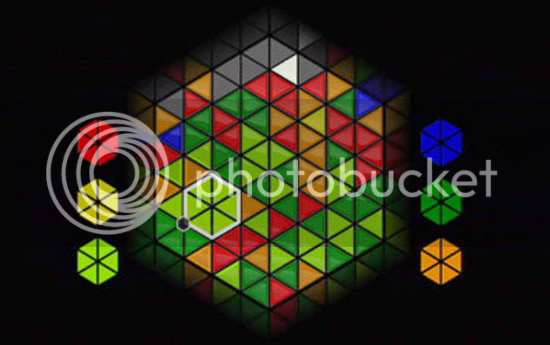 The day before, I had spilled some soda on one of my Wiimotes, and so I was wiping it off again with some Windex to make it less sticky while she was playing Sprint mode on Rotohex. At that moment, we discovered that Sprint mode can be played co-op. As I cleaned the remote, I had accidentally pressed a button, turned it on, and I now had a cursor on the screen.

Growing up together, my sister and I were no strangers to co-op play. We played Sonic 2 and Sonic 3 & Knuckles together on the Sega Genesis, and she always preferred playing as Tails. There was something amusing to her about being able to continually die, and just have the game bring her back. She could quite literally fight boss battles for me, since she'd never really die. As a kid, I always had to call her over to help me play the special stages in Sonic 2. Our room has two pairs of Sonic and Tails figurines, and we even planned on getting Sonic and Tails tattoos together.

And even now, after hitting a controller on accident, we find ourselves playing games together. She had been stuck on Rotohex's 5-color Sprint Mode for hours, but playing together, we made it all the way through 8-color. And the whole time, we were working together. Or at least we were trying to; calling out which color we were going for so as not to wreck each other up, or moving a piece from one side to another so the other person could get that last piece they needed. 8-color mode took quite a few tries, but it we finally beat it before the end of the night.

It felt good for my sister and I to be playing games together again. We haven't done it in a long time, and to be honest, it probably won't happen again for a while. My sister is getting married in less than a week, and she's moving out really soon. I'm going to miss playing games with her. I have my girlfriend to play co-op with, but it's really not the same. She loves Pokemon and the Sims. My girlfriend isn't the kind of person who would play Power Stone 2 or Marvel vs. Capcom 2 with me. She won't stay up through the night trying to finish Skies of Arcadia. She's a great girl, but she's not my Player 2. Not like my sister is. And so this week, we close out an era of my life's local multiplayer.