Five Reasons To Be Pumped About Aliens vs. Predator

If news of the upcoming Riddley Scott-directed Alien prequel and Robert Rodriguez-produced Predator sequel is any indication, Aliens and Predators will be taking some time off from appearing together on the silver screen. Luckily, in the videogame world, the Alien v Predator formula is dug in like an Alabama tick, and the two species still appear plenty mad at each other in previews of Rebellion�s face-hugging, triangle-laser...pointing FPS. The February 2010 slated Aliens vs. Predator is by all indications shaping up to be incredible, but for those few who remain skeptical about it�s inevitable awesomeness, I�ll list five reasons why this game has at least me sexually excited.

1. Rebellion is incapable of making a bad AvP game. To quote Jesus, �The only reason anyone had to own a PC 10 years ago was to play AvP.� I�d personally go so far as to say it was the best adaptation either franchise has had to a videogame. So why should we expect anything different from Rebellion�s latest endeavor? They�re also throwing in a lot of never-before-implemented ideas that couldn�t be used in the original games due to hardware limitations of the time. And although the plot does involve a Predator-built pyramid stuffed with Aliens (ala the first AVP movie), Rebellion insists that the game is not based on the smelly AvP films and is instead inspired by the classic Alien, Aliens, and Predator movies in addition to the Dark Horse comic books. So chill, Predator won�t be falling in love with any strong, female protagonists. The guys from Rebellion are swimming in their element here; we should expect a game that�s respectable at worst. 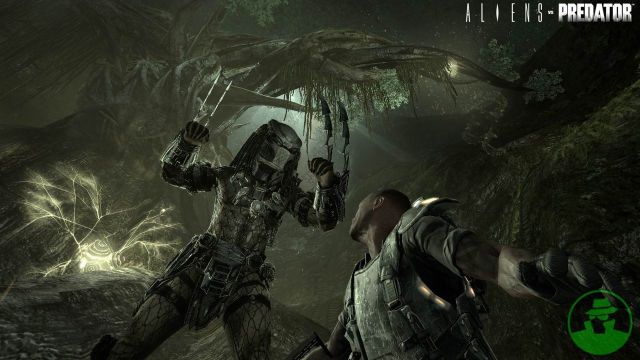 2. Over here�turn around. We all know that Preds can rip out the spinal columns and skulls of marines now, but let�s put that on the back burner and discuss the feature that, upon learning of it�s existence, made me squeal like I was auditioning for Ned Beatty�s role in Deliverance. The Predator�s helmet zoom apparently doubles as a directional mic that lets you eavesdrop on marine conversations and even record them so that they can be later replayed to provide distractions. I think it�s better that I get my hopes down and assume such an amazing mechanic will be restricted to the canned dialog from the single player campaign (which is still cool), but I can�t help but imagine how huge this would be if it were implemented in multiplayer. Imagine recording the angry tirade of some marine player calling his squad mate a �f*cking noob� over XBL, sneaking up on him all invisible-like, then replaying a distorted version of his own mumbley nerd voice back at him before stabbing him in the eye. Holy Jeez, I�m gonna have me some fun�gonna have me some fun.

3. It's Safe To Assume The New AvP Multiplayer Will Fix the Economy. Now, I love Call of Duty and Battlefield, but something tells me that by 2010 I�ll have had my fill of the same old military-themed competitive FPS scene. After spending all last year trying to land headshots on Nazis with my M1 Garant, leaping from a shadowy ceiling onto some unsuspecting Marine and chewing his face off sounds pretty dang refreshing. And if the assortment of match options from AvP1 and 2 are any indication, we should see some good variety of online modes to keep things from growing stale. So far, they�ve confirmed that they�re bringing back the co-operative, 4-man survivor mode (basically horde mode) and will have 18-person multiplayer with two-way and three-way species battles. I haven�t heard anything about the return of Alien or Predator-Tag yet�crossing my fingers pretty damn hard. 4. Welcome to the MF-ing Jungle. I�ve waited my whole life for a game to capture the feel of the first Predator movie. And although Rebellion�s game probably won�t boast the genius one-liners or the governor-studded cast that helped make the original film so ludicrously amazing, it�s the first videogame I know of, save for Predator on the NES, to put that ugly mother f*cker back in the environment where we all fell in love with him.

Shown off in the video at E3 was, yes, a jungley-looking level. So get ready for the muf*ckin� jungle to come to life and take him ("him" being whoever isn�t playing as the Predator character at that particular moment). Seeing as this game will place so much emphasis on stealth, having an outdoor environment where you can hide behind brush or above in the trees will be nice change from the dank, Alien-movie inspired corridors we're sure to see. When I start my first game of Pred Tag in this level (please have Pred-Tag), I�ll be spitting Predator quotes like Blaine with a lip packed full of Big Chief. "There's something out there waiting for us, and it ain't no man. We're all gonna die." 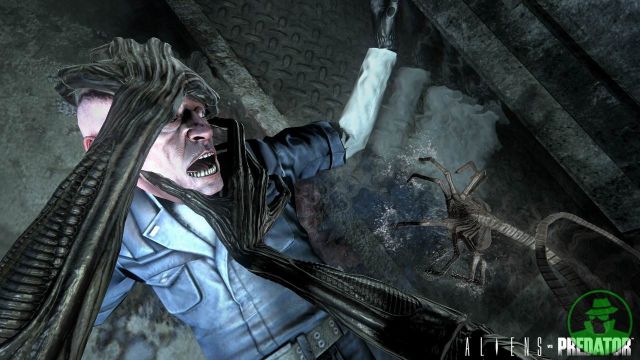 5. I think someone need a hug. Let�s face it, the facehugger to chestbuster birth-cycle is probably the most horrifying/intriguing feature of the xenomorph species, and when this is properly implemented in a game, it can add gameplay depth and a real feeling of source material authenticity. In the Alien campaign demo shown off at gamescon 2009, it was established that players would be tasked with harvesting (via-facehugger) live human civilians to produce more xenomorphs. I�m hoping we�ll see some AvP2-style first-person alien life-cycle stuff, or even some AvP: Extinction-style mechanic allowing you to build up your horde. But catching humans alive might prove difficult according to this blurb from videogamer.com, �In a graphic scene during our gameplay presentation, a civilian locked himself in a room, found a gun and shot himself in the head just as the Alien had managed to pry the door open.� God damn! I�m guessing the game will include a couple of moments that are meant to recapture those unforgettably disturbing movie scenes, like the one in Aliens where the cocooned survivor asks the marines to kill her right before the chestbuster shreds through her abdomen�that scene gave me serious nightmares when I was little. "What's the matter man, the food ain't THAT bad?!"

The years 2010 and 2011 are shaping up to be a renaissance for fans of the Aliens and Predator franchises. In addition to Rebellion�s new game and two promising looking movies, we�ll be seeing Aliens: Colonial Marines likely within a year of AvP�s release, and SEGA still plans to make good on their pledge to make three games based in the Aliens license, i.e., the death of the Aliens RPG begets a new, still-unannounced Aliens title.

I recommend that you all rewatch the original Alien and Predator flicks sometime before February. Aliens vs. Predator is shaping up to be tremendous, and I don�t care if you bleed molecular acid, green Glow-Stick juice, or you ain�t got time to bleed, if you're a fan of the original movies or FPSs, you need to keep this game on your radar; it�s scurrying its way through the vents and will be raping your face before you know it.
#Community
Login to vote this up!