10 Things I learned this week: I'm bringing it back Edition 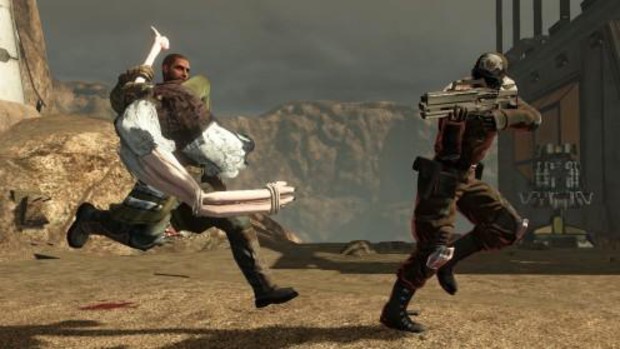 That's right I am bringing RFG back. I know Blehman was considering doing it this FNF but fuck that shit. They will probably just end up playing L4D like a bunch of hippies and I am not going to be available to kickass on Friday. So 10 PM EST this Saturday I will be hosting Some Red Faction. If you have the balls you will see me there. If not, I will probably just end up playing MVC2 with Debloo anyway. Bitch, I want to kick ass with the Rhino pack.

1. I am now getting a PS3. I have said that before but I actually intend to do so now. I have been waiting awhile for it to drop into my price range and now I think I can finally afford it. Surprisingly, It wasn't the price cut that has made me come to this decision. It is the announcement of the PS3 slim. One of the things that turned me off of the PS3 was its size and shape and the slim.

2. Prototype is infuriating. It's a pity, because the core gameplay is really fun but lengthy animations, boring side missions and really fucking irritating enemies has made this by far the most irritating game I have played this year. What really pisses me off is that every mistake it makes is something some other previous open world game did and them not fucking fixing or removing those pieces of gameplay nobody fucking likes. Like the fucking minigames and lengthy animations required to get into a fuckng vehicle. Mercenaries made this mistake a year ago and every magazine and website tore into it for that. But did the Prototype devs listen? No. This is why I don't like open world games too much, I always get dissapointed in the final product.

4. Juggsy is back! Huzza! That makes me a happy panda.

5. Turtles in time Reshelled is a bit shit. Which saddens me, it seems that everything with the TMNT name on it now is shit. I will stick to the original thank you very much.

6. Battlefield 1943 is boring as shit. Maybe it was because there were only like 4 people playing with me in the demo but either way I am not impressed.

7. It is painful having all these XBLA games coming out. I only have so much money and since the prices for them has gone up it is really difficult making a decision. Bah, at least I scratched Battlefield 1942 off that list.

8. Apparently Unstoppable Juggernaut and Ron Workman are the same person.

9. Apparently Samit is a pooping Penguin.

10. I missed another round of joke blogs. Goddamn it, why am I never around when everybody decides to do something silly?
#Community
Login to vote this up!