9:16 PM on 08.15.2009 (server time)    0
In the very first edition of Overrated/Underrated, I'd like to take a look at two games of the same narrative genre; the crime drama. Ever since the genre's early beginnings in film, the crime drama has earned incredible amounts of respect for the ways it approaches characters, themes, and general storytelling, with films like The Godfather and even present day offerings like The Departed being prime examples of how these story arcs operate; they examine humanity at the most basic level. Life or death. Prosperity or poverty. Family or friends. The genre juxtaposes these themes with tough guy dialogue that's sharp enough to cut through even the thickest cynics and violence that's brutal enough to make a stone wince. Obviously, videogames were quick to jump on board and give the genre a try. The result is a mixed bag; so much so, that I have decided to dedicate the first episode of O/U to two recent games in particular: Grand Theft Auto IV and Kane & Lynch: Dead Men. Hopefully, this article will be an offer you can't refuse; let's get into it.


WARNING: There will be spoilers in the discussion. You have been warned. 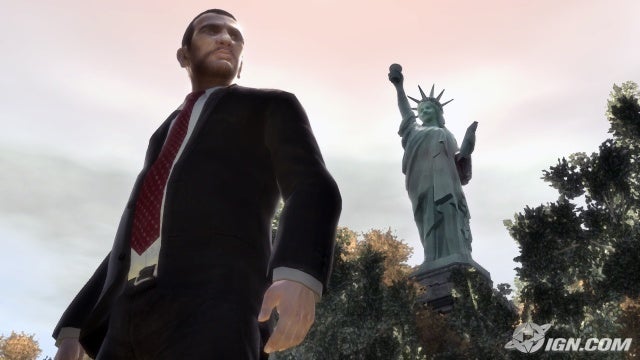 In 2008, this game caused quite the stir with both consumers and critics, with both sides of the fence resonating with incredible amounts of enthusiasm. Never before had the series had so much acclaim for narrative prowess, with many reviewers calling the script "Oscar Caliber", which is criminally hyperbolic to say the least. The script in Grand Theft Auto IV is clever, well-written, and often pretty funny, but it's not worthy of an Oscar. More often than not, the game's narrative is deafened by how scatter shot the tone is; one moment you execute a mob boss and have your cousin kidnapped, and suddenly you're greeted by a comedic radio commercial or news break that's so obvious in it's politics that it might as well wear a bumper sticker. Speaking of which, Grand Theft Auto and subtlety aren't exactly a match made in heaven. Whenever prompted (or not prompted), Niko will spill out his war stories to people who don't even ask about it (Mob boss wives, cousins, Jamaicans) like a delusional old man. Thankfully the game doesn't add cinematic flashbacks, but it seems like the writers were itching to give a reason as to why Niko is such a cold man who kills without a second thought.

Speaking of murder, there are incredible plot holes in the story that you can almost fit a jet through. For instance, early in the game, Niko kills a underling mob boss for supposedly sleeping with his cousin Roman's "girlfriend". First of all, he does this is a relatively populated are of town (In the scene, you can see cars driving in the back) and in broad daylight. He then takes his sweet time dragging him into the river to dispose of the body. Why is there no repercussions whatsoever for his actions? It's obvious that people know he killed him, after all, not an hour later, he and Roman are kidnapped by the upper boss, who knows that he killed the man. How do they know? If they know, why don't the cops? Why doesn't anyone else? None of this is explained at all. Secondly, since when are Roman and Mallorie going out? In the scenes at the Depot, it's obvious that he is trying to whoo her and obviously failing at it. She's obviously not attracted to him in any way, which makes you wonder, when the hell did they start going out? Also, if they were going out, why would Mallorie sleep with the Depot boss? Did he threaten her? Did she do it to get a better position at the Cab Depot? If so, what position would she even get to; the only jobs available at the Depot are answering phones, which she already does, and driving cabs. None of this is explained at all, and not a second thought is given to the relationship.

Speaking of relationships, Niko has the opportunity to have not one, but two girlfriends throughout the game. The first (whose name I don't recall) turns out to be an undercover cop (or something, her role isn't ever really explained beyond who she works for) and the second is Kate McReary, the sister of his friend Packie. Kate plays such a small role in the story, that when she eventually bites the dust in the end (given that you kill Demetri in the end), you couldn't care less. She has no personality because shes given next to no screen time, you constantly wonder why shes so immediately attracted to Niko to begin with, especially considering she knows what a criminal he is, and in the end, she's just there to be placed in peril so that Niko can either save her or let her die. Either way, she's a completely uninteresting, underdeveloped character. The other people that populate Niko's list of friends are just as bland, with many of them having no motivation to be friends with Niko other than for the sake of convenience (Packie, Little Jacob, Dwayne, Playboy X, etc.). The exception in this case however is Brucie, a steroid junkie who provides almost every laugh there is to be had in the game. He's one of the only likable characters in the game and he remains the most interesting and entertaining character throughout.

All in all, Grand Theft Auto IV is overrated; it's characters are underdeveloped and unmemorable (Brucie however, is genetically different), it's themes are limp and obvious, and the so-called "choices" you make throughout the game have no effect upon anything whatsoever. The only one that matters is whether you want Kate or Roman to die. In the end, Grand Theft Auto IV fails to live up to the hype surrounding it. The elements for a great crime drama are all there: revenge, tenacity, good dialogue, an urban sprawl just waiting to be explored, and foreign accents. But the game refuses to utilize these things, instead sticking with tired old tropes that are hidden behind a glossy paint of promise.

In the world of Kane & Lynch: Dead Men, there are no good men. Kane is a traitor and a killer. Lynch is a maniac and a drug abuser. Crime Syndicates are the true leaders, manipulating seemingly everything behind a web of lies and laundered money. The only thing you can trust in the world is the bullets in your semi-automatic weapon, which you wear across yourself to show that you are a man. This is the setting for Kane & Lynch, and this is the world that will lead these men to their punishment, a punishment that prison and the promise of a pleasant death could not provide. From the opening scene, where Kane stumbles out of the wreckage of the vehicle that would ferry him to the valley of the damned, to the end, where Lynch suffers for Kane's poor leadership, it is a story filled with death, betrayal, and paranoia, themes are time-tested by the Crime Drama. This is why Kane & Lynch: Dead Men succeeds.

The character of Adam "Kane" Marcus is not a likable one. He isn't charismatic, charming, handsome, masculine, or attractive; his tired and rugged appearance displays the weight of guilt that he carries with him at all times. However, this brings up an important point; does a character have to be likable? No, but they to be interesting, and Kane is an incredibely interesting character. He's a man who has done wrong and been done wrong. He is a man who obviously cares about his friends and family, but will sacrifice his own friends to protect his daughter Jenny. He is a walking contradiction, but he's someone who we can all relate to in one way or another, whether it be how he constantly makes the same mistakes or how far he will go to see his ambitions fulfilled. He's sympathetic, but the game never needs to tell you that he is. They don't go the cheap route by giving him a vulnerable oaf of a cousin or an almost non-existent girlfriend; they give him a daughter who is repulsed by her father and ashamed of his actions. They give him a friend that can no longer trust himself, let alone others. James Seth Lynch is paranoid, bloodthirsty, and ruthless; the perfect foil to Kane's hidden, much more deep-seeded villainy. While Lynch is an agent of chaos, Kane is an agent of anger who is just patient enough to keep it inside.

Like Grand Theft Auto IV, a choice of what end game the player wants is given; in one scenario, Kane abandons Lynch and his friends to board a helicopter with Jenny, his daughter, and escape the battle he started. It's the cowards route, but the safer route for his daughter, who will hate him for doing such a vile thing. The other finds Kane staying to help his friends in the giant firefight. He fails to protect them, and they die regardless. Jenny is shot and killed, and Lynch is injured and losing blood fast. Kane carries both to a boat to escape the island, refusing to believe his daughter is dead. He and Lynch are cast into limbo, their fates uncertain and ambiguous. Either way, both Kane and Lynch are given their punishment due, with only death and cowardice awaiting them on either end. The entire game is just the player leading Kane to his ultimate demise, which is an incredibly gripping thought. You don't choose an ending, you choose a fate for a man guilty of a million sins.

Overall, Kane & Lynch: Dead Men is in incredible crime drama that chooses to surround itself in themes that the genre is built out of, yet manages to pull them off in ways that are both interesting and enthralling. It doesn't have the problems or plot holes that bite at Grand Theft Auto IV and tells a tale that is much more proficient at presenting its themes and solidifying its tone. It is a much more consistent narrative in both mood and pacing and deserves much more attention than it gets. All in all, Grand Theft Auto IV is overrated and Kane & Lynch: Dead Men is underrated.

That's it for this week's Overrated/Underrated. Thanks for reading, and if you have any suggestions for the topics of a future segment, include them in your comment!
#Community
Login to vote this up!