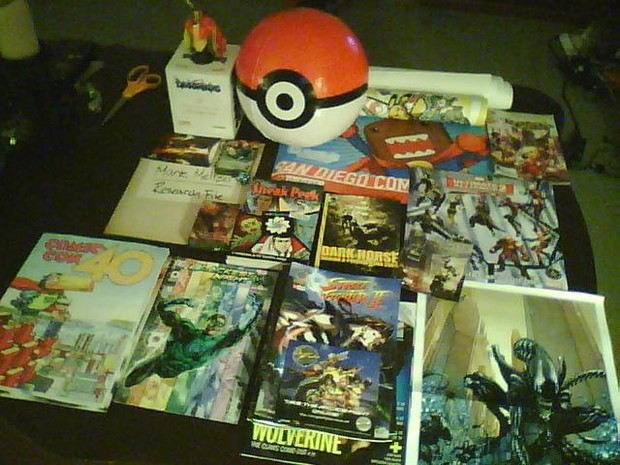 Alright, I am going to repost this for those who didn't see the original post and to those who might have forgotten. Come on people I only have two entries damn it. I'm either going to have to cut out part two of the contest or extend it.

Either way for those of you who don't know I am holding a contest for people to nab all my sweet Comic Con swag which includes:

So what must you do to get all this? Well, I had several ideas but I decided to go with the least demeaning. There will be two parts. The first part is this:

As everybody knows Marvel Vs. Capcom 2 is out on XBL and PSN and anybody who even remotely pays attention to my blog will know I love this game. So to celebrate it's rerelease here is what you have to do: you must write a blog detailing your ideal Comic/Videogame 3 man Tag Team. They don't have to be from Marvel or Capcom they can be whoever you want, however there must be at least one videogame or comic character on the lis so no teams of just videogame or comic characters. Keep in mind you must describe why you think they are the best, you can't just writ their names and post pictures. If you do post a blog that is just names and pictures with no content I will just ignore it. Other then that you can do whatever you want with it. When you are done writing it put Aborto's Ultimate Tag Team Contest (or AUTTC) so I can find it. I will choose my 3 favorites out of them a week from now and then those people will be Eligible for part 2.

Alright, now go out and do my bidding.
#Community
Login to vote this up!