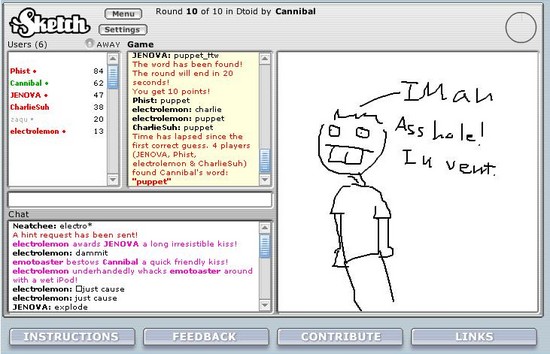 It's funny- even though the server was down for "the weekend", while it was down, many of us had no problem accessing Dtoid. And yet, when it came back up, a few people had MySQL errors left and right. Luckily, our dutiful robot overlords fixed the server issues and Dtoid's back & running in tiptop shape.

Tonight's Late Night Lulz™ might need a bit of a backstory, if you've never played iSketch. Basically, this photo was taken from the point of view of the person drawing the picture, in this case, Cannibal (Calvin). It's Pictionary, but everyone is notified when someone gets the right answer, but the competitors don't see the right answer until the timer is done. Anyway, if you get this picture already, you can skip the following paragraph, because it just cheapens the joke anyway.

Basically, Puppetpallmich is a long-time Dtoider who's been here for well over 3 years, and he's got a reputation for being sort of a... dick. So when Calvin's clue was "i'm an asshole in vent(rilo)" instantly, everyone playing knew that he was referring to Puppet, or in the case of the game, a puppet, since iSketch only deals in nouns. Get it? Got it? Great. It's not necessarily a new image, but it's funny, and a funny memory I have of time with the Dtoid community. Speaking of which, where the hell is Phist?

And now for something completely different.