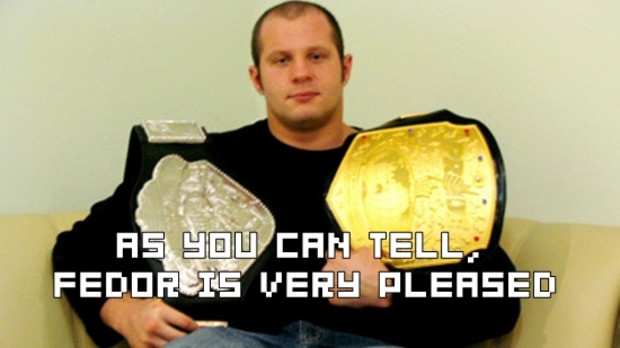 There has been a lot of doubt cast on the upcoming EA Sports MMA game (aptly titled EA Sports MMA) based upon a perceived lack of star power outside of the Ultimate Fighting Championship. However, you can't fault EA for it's cover athlete: Fedor Emelianenko, the #1 ranked heavyweight MMA fighter in the world. Boasting a record of 30-1 (with the one loss coming from years ago from a doctor's stoppage due to a cut), Emelianenko has beaten everyone from former UFC champions to outright freaks of nature (see: 7'2", 350+ lb. Hong Man Choi).

During a press conference today where most hardcore MMA fans were hoping a UFC deal would be announced or at least hinted at, Fedor was excited to announce that he would be the headlining athlete of EA Sports' first foray into the quickly growing sport of mixed martial arts. Other fighters mentioned officially today include Gegard Mousasi and Renato "Babalu" Sobral.

Of course, there's no fun without a bit of speculation, and there are many more fighters that have either individually announced their participation in the game, or are highly expected to be included. Those would include Randy Couture, Nick Diaz, Frank Shamrock, Tim Sylvia and Jason "Mayhem" Miller. Really, I don't see this as a failure-in-the-making like many do because of the lack of UFC license and fighters. After all, there are tons of great fighters outside of the UFC to bring in the hardcore MMA fans, and many casual fans will give this game a shot solely based on the EA Sports logo. If the gameplay is as tight as it is with the Fight Night series, THQ could be in for some serious competition.

And hey...competition is good for all of us, right? We all know how stagnant franchises can get when there is no competition...say, due to an exclusive licensing agreement.

By the way, Hong Man Choi is also know for being the man who beat Jose Canseco into the fetal position recently. Despite such a great feat, he is not known for his tremendous skill as a fighter, believe it or not. Full press release follows.

Electronic Arts Inc. (NASDAQ:ERTS), announced today that Fedor Emelianenko, the world�s top ranked* MMA heavyweight, will headline the EA SPORTS� MMA fighter roster. Emelianenko will be joined by Gegard Mousasi and Renato Sobral, both of whom will be featured in a title bout at the STRIKEFORCE fight on August 15, as the first of a long list of fighters who will appear in EA SPORTS MMA, the all-new mixed martial arts title coming in 2010.

"I have fought all over the world and I am excited to be in EA SPORTS MMA because this game is going to show the global appeal of mixed martial arts,� said Emelianenko. "I know MMA fans have been wanting to play as me and pitting me against any opponent. Now they will have their opportunity.�

Gegard Mousasi, a former Dream Middleweight champion, has a current record of 25-2-1 and won his last match in Dream 9 against Mark Hunt this past May. The 6�1�, 185 pound Dutch-Armenian fighter will be taking on Renato Sobral to determine STRIKEFORCE�s Light Heavyweight champion and has a fight style that is a unique blend of Dutch kickboxing and judo.

Sobral, hailing from Brazil, is known for his aggressive style, grappling prowess, and high-caliber submissions. He is the current STRIKEFORCE Light Heavyweight champion and has a record of 35-8 with his last victory coming against Rameau Thierry Sokoudjou at Affliction: Day of Reckoning fight earlier this year.

"I am very excited to have Fedor, the number one heavyweight in the world, as one of the top fighters in EA SPORTS MMA,� said Executive Producer Dale Jackson. "He is one of the elite fighters in the sport today and will provide the ultimate competition for our gamers. The EA SPORTS MMA team at Tiburon has been working on the game for over a year already and we will have a lot more great fighters and other exciting news to talk about soon.�

In addition to appearing in the EA SPORTS MMA video game, Mousasi and Sobral will be sponsored by EA SPORTS for the STRIKEFORCE fight.

* As ranked by Sherdog.com