Pixelvista: Knights in the Nightmare. And yes, this is LONG.

1:02 PM on 07.29.2009 (server time)    0
Welcome everyone, to my semi-daily rantview: Pixelvista. Pixelvista is where I will be sort of reviewing games, but not to the extent of a review. More so, giving impressions of it but at the same time finalizing the opinion with detailed justification. So welcome to Pixelvista: The Art of the Gaming Horizon. 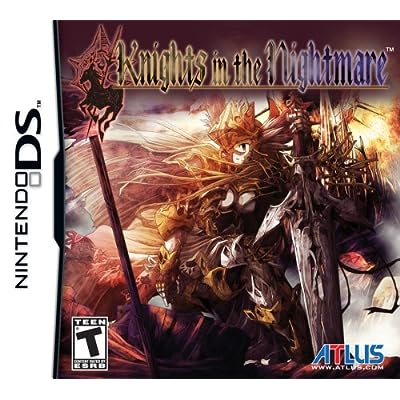 Knights in the Nightmare, is without a doubt, one of the the most elegant, beautiful and innovative games that I've ever played. Outside of the classic, The World Ends With You, no other DS game has come close to providing such a fresh, innovative experience and taking complete advantage of the system's hardware until now.

KitN is the result of when you toss real time strategy RPG, bullet hell shump, tic tac toe and a slot machine in a blender. Sounds complicated, right? Not really. Knights opens up with a tutorial that's about an hour or so long to teach you the necessary steps of playing the game. However, in this Pixelvista entry, it will not take that long. I will do my absolutely best to explain this game in words.

As Episode IV, of the Dept. Heaven series that was preceded with Riviera: The Promised Land and Yggdra Union, which were both released on the GBA and PSP, you take control of a wisp, a flying spirit that has the ability to possess things, more specifically, your units. The game is divided up between the touch screen and the top screen. You use the stylus to control the wisp on the battlefield, possessing units at will. Before each battle turn, you will have a predetermined number of units to set in preselected slots. The units are Warriors, Lance Knights, Priestess, Wizards, Archers, Hermits and Duelists. Each unit has different attack properties. For example, the Warrior can only face northwest and northeast, and the Hermit can only face southwest and southeast. You have quite a bit of strategy here when placing your units.

Once your units are set, you equip up to 4 items. Weapons are class dependent as expected, and you also obtain in the game, key items. Key items are items used to recruit new knights for your roster(the game has up to 100 to recruit) Recruiting new knights is a definite must.

Once all units and items are set into battle, it begins. You have something called an Encounter Reel. Think a slot machine. It appears before each battle(sans the first turn) and allows you to "strategically" place where your enemies will and what they will be. The objective of the game is to defeat the enemies and score KILL horizontally, vertically, or diagonally in the FOR VICTORY table that appears on the top of the screen in battle. 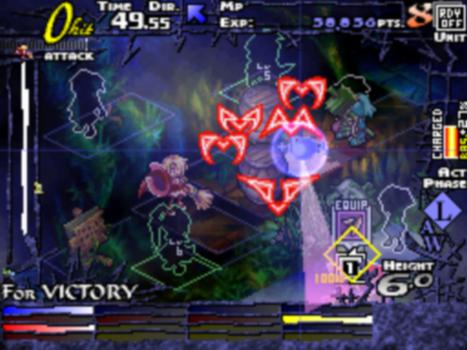 Every time you defeat an enemy, KILL is crossed off on the table. Once you defeat all enemies that turn, the turn ends and you go back to the Encounter Reel and select more enemies.

Knights attack and move dependent on the order of the universe. Law, in blue, and Chaos, in red. In battle you have the ability to switch between Law and Chaos at anytime. Most weapons can only be used in either or, but some weapons have the ability to be used in both, but with different effects. For example, the Lance Knight on his or her horse, will attack with a lance stab in Law, but when charging and attacking in Chaos, he or she will move forward two spaces and attack. Law and Chaos bring an unprecedented amount of depth to an already deep game, so you will have to plan strategically accordingly based upon your units and enemy situation.

The actual gameplay you ask? Oh yeah, of course. Using the touch screen to control the wisp, you float around the battlefield, possessing your units at will. You can do ordinary attacks and special attacks by selecting them and holding, which begins charging. Once you've finished charging, they will attack enemies and obstacles in their attack range. However to do a special attack, grabbing of the item in the 4 slots is required, then dragged onto the unit, then charging. Using charged special attacks take up MP. You have up to 9 MP you can store. Every time you attack an enemy, gems and materials will come out. Gems restore your MP and materials are used to strengthen weapons to make them stronger.

Enemies attack by shooting bullets and other things. Most of the time the screen is littered with so much stuff, it gets really ridiculous. So not only do you have to attack with your Knights, you have to dodge bullets as well. Every time you are hit, your units will lose Vitality and time will go down. You have 60 seconds per turn to defeat the enemies. If you fail to do so, enemies will gradually recover health(ESPECIALLY during boss battles) and you have X amount of turns to achieve victory. Depending on how many enemies you fight and how large the board is, you can get up to 16 turns down to about 4.

If you win the battle, you gain EXP. and items, which are used to level up your knights, and make your weapons stronger. Your weapons however, have a set amount of Duration. So of course, use it too many times and "break". So you really have to use your items wisely.

Leveling up items is by the use of materials gain in battle. When you level up your items, the damange percentage gets larger and you gain something called Rush Count. Rush Count is a table of 3 columns with random numbers. Depending on the number hit combo you do in battle, a special condition will come up in battle. So for example, if you had a Nameless Bow with a rush count of 44, if you were to do an attack that landed in 44 hits, you would enable whatever that Rush Count special ability is. Making weapons is also a game, as every time you upgrade your weapon, the trust level will go down. If you fail to upgrade the weapon, the duration will go down by 1, and if you keep doing it, obviously it will break. This is especially so for the rare and powerful weapons, which have like a duration of 3 by default. I've had a lot of weapons break on me because of this, so be careful.

You can also transoul units into another one. By sacrificing a unit into another one, the maximum level they can be leveled up to will increase, however dependent on the unit being sacrificed their L.I.(Law) and C.I.(Chaos, these two factors determine how strong they will be in the order) will variable. Also, the race of the unit will determine if the transoul will be successful or a failure. As stated earlier, there are 100 Knights to recruit in the game, so you have a large amount of options.

The game's story is very well done. This will be spoiler free, of course. Everything at the beginning is really disconnected, but as you play, everything will start to make sense. The art design is very well done, like most Sting games. The UI never feels cluttered, but "full", with tons of detail appearing on the screen at once. The audio is superb with nice classical "medieval" style tunes, and subtle, simple but very clear voice acting. The game is very linear with the story telling. There is no overworld to roam, everything plays out in scenes, and is very pacing. Knights has 9 different endings, and even though I don't know how to get them, I would assume they would be based upon your actions in the game. When you complete the game, there is a new game plus option where items and knights only appear in this mode, and you have the option to play the game again through a brand new storyline with a different point of view.

Knights in the Nightmare is a tremendous game in a small little package. It's a shame that most people outside of those who know about the game will play this marvelous wonder of a game. The gameplay is fresh, new and innovative, the storyline is great, the productions are superb, and if you have a copy of Yggdra Union for the GBA, plug it in your GBA slot for some surprises. Knights is hands down my favorite DS game of all time(for right now anyway), and I would totally recommend it. I hope I explained the game very well, as it's really difficult to elaborate on a lot of things, especially in a game as deep as this. I hope you all enjoyed this volume of Pixelvista.
#Community
Login to vote this up!