For anyone who hasn't yet bought Chrono Trigger, it's now only $20 at GameStop and on Amazon! Once I heard that, I immediately went out and bought it. 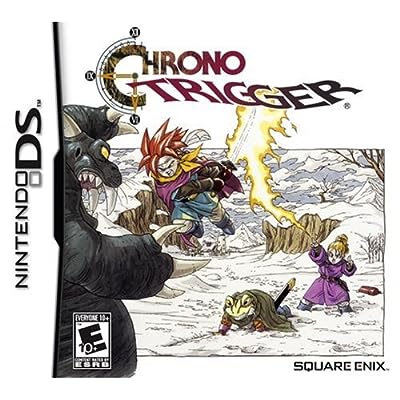 No matter how many people say that Chrono Trigger is the best RPG ever, I still felt weird about paying $40 for it. I'm a Wii owner, and I like to keep things generally legal*, so I buy most of my SNES games for $8. I never had a SNES growing up, and through the Virtual Console, I've been able to play Super Metroid, ActRaiser, and Secret of Mana for the first time, all for only $8 each.

If Chrono Trigger were released on Virtual Console, it too would be an $8 game. Even with the ability to play it on my DS, a box, and a nice color manual, I still feel like I wouldn't pay more than $25 for it.

On the Mega Man 9 episode of RetroforceGO!, the crew were asked if they would pay full price for Mega Man 9, and the universal answer was "no," even though everyone on the show felt hypocritical for saying so. Mega Man 9 might have been my favorite game of 2008, but with Mega Man 2 being released just before at only $5, it made sense to put Mega Man 9 beside it for $10. (Technically, it's $16 for me, since I would whole-heartedly recommend buying Endless Mode, Superhero Mode, and the Special Stage.)

I feel like there's some kind of retro price ceiling. Maybe I've been conditioned to playing retro games for free on emulators, so now I don't want to pay a large price for them. Maybe it's just because I find myself shorter on money these days. Whatever the reason, I have a difficult time buying retro games at a full price. I'm sure hardcore Square Enix fans would have picked it up at full price, but the new $20 price was enough to persuade me to buy it. If you've been holding out, I suggest you take this opportunity to buy it as well.

And a few months from now when Dragon Quest V drops down to $20, I'll be there too.


* With two exceptions: I hearby give everyone permission to pirate Earthbound and Mother 3 without guilt. (Mother 3 has a free fan translation you can download!)
.
.
.
#Community    #DS
Login to vote this up!