Let's show that sumbitch again to make this blog look bigger than it really is: 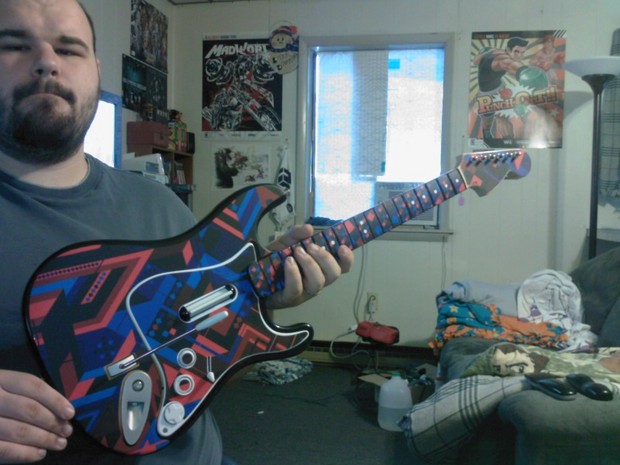 The strum bar is fucked.
How's that for bad luck? Hahaha... Fifty of the things exist and mine is pseudo-busted. I fired up Rock Band to play the Green Day 3 pack. Had some issues with Know Your Enemy, but nothing major. Some overstrums, some missed strums. Then came East Jesus Nowhere which went well for MOST of the song up until that really fast part after the solo. It was missing EVERYTHING in that part and it wasn't my timing because I played the song later on again with my old Guitar Hero guitar and I did just fine. Finally, 21 Guns started and I was getting nothing.

So my problem switched between strumming waaay too much and then not at all. Seemed like the problem cut in and out, but it's not worth risking it to play.
So that's my luck, I finally get my first real win in a Destructoid contest and the strum bar is messed up. But hey, I'm not upset at all. I actually kind of laugh at the situation. In the end, it's not even the prize that matters to me, it felt good to finally feel like a winner on this site and that means a whole lot more to me than whether or not the prize works like it's supposed to. Hell, I think I'm more bummed I didn't get a Dtoid sticker to put on my van than the fact that the guitar didn't work right. And on the bright side, it still looks frickin AWESOME.

In other news, if you've followed my blogs at ALL (or you decide to read back on my previous entries) you'll see that I love the site Goozex a lot. I've posted in the past about some of the amazing games that I've gotten from the site and I wanted to add a quick note in here to mention that Goozex is enjoying it's 3rd birthday. THREE YEARS the site has been active and they've saved a shitload of gamers a shitload of money, not to mention all the rare games that have been traded on there.
I mean really, I've gotten some amazing gems from that site... Black label Symphony of the Night, Nintendo Puzzle Collection, a still sealed Lunar 2 Complete, Tales of Destiny... Hell, I just recently got an import copy of Altered Beast for the PS2!
Bottom line is that Goozex is amazing and if you haven't checked out the site yet, now is the time to do it.
They're good peoples.
#Community
Login to vote this up!