1:29 PM on 07.08.2009 (server time)    0
Hi kids! So as several of y'all know, I'm from Texas, home of the Whopper. We also hosted a little vidja game conference the other day, or several, and I figure I might as well get on here and give a little comprehensive recap of what I did that fateful weekend. I didn't really take any pictures though, so I'll be generously stealing some from the forums and other people's cblogs. 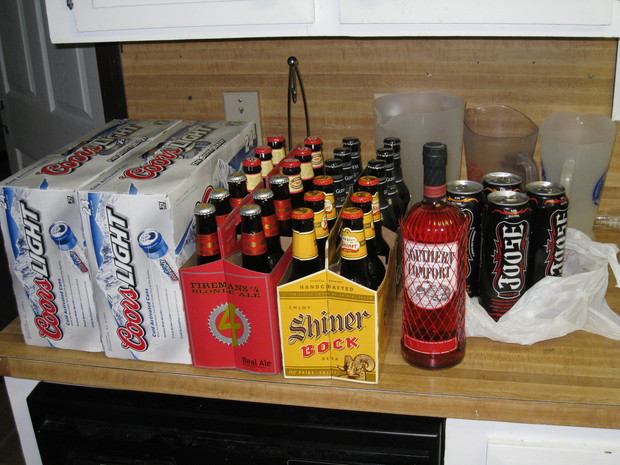 Coonskin and this arrived. I picked up a couple more six packs, we had a few refreashing beverages, and we went to sleep, to dream of tomorrow, to dream of what SGC might entail.

Due to an overzealous roommate, we all woke up around eight in the morning. Coonskin immediately put on his Captain's hat and started drinking, followed by more drinking. I got to see a bulldozer plow into a barrier out in my parking lot, and later we all decided to head out there. Coonskin immediately started to hiccup. It was HILARIOUS. Twenty minutes and ten minutes later, we arrived at the glorious hotel where all the action was to take place. Not knowing where exactly in the hotel the convention would be, we decided to follow the rather rotund female Link walking with a large black man with a shirt that read "GIVE ME A FREE CHICKEN SANDWICH AND WAFFLE FRIES FOR FREE". It was classy.

Following the nerds then led us straight to a large room filled with more nerds, and the gigantic lines associated with checking in for conventions. Being mildly retarded, we decided to go ahead and stand in the back of the longest line. Being not so mildly retarded, but drunk and ready to get this show on the road, Coon soon checked out and found that no, we were not in the right line, we were supposed to be in the shorter line on the right. The one that said "OnSite Registration". As we filled out our cards with information relevant to the current situation I was approached by a suspicious looking gentleman with a "staff" t-shirt on. He apparently had the hook-up, as I made a cash transaction with him for a three day pass for the low, low price of twenty dollars, while the other kids paid forty for theirs. The only thing I had to agree on was to be called Aaron for the next few days.

While this shenaniganary was going on, Coonskin was busy flirting with Ogu, who had made his way up from good ol Mexico on a Greyhound bus. Being the racists that they are, Greyhound made them hang out at the bus terminal overnight because, and I quote, "Mexicans smell". (Not an actual quote). They then proceeded to get lost and were never seen again that day.(Also not completly true).

We then were set about wondering, just where is this "Jim Sterling" fellow that said he was making his way out to the convention. Not two fucking seconds after thinking that, the sea of nerds opened, and there he was. After some pleasantries with Coonskin, I introduced myself, and was told that no, he will not be stopping the over-italics use. He then had to go exploring, as he was apparently the only press there, so we decided to check out the famed "console room" of SGC. It was a large, dark room with three projectors, one playing Rock Band, one playing Street Fighter 4, and one playing Soul Calibur 4, with many, many side moniters with different games and systems playing on them. Cool, right? No, as this is probably the first convention many of the kids playing there had been too, resulting in them camping out in front of games for extreme periods of time. So, defeated, we gave up and left the room. Jim Sterling meet and greeted fans in the hallway. Internet celebrity, thy name is Sterling.

I imagine that everyone here has seen the post on the cartridge blowing contest, if not, please don't waste your time, it was horrible. Good fun for the under sixteen crowd, I'd imagine, boring for us not wanting to stand because all of the under sixteen crowd was standing. All we could really see is if the cartridge showed up on the screen. Meh. After that was over, we ran into the lovely Infinity's End, whose usage of the word putz was remembered and chronicled by Sterling. As my mind is completely wiped out by the massive amounts of alcohol consumed and time passed, we'll just skip ahead here and say that throughout the course of the day we ran into portastad, Bango-Skank, Dimly, Milk-Man, and others who really didn't go to Dtoid. Also, electrolemon, who recieved the shock of his life when Jim decided that damn the torpedoes, he was gonna nomnomnom on him right there in the hallway. By that time, roomie had gotten fiesty and ready to go, so without further ado we packed into the cars and headed back to my place.

It was fun. Destructoid Panel at my house, vidja games in both rooms, massive quantities of beer lost in the shuffle. No pics, please.

If anyone has a picture of coon sleeping, it would go here.

Once we roused Coon from his rightful place on the couch, we proceeded to head back up to the convention to see the Jack Thompson debate. Running into Sterling at the gas station across the street (convenience charges be damned hotel!) it was made apparent that the Q and A was actually pretty good, and I should've made it up there for that. Meh, whatever. Seeing the massive line for the debate, I pulled up a spot on the floor with Bango, Port, and others, while InfinitysEnd sat out with his massive guns unleashed, daring others to challenge his Tetris prowess. None would win.

After it was announced that the debate was 18+, the line thinned out some. Not enough for us to hope, but enough. After the line went in, someone came and announced that there was room for more, so, being the oppurtunists that we are, we made it in to actually see the debate. It was much better than I'd thought it was going to be, and JT came across as actually being level-headed, intelligently worded, and not crazy. Good times. After the debate, we said goodbye to Jimmie, and InfinitysEnd, being the fanboy that he is, got this picture of us:

...which he is probably cut out of, so click here.

Gathering Ogu and the rest of the remaining crew, we headed back to my place.

For the convention, for what it was (a first time convention held in a small hotel by a video game website), the turnout was very good. It had a lot of variety and a lot of potential to be something bigger and better next year, which is why I'll go back. It seemed like most of the people there were having a good time, but in my mind it needed just a little bit more direction and focus than it had this year.

Finally, I saw Jim sign an autograph. It was probably the single defining moment of the weekend for him. Well, that or when he dry humped Sonic into getting his picture taken with him.
#Community    #GAMENARPS!
Login to vote this up!