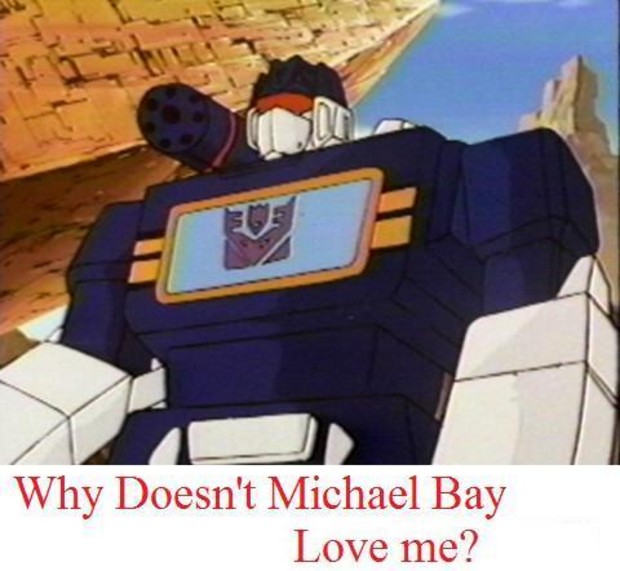 And is he fucking insane? I just saw the latest Transformer movie and I want to know what the fuck he was thinking having Skids and Mudflap: two of the most racist characters in a movie I have ever seen, in that movie. Whoever designed those characters should be fired not only for the blatant racism but for making two of the most irritating movie characters I have seen in years. Overall, I found the movie enjoyable (even though Soundwave was barely in it) but these two characters bring an otherwise decent action flick down. Hell, I don't even know why the people who worked on this movie went through all the trouble of making two new transformers when they could have just dug out the originals like Cliffjumper or Wheeljack. Hell, two movies have gone by without Prowl which I find really fucking odd.

Meh, either way I did get enjoyment out of it, I just wish they put more emphasis on the other autobots (I don't even know who two of the Autobots in the movie are) and not those two abominations.

And why did Devastator have testicles?

2. Brad Nicholson wants to put Linde through a wall.

3. The Magic XBLA game really fucking pisses me off. Why can I only add/remove the cards I unlock and not the cards in the original deck? I wouldn't care if it wasn't for the fact that some of the decks are very poorly constructed, the Elspeth and Sarkhan Vol ones in particular. Not to mention some of the better decks could have been made better with some editing. Why the fuck does a deck that has a whole bunch of low costing creatures need a playset of cards that let you search for lands (the elf deck)? And why the fuck do I have to dig through the settings so I can assign damage manually? Bleh, the whole game feels a little heavyhanded in creating a recreation of Magic.

4. The ghostbuster's game is pretty good. I highly suggest a rental for those of you who haven't played it yet and are fans of the movies. Hell, if you liked any movies in the 80's I would suggest you play this game. Everything is better with Dan Akroyd.

6. I am extremely disappointed with the Walking Dead comic. People kept reccomending this series to me so I picked up the first graphic novel and I don't understand why people find this series so amazing. It just seems like a mediocre mashup of every zombie movie ever. Although I guess the fact that I am really tired of zombies at this point could have something to do with my disinterest.

8. deBloo, Zombutler, and Powerglove are going to get their couch fucked with friend invites.

9. Apparently Shia Lebeouf is a douchebag when it comes to the subject of the Wii.

10. Apparently M Night Shamalamadingdong is making a Last Airbender movie. When the fuck did this happen? I didn't hear anything about this until the penny arcade guys mentioned it and it sounds like this was a well known fact for awhile. I wonder what shitty twist ending Shyamalan will stick on this movie.
#Community
Login to vote this up!