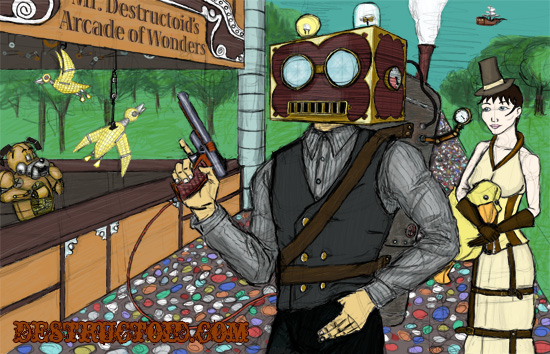 The question at hand is, "What does Steampunk mean to you?" As one who lives for gaming, I see the answer to that question as I do all questions of meaning: through the veil of videogames. I think of Violet Beauregard, who entered the mythical chocolate factory only to ask, "What kind of gum you got?" Throw me into a world filled with mechanical prestidigitation and I'll simply ask, "What manner of games do you possess, dear chap?"

In a world where Benjamin Franklin neglected to merge kite and key to catch lightning in a bottle, video games would not come to be. Not as we've come to know them at any rate. You see, every possible universe has their own Yaniero Gonzalez (but only one per alternate timeline- Don't get greedy). In a steam-powered world as in our own, Niero has got our backs.

He would make gaming possible in that world where sophisticated mechanical technology powers all manner of modern gizmos, doo-dads, and thingamajigs. Niero would make it his business to seek out the games, the entertainment, the tests of skill and daring-do. What didn't exist, he would create himself. When his quest was complete, he would bring it all back to the world at large.

Niero would bring together a community of gamers and inventors; artists and engineers. As time marches onward, his dream will grow and grow. With it did the community and the marvels of their creations.

As impressive as is the first game which you'll find in Mr. Destructoid's Arcade of Wonders, "Hunter of Ducks", just wait until you get to the newly unveiled "Colossal Shadows of the Ancient Gods" attraction.

A full resolution version of this image can be found here.

This one illustration took me over thirty hours to complete from start to finish. It started with a simple idea: Mr. Destructoid in a Steampunk style. I wanted to go all out with this project. I wanted to put as much detail and shading as I could to make this much cooler than any of my previous illustrations. Maybe even something borderline good. 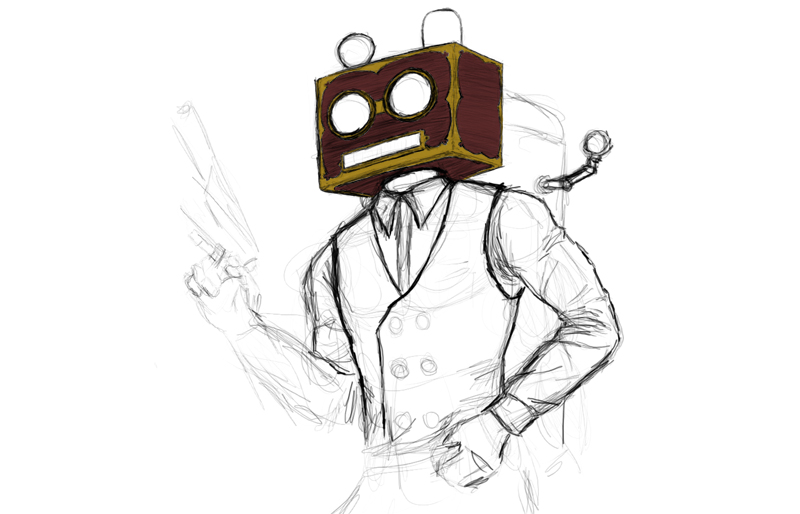 As I continued to work on it, new ideas kept popping up. Why not throw Colette in as well? How about tying it into games in some way? Colette's addition proved to be a lot of fun. It wasn't just a simple cartoon-y pic.

I actually needed to design an outfit for her. Borrowing all that I could remember from Project: Runway, I went to town with my Steampunk Colette Bennett concept. It was actually the third design that I ended up using. Then, I needed to figure out her hair. This also took a couple attempts.

Then came the attempt to tackle the gaming aspect. How could video games exist without electronics? My first inclination was to go with a shooting gallery. Title it Dunk Hunt and call it a day. I sketched that into the photoshop drawing. But that seemed so dumb. The idea that followed really changed the entire project around. Why would there be anything special about an acient shooting gallery? We've had those for over a hundred years. This needs to be epic in scope. The shooting gallery became a full-on animatronic version of Duck Hunt. This meant much more designing. Starting with the booth itself. I had to study up on Victorian architecture (and found that it's an absolutely horrid style with all of it's needless gaudiness).

Then came the characters themselves.

The really awesome thing about Steampunk is that it's a mixture of Sci-Fi technology that can work and exist because the creator says so, and obsolete technology. You can't just throw something together and say, "Here. This works. Accept it at face value." You have to make it plausible. Extra thought needs to go into the design so that when people look at it, they can get an immediate impression of how it might work. It really gets the brain working on neat concepts for tiny details that people might not even notice at first glance.

So, I'm putting this all together in the middle of a 12-day work week. I used up nearly every second of freetime available to me (not counting the hour that I played against Y0j1mb0 in Street Fighter IV), and even now as I finish writing this, I've been awake just over 24 hours and have been at it nearly 14 hours since I got home from work. Just about everything in that illustration was drawn, colored, erased, redrawn and recolored again. This really is the coolest thing that I'[ve ever drawn (granted from a real artist's standpoint it's not so great), and I'm really proud of it. Hope you enjoyed seeing behind the scenes of it's creation.

In the gallery you'll find full resolution versions of the final piece (perfect for 900x1400 widescreen desktops ;) ) and some of the daily works-in-progress. I want to thank a few people. First, to my little brother, Paul. He gave me an inexpensive but awesome tablet that has totally changed my way of drawing (for better and for worse). This couldn't have happened without him. To Y0j1, who encouraged me to really make this a finished work when I would have been content to stick with Niero and Colette against a solid background. Finally, to John D., one of my best friends for over 15 years now. He gave me a solid critique and I was able to use at least half of his advice (even though it meant completely scrapping the helmet and starting over at the last minute).
#Community
Login to vote this up!