New Super Mario Bros. Wii still looks kind of bad. I know that pretty much everyone loves Mario (I grew up with SMB and SMB3 as a kid), and I'm sure that playing four player Mario is definitely going to be a blast. But in today's day and age, why does a top-tier Nintendo title look like an upscaled DS game?

Now I've been predicting for some time that the 2D Mario games would find their way back on consoles. After all, the Wii has shown that there is a huge market for lapsed gamers who used to play NES games, but never really got into 3D gaming. Capcom has already proved successful taking the plunge creating modern 2D games with big old school franchises with Bionic Commando: Rearmed and Mega Man 9. It would only be a matter of time before we got similar 2D revival attempts from Mario and Sonic.

But why can't a classic gaming revival look something more like this? 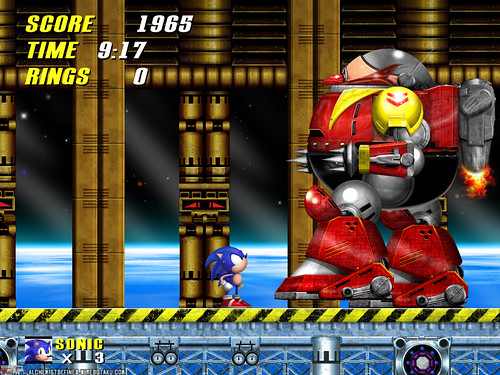 ...why instead, do we get a Mario game that looks like this?

It just looks kind of bad.

But enough bitching, because one of the biggest surprises of E3 for me was the announcement that Epic Games was standing behind Shadow Complex. (Okay, so it's technically made by Chair, but Chair is part of Epic Games now. So there.) Cliff Bleszinski was up on stage talking about a Super Metroid-style game running on Unreal Engine 3. Needless to say, it looks pretty good, despite having that militaristic, sci-fi look (not that there's anything wrong with that, it's just that many old school gamers tend to like looking at... ya' know, actual colors). And considering it's based on the 2D Metroid series, I'm willing to bet that Shadow Complex will be an excellent game.

And then there's Muramasa: The Demon Blade, which is developed by Vanillaware, and being released by Ignition Entertainment. Bless their hearts...

This console generation needs more Muramasa. Many games these days are preying on the nostalgia of old-school gamers, and so I'm surprised that we're only starting to see the beginnings of high-definition, 2D sprite-based games. In Dtoid's E3 preview of Muramasa, Ashley Davis was, "captivated by how beautiful the game is in person. It's like a huge moving watercolor painting."

Muramasa will definitely be a day one purchase for me, despite the one glaring flaw that has shown itself in every gameplay video:

Anthony Burch: "I thought [the controls] were almost too fluid for their own good. Every single attack is goddamn devastating, and they're all so fast that the enemy has no chance to react... It's insanely fluid and fun for a little while, and certainly looks great, but I literally did not take a lick of damage the entire time I played up to the boss fight... Literally did not get hit once."

Every time I see footage of people demoing the game, it looks too damned easy. However, Wikipedia reassures me that "Unmatched Mode focuses on character leveling as opposed to action, whereas Carnage Mode is more action based, recommended for skilled players." I'm assuming that they keep demoing the game on easy mode, so the enemies don't really put up a fight in any of the gameplay videos, and that there is a more difficult mode unlocked from the start of the game. I haven't decided whether this is good or bad marketing to make the game look so easy, but I know that my first playthrough of this game will be on the harder difficultly setting. (Kind of like how you already knew you wanted "Advanced" controls in Metroid Prime 3.)

But Ignition hasn't stopped there, and they're also the same people bringing over King of Fighters XII, which is the best looking 2D fighting game I've ever seen. (Justification for such a statement is in my previous post.) Not only that, but it's a slower, more Third Strike-style game (which SFIV is certainly NOT), and it's going to have online play. Yes, 2D fighting games already made their comeback last year with HD Remix and Street Fighter IV, but it's wonderful to see more games jumping on, with 2D games like King of Fighters, BlazBlue, Marvel vs. Capcom 2, and Tatsunoko vs. Capcom replacing the series of Soul Caliburs, Tekkens, and Dead or Alives that have been ruling fighting games for the past few years.

It's happening slowly, but 2D gameplay is making more of a place for itself in today's high definition world. "Sonic 2 HD Remix" may one day become a reality. We all know that Capcom is one of the leaders of the 2D revolution, but seeing Ignition and Epic standing behind next-gen 2D games was definitely a pleasant surprise ...and Nintendo even opened their E3 press conference with a 2D game on their main console. Despite the fact that it looks like an upscaled DS game.

If it's any consolation, the female character in Muramasa is named "Momohime," which directly translates to "Princess Peach" in Japanese.
.
.
.
#Community
Login to vote this up!